From Southern Air to Subway Fare: My Long Journey Home

I stood in the hall of my seedy dorm in the left armpit of Virginia, staring at the calendar on the poster board.

In purple and gold letters—the most tacky combination conceivable—it read, “September 19: Last Day to withdraw from JMU (but don’t!)”

Oh yeah? Is that a challenge?

It was the end of the second week of classes and I had been at James Madison University in Harrisonburg, Va for 20 days. Orientation week was a carefree haze and after four years at an all-boys Jesuit high school in New York, I was entranced by the newfound freedom of riding in a pickup truck tailgate, $4 packs of Marlboro Reds and, droves of blonde girls named Lexi, Kaylah, and Morgan.

But once classes started, I wondered if I was the only one there not just because my parents could afford to send me, or because I wanted a job, but because I wanted to learn and question and ponder and think critically and wonder and argue with professors and disagree with classmates and push arguments to their limits. I still want to.

After toiling over the college process, I refused to give up, accept my position in life, and invest the next four years—potentially some of the best of my life—in a plastic-handle-vodka induced fog, coasting through 300-person lecture halls without a purpose for my education.

To be clear, I have no gripes with plastic-handle-vodka, but during the day I want to read Plato, Hemingway, and Vonnegut. Where’s the fun in unwinding without being wound up in the first place?

For parents weekend, I went home, having no intention of planting any roots on campus or subjecting my parents to the nine-hour drive on the two-lane trucker highway away from civilization, through West Virginia, and then back into regular Virginia just to tailgate with people who flew purple-and-gold JMU confederate flags—once sold in the bookstore—or rub elbows with mothers who shotgun beers for their daughters’ Snapchat stories.

There are two ways to escape the Shenandoah Valley: coach bus or railroad. The Amtrak station is a $60 Uber ride away, trains only run on Saturday morning and they don’t return until Tuesday. In order to maximize my time at home, I opted for the bus that picked up in Harrisonburg at 2:30 a.m. Friday morning and arrived in New York at 11:00 a.m.

When the bus pulled in to pick me up in the parking lot of the local Chinese restaurant, it screamed of a tragic headline of an unlicensed drunk driver flipping his bus, and there I was, the enterprising college student with so much potential. I could picture my obituary in my mind, and most upsetting was that I would be identified as a freshman at JMU. The bus smelled like the  apartment of the guy from an anti-smoking commercial, the one who used to love swimming.

The bus dropped me off in the heart of Chinatown on Pike Street. The other customers were what could be imagined of people who take buses that stop at 2:30 a.m. in Harrisonburg, Va. On Sunday, I walked into the bus office and showed the lady at the desk the confirmation email on my phone. She scribbled a few characters on a sticky note and said to go wait across the street and hand it to the driver.

In that weekend, plus the three other weekends I journeyed back to New York, I toyed with the idea of living at home. Things seemed much more relaxed than when I was in high school and I didn’t hate the idea of bumming for a semester while figuring out my life out. But I was unsure of what I wanted to do next and I was terrified of moving back home and never escaping my mother’s basement.

One weekend that fall, while visiting my friends at Georgetown, I had an epiphany as we explored the city, rode the metro, enjoyed a Jesuit homily and ate Pho—Pho tends have that effect. Some of my best ideas began as bowls of noodles with twists of steam drifting up my nose and into my brain. Jesuit homilies work similarly.

It was in Georgetown, when I wasn’t belligerent before noon on a Saturday in one of the generic fraternity townhouses built with the same architectural vision as an assisted living community, that I realized how badly I missed my Jesuit high school—the minds it attracted, the friendships it fostered, and the sense of purpose it challenged students to discover.

In high school, when I was leading retreats, talking with Jesuits after class, and participating in Campus Ministry, if you asked me what mattered to me, I would have said, “I don’t know.”

My answer changed after being in an environment in which work was not done Ad maiorem Dei gloriam, and absent from the four year plan was cura personalis, and I was challenged to do well on tests instead of to pursue the magis.

I decided I wanted to transfer to a Jesuit university, and because I knew this by Halloween, I didn’t want to spend six more months forging bonds I’d eventually dissolve.

One of my friends from JMU, ‘Kaylah with an H,’ still says I should have stuck it out, and I will acknowledge that the first week of second semester I could have found something to make me fall in love with the place. But only a coward doesn’t follow his gut.

I decided to withdraw after the first semester. On Dec. 12, I unpacked my room, unsure if I’d ever live in a dorm again. Rather than enrolling in the local community college for the semester, I glamorized my scenario a bit and enrolled for the semester at CUNY Hunter College on Manhattan’s Upper East Side.

At Hunter, as a straight, white, privately educated, Catholic male, I was the bane of everyone’s existence. My very being was upholding Judeo-Christian colonial standards that disenfranchised millions and as a benefactor of the broken system, I also perpetuated it. Sorry about that guys, it was me.

For the first time, I found myself before teachers whose worldviews did not include a belief in the chief supremacy of the Catholic Church. That isn’t to say my previous 13 years of Catholic schooling were shaded from scientific inquiry or doubt, but after examining criticisms of Catholicism, we typically came full circle and ended up recognizing the absolute legitimacy of the Papacy, despite the Church’s flaws.

In classes at Hunter, I was the lone voice pointing out that for hundreds of years, the Church fostered much of the world’s scientific studies, and that the “misogynistic” Church was indeed responsible for abolishing arranged marriages in Europe in the 11th century by instituting the sacrament of marriage, which requires both spouses consent and desire to be in holy union.

In high school, I loved pushing buttons and asking religion teachers if born-in-a-manger Jesus would approve of the grandeur of the papacy. But once in ideological freefall, I found myself grabbing on to what was most familiar.

In between classes that semester, my favorite walk to kill time was to St. Ignatius Loyola Church on 84th Street and Park Ave. to take refuge from the courtyard at Hunter, where activists canvased for donations to Planned Parenthood and the ACLU.

On those walks, amidst the unfamiliar faces bustling around me, the marble cornerstone church was a beacon of familiarity—a reminder that I could always go back to the Jesuits.

In May, I was one of the 75 students admitted to transfer to BC. With a renewed sense of purpose, I happily accepted the offer, thrilled to return to an environment in which work would be done Ad maiorem Dei gloriam—for the greater glory of God. It’s never too late go home. 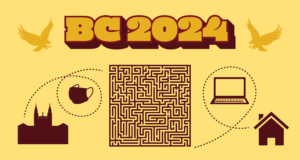