Home » On Union, BC Sides With Trump 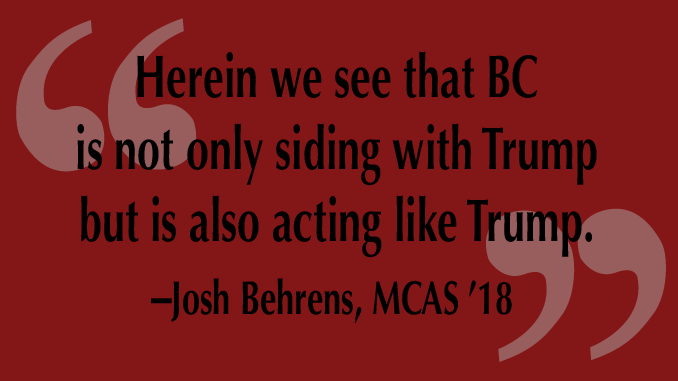 On Union, BC Sides With Trump

Last week, the Boston College administration sent out an email to the entire BC community entitled, “Update on Graduate Student Unionization.” While many undergraduate students may have simply archived the seemingly monotonous email, the six paragraph-long message is an elaborate attempt to cover up one simple fact: BC is siding with Trump.

For the uninitiated, hundreds of graduate workers at Boston College have been organizing a union for three years. Grad workers are graduate students who work for the University in various roles such as researchers, TAs, and professors. BC grad workers began to unionize in 2015 following an effort by the University to take away the health care of grad workers who are here for more than five years (even though the average Ph.D. student spends 8.2 years completing their dissertation). Without a union to fight for them, BC grad workers realized that BC could take away benefits like health care at a moment’s notice. After a campaign started and led by BC grad leaders, BC grad workers voted democratically to unionize last September.

Despite this, BC does not believe grad workers have the right to unionize. BC filed an appeal with the NLRB last year in order to have the Columbia decision struck down and classify graduate workers as students, not workers. In essence, BC is attempting to stop the BC grad union from forming by claiming the workers that research in BC labs and teach in BC classrooms are not employees. You have to read between the lines to understand why BC is appealing the decision.

The 2016 NLRB that made the Columbia decision was staffed with Obama appointees who were pro-labor. Now, the NLRB is staffed with anti-labor Trump appointees who BC hopes will undo the Obama-era decision and restrict grad workers from unionizing. In continuing to fight for the appeal, BC is betting on Trump’s appointees. BC’s anti-union argument has two components: 1) BC believes grad workers should not be able to unionize because they are not workers; 2) BC has a religious exception to unionization.

BC’s first assertion that grad workers are not workers not only goes against contemporary legal precedent, but is also demonstrably false. Grad workers teach and research the same as any professor. They are the backbone of this institution, doing the thankless labor that allows BC to continue rising in the ranks.

Secondly, the claim that BC is ‘religiously exempt’ from labor laws is utterly laughable. Besides the fact that a 2015 case against Pacific Lutheran University stated that religious institutions are not exempt from labor laws, the Catholic Church has a long-standing theological tradition of fervently supporting workers and labor laws. The U.S. Catholic Bishops (USCC) stated in 2007 that, “Catholic social teaching supports the right of workers to choose whether to organize, join a union, and bargain collectively, and to exercise these rights without reprisal.” BC is spitting in the face of the Church’s staunch solidarity with workers’ rights when it tries to crush the grad union. Even more damning, U.S. Catholic Bishops said: “No one may deny the right to organize without attacking human dignity itself.” It’s clear that BC is attacking grad workers’ human dignity by denying their right to organize.

Herein we see that BC is not only siding with Trump but is also acting like Trump. BC is deliberately skewing the truth to push its own narrative, something our president is an expert at. Wednesday’s email was a clear distortion of facts. Masquerading as a fair negotiator, the email is a smoke-screen that disguises the bare truth that BC doesn’t want its workers to be democratically represented and will pursue every legal avenue to deny that right. Trump’s loose relationship with facts is echoed in BC’s unsupported claims like, “the union persists with its campaign of disruptive and disrespectful conduct that too often interferes with the rights of others in our community.” The email does not contain any evidence to back up this ridiculous assertion. All of the demonstrations the union has held have been respectful and non-disruptive – like their recent silent work-in at O’Neill Library. Furthermore, it is a legal right for all unions to be able to hold demonstrations at their workplaces. To deny this would interfere with the rights of the grad workers.

BC is also cloaking their anti-union stances in religious dogma, something Trump does with his purported Christian faith on a regular basis. In opposing the grad workers union by claiming religious exemption, BC is using its Jesuit values as a cudgel to beat down some of its most vulnerable workers just like Trump uses Evangelical values to beat down some of America’s most vulnerable citizens like the transgender community.

I am not proud to be a part of an institution that is siding with Trump, that is denying the legal right of its workers to unionize. BC is not only siding with Trump by relying on his NLRB appointees, but is also adopting his same sleazy political strategies of skewing the truth and cloaking hateful policies in religious dogma. This PR stunt will not work. The BC community will see through the administration’s smokescreen and stand in solidarity with our professors, our researchers, and our peers.

3 COMMENTS ON THIS POST To “On Union, BC Sides With Trump”