Home » Go Figure: Why Can’t BC Win Away From Conte? 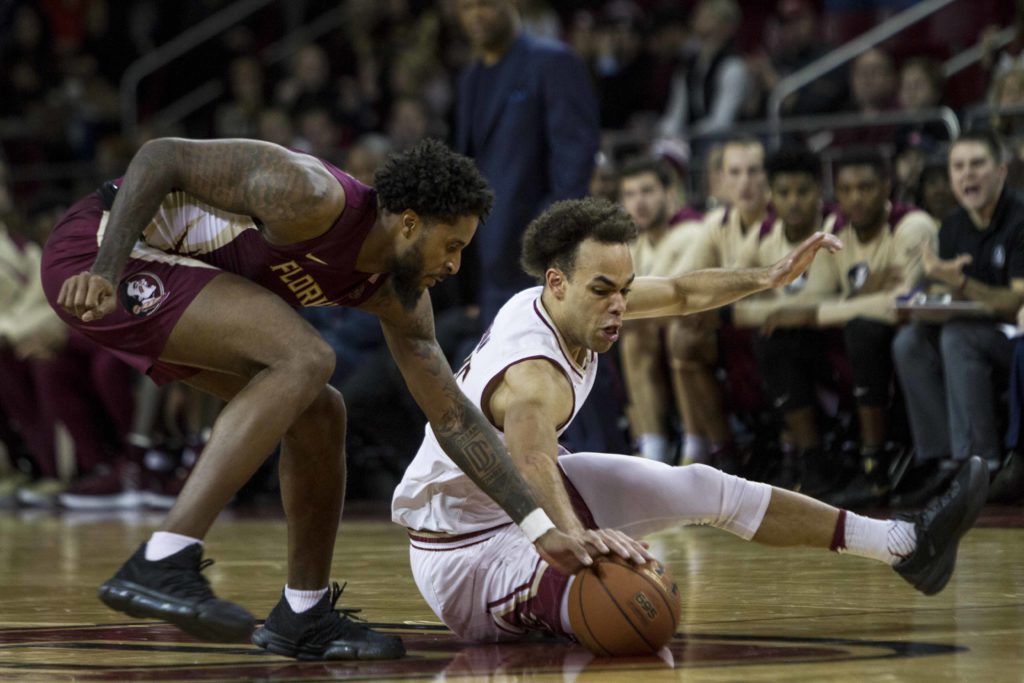 Go Figure: Why Can’t BC Win Away From Conte?

Boston College men’s basketball has already eclipsed the 10-win mark for the first time in three years and won more conference games—including upsets of Duke and Florida State—than it had in the previous two seasons combined, enjoying its best start since the 2010-11 campaign. Junior guard Jerome Robinson has been lighting up the ACC, as the Eagles (13-8, 3-5 ACC) have overcome the early-season loss of Teddy Hawkins to vault into potential postseason conversation—a slim 1 percent chance to make the tournament, per TRank, is better than none.

But, any hopes for postseason success currently seem unlikely, with BC facing an uphill climb. Five of its remaining 10 games are on the road, where BC hasn’t thrived in recent years.

The last 22 times the Eagles have played a conference opponent on the road, they’ve lost. There’s not a lot in college basketball that’s a sure thing, but an 0-4 start to this season means that one has to look back to March 5, 2015, for the last time BC managed a ACC road victory.

It’s not just conference road games, though, as BC has dropped six of its seven games away from Conte Forum this season. The struggles away from home have been costly—the Eagles fell short of potentially huge wins against Virginia and Louisville, matchups in which they either faltered late or dug too big of a hole from the outset. The 22-game streak has included games decided by as few as one point and by as many as 32.

The makeup of the team has obviously changed over the last two years, but still—what gives? Through eight conference games, the Eagles look like completely different teams at home and on the road.

The offensive struggles, it seems, can be attributed to BC’s apparent shift on the road from a potent three-player offense to a more one-dimensional attack, offset by struggles by the other two. It only takes a simple look at the Eagles “Big Three” of Robinson, Ky Bowman, and Jordan Chatman—who account for 64 percent of the team’s scoring so far this season—to recognize this.

First: Bowman. The sophomore guard took an arguably big leap from a pure scorer to a more balanced player this season, averaging over five rebounds and assists per game. However, the road—not just in ACC play—has brought out the worst in him.

As you can tell from the table, Bowman has seen an uptick of turnovers and fouls on the road at the expense of setting up his teammates. He’s also shooting almost seven percentage points lower, a likely product of forcing shots as he attempts to work out of mid-game slumps.

What really costs the Eagles is that it’s not just Bowman who’s inconsistent on the road. Chatman, too, has dramatic home-road splits. The sharpshooting guard is incredible at home, posting an impressive 51-percent mark from 3-point range. Away from home, that dips to 40 percent—still the mark of a great shooter, but nonetheless resulting in almost three less points per game. He’s cleared 15 points in six separate home games, but has done it just once on the road.

Without any bench depth, having two of the team’s top scorers struggle offensively at times is often too much to overcome—despite the best efforts of Robinson, who is actually averaging a point more per game on the road than at home as he tries to put the team on his back. Robinson is getting to the rim with ease, taking almost three more shots from within the 3-point line per game. Still, there’s only so much he can do.

His efforts are countered by the team’s collective defensive woes. Compare the Eagles’ last home win over Florida State and their most recent loss to Syracuse at the Carrier Dome. In the former, BC beared down on defense and held the Seminoles to a 39.8 effective field goal percentage, including a putrid 19 percent from 3-point range.

Syracuse, however, posted a ridiculous 67.7 effective field goal percentage against the Eagles, breaking through time and time again en route to a convincing win. It’s a clear tale of two games, as BC wasn’t able to do anything defensively to contain Syracuse.

The combination of offensive struggles from Chatman and Robinson with frequent defensive breakdowns has made any trip away from Conte Forum tough. Yes, BC kept up with UVA, but the last three road games have been decided by an average of almost 19 points. With two winnable games on the road looming against an injury-plagued Notre Dame team and cellar-dweller Pittsburgh, the Eagles are looking to end the skid at 22 games and gain momentum entering the homestretch.