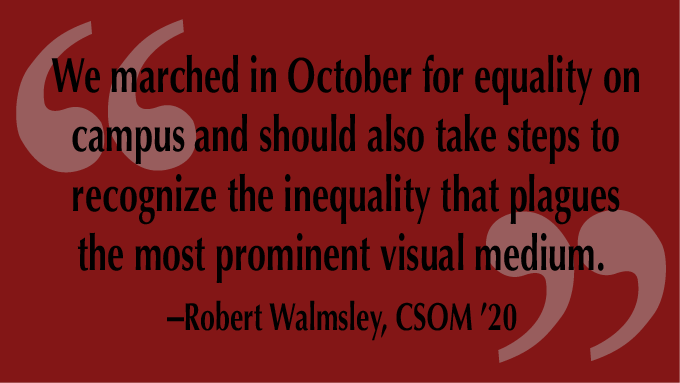 I sat cramped in a small theater ready to indulge in Guillermo del Toro’s fantasy drama The Shape of Water. The film’s aquatically lyrical soundtrack filled the room in the title sequence, and the stage was set. A few scenes later Elisa, the protagonist, and Giles, her neighbor, turn on the 1935 Shirley Temple flick The Little Colonel on a small TV set. A patented Temple dance number is shown, where her butler, Bill “Bojangles” Robinson, teaches her to tap dance up a set of stairs. The scene is fun and exhilarating, and sets the stage for a film that touches on the magic of cinema and the power of defying conventions.

There is, sadly, another meaning hidden beneath: Robinson was an oft-stereotyped actor who began his career performing in minstrel shows. He danced and talked in a way that perpetuated the racist image of the black community that white America saw fit. Just last year, I would have glanced over this small detail.

I grew up in the small, white—like, 97 percent white—farm town of Stratham, New Hampshire, where I barely connected with anyone that didn’t look like me. When I came to Boston College, not much changed—well documented by many a meme on a certain social media page. I simply wasn’t experiencing diversity, nor the dialogue that comes with it. It was Stratham all over again. At least it was, until the racial incidents on campus showed me what can happen in a white-washed environment.

The discussions that followed altered my perspective tenfold. I worked through the issues with my professors and friends, but talking with classmates of color truly brought the reality home. There are racist incidents like the ones that occurred on campus, yes, but there was also an institutionalized, subtle racism. It’s quiet, hidden, and ingrained in the American psyche. Now I’ve discovered this is still evident in the white-dominated industry of Hollywood, not just in older films like The Little Colonel.

I have loved and analyzed films ever since I laid eyes on the silver screen. I tracked my favorite stars, monitored when the the next PTA masterpiece would arrive, and always, always followed the completely arbitrary, vain award show season. Safe to say, I was excited to see del Toro’s latest Oscar contender. After Bill Robinson’s inclusion in the first few minutes, however, I kept a watchful eye on the rest of the film’s portrayal of black characters. The Mexican maestro’s films are known to have a political backbone behind the fantastical imagery, and I learned, thankfully, that his new Oscar frontrunner is no different. He comments on the racism and homophobia of the 1960s. His most important call for equality, however, is through the creation of a fully developed black character in Zelda Fuller (Octavia Spencer).

Zelda works as a janitor alongside Elisa at a secret government laboratory in Baltimore and serves as the voice for the mute protagonist. But she is anything but a mere mouthpiece. Zelda is tough, smart, and funny due to her own wit, not at the expense of a joke. She is also given added depth through her relationship with her husband, who she finally stands up to in the end. Most importantly, del Toro wrote a black character who is not a slave, criminal, or domestic—roles disproportionately given to black actors. Yes, she is the only central non-white character, but Zelda stands on her own, with her own character arc, which is a rarity that should be commonplace.

The next film on my list of Oscar favorites to check off was Three Billboards Outside Ebbing, Missouri, written and directed by Martin McDonagh. This film depicts a small Missouri town upended by Mildred Hayes (Frances McDormand), whose daughter was raped and murdered without a single arrest. I adored McDonough’s previous efforts, and his trademark acerbic wit was evident throughout. I was surprised to find, however, the infused political subtext: There is an actual beating at the hands of an officer, and many characters allude to past hate crimes, including the torturing of a black man. ‘Ok,’ I thought, ‘He’s a skilled playwright, he can manage these different themes and tones.’ But I found, using the same newfound scrutiny I utilized while I watched The Shape of Water, that the politics infused in the film were a facade: McDonough crafts one-dimensional black characters that are thinner than the pages on which the Irish scribe wrote this hypocritical morality tale.

The first two black characters introduced in Three Billboards are Jerome and Denise, although their names are hardly mentioned. Jerome helps put up the titular billboards, twice, with the second having added dramatic heft. Denise is a co-worker of Hayes, and seemingly her only friend. Her sole impact comes when she is arrested for possession of marijuana offscreen, which is just a narrative tool to increase Hayes anger. It’s also a comment on mass incarceration, no doubt, but I never thought about her because I didn’t know her, so the connection was not earned. I kept thinking, drawing from my experiences in October: ‘Does this really count as inclusion?’

Toward the end of the film, a black replacement police chief, Abercrombie (Clarke Peters), is introduced out of thin air. The only purpose he is given is to turn the proverbial tables on the racist police force by forcing them to see a black man in charge—he operates as a convenient stand-in.

The black characters in Three Billboards are used as canvases to paint the maladies of the current political landscape of America, but lack the multiple dimensions that are representative of real, diverse people.

The Academy of Motion Pictures established itself as a forward thinking association by voting Moonlight Best Picture in 2017 and delivering a diverse group of nominees this year. Both The Shape of Water and Three Billboards attempted to meet these progressive standards and were rewarded with 20 combined nominations. But do not fall for the armchair liberalism of the latter. When you watch a film, political or not, think about how each minority character is portrayed. Do they have an arc? Do they go beyond a stereotype? We marched in October for equality on campus and should also take steps to recognize the inequality that plagues the most prominent visual medium. Guillermo del Toro understands the issues of black characterization in film, while Martin McDonagh extends the objectification that plagued Bill Robinson into the 21st century.