Home » Unexpected Encounters with Versions of Myself
Metro, Column

Unexpected Encounters with Versions of Myself

His figure drew into focus as the waning afternoon light silently sunk below the courtyard wall where he was now consulting the day’s edition of La Repubblica. The dark tint on his aviator sunglasses hid his eyes, but not the bolded headline regarding the annual Venetian gondola race. He wore a light blue Oxford button-down, plagued with wrinkles indicative of a quintessentially collegiate approach to a domestic responsibility, such as laundry. The young man was alone, accompanied only by a faded denim backpack and an inescapably curious visage—I often caught glimpses of him admiring the chromatic intricacy of the marble tile mosaic running along the courtyard perimeter. We looked about the same age, inasmuch as the red scabs that peppered his chin signaled a Pyrrhic victory against the grooming razor. The sun offered its final rays and the visitors rolled up their maps en route to the exit. He lingered, as if he were expecting someone to enter into frame. If we make eye contact from across the courtyard, then I’ll take that as an invitation to approach him. A breeze rolled in from the laguna and picked up some files stored in a manila folder that he held beneath his arm, scattering them in every direction.

I reached the island of San Giorgio Maggiore this morning without any particular expectations. Time became a beautifully ephemeral concept. I was searching for something that had become frayed over time and was symptomatic of an ill-constructed disposition. I had experienced being alone before, despite having two older brothers who consistently intruded on my personal space. Yet, I struggled with the feeling that this was a different sensation, one that dug deeper and questioned the type of friend, brother, son, and confidant I was to the people around me. In many ways, I was “stuck,” unable to budge from a persona made static by habit. As I looked back across the courtyard, the young man offered an opportunity for me to pick up the pieces of myself, residue washed up in the wake of a complacent adolescence. There was room for self-discovery, and he held the door wide open.

In one swift maneuver, he lifted his head and removed his sunglasses to accept my outstretched hand. He was a university student in nearby Padova visiting Venice for the day. Alone, just like I was. He lived with his parents and had older brothers, just like I did. As he proceeded to damn the wind that had made him lose an important page of reading a few moments earlier, I could only think about all that I had found in him. I wasn’t expecting anything that day but I was, in fact, looking for a great deal. That shift in perspective made all the difference and led me to Nicolo. Meaningful connection? A warm embrace? Perhaps simply a set of ears to receive my words? I couldn’t exactly put my finger on just what I sought, but, in many ways, this came as an unexpected relief. The elusive, intangible sensation I was after would grow over time, eluding definition and the rational workings of my mind.

The conversation continued right up until the security guard began making his rounds about the courtyard, sweeping up the dead, splintered twigs on the marble tiles and shooing away the daily feline visitor. I wondered if there was a part of me left in the guard’s dustpan, sloughed off to expose a new version of myself. It felt as though I was growing into the person I was supposed to be, returning rather than redefining. For all I know, these feelings could have easily been unidirectional—Nicolo might have preferred to remain in his own world rather than let me in, but the farther I explored beyond my ill-constructed radius of comfort, the more exposed I became to the very aspects of life that I had been blind to for so long. It just takes a bit of courage to trust that all is well that ends well. 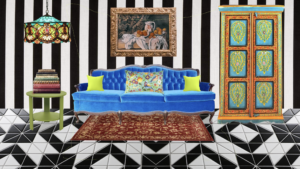