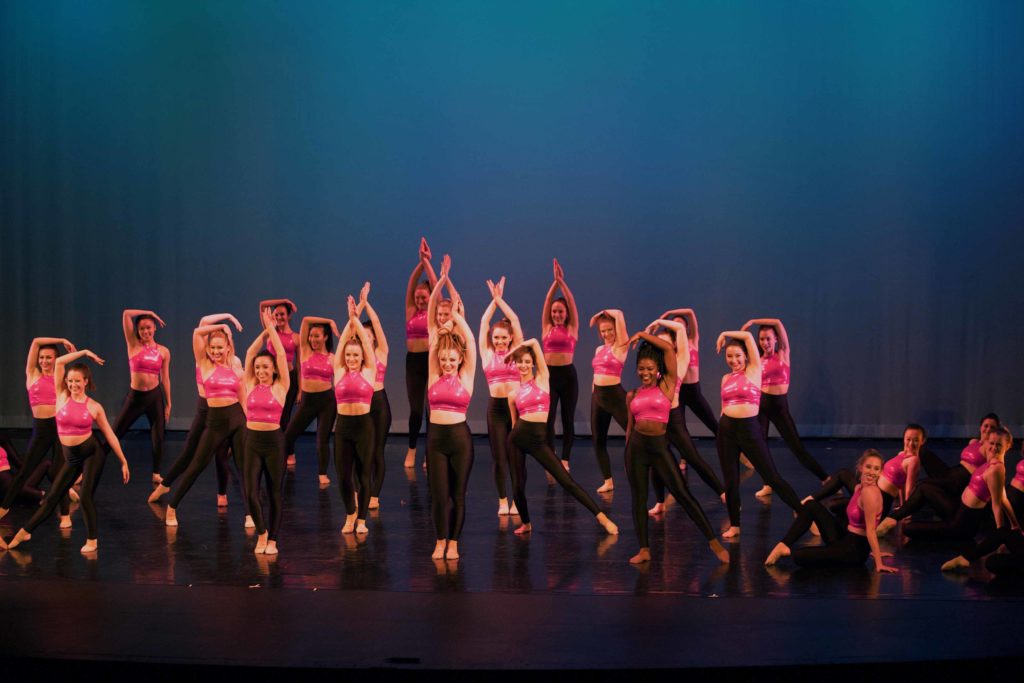 The Dance Organization of Boston College (DOBC) presented Strut from  Feb. 1 to 3, which featured a stunning collection of performances directed by Elizabeth Takash, CSON ʼ18. The unified dance group carried out aesthetically and stylistically varied numbers and conveyed an atmosphere of fearlessness that inspired and entertained viewers.

The show opened to Britney Spears’s iconic “Toxic” and showcased a dazzling assortment of synchronized pirouettes and silhouette sections with choreography by Kristina Major, MCAS ʼ19. The routine was followed up by an effervescent dance to Zara Larson’s “Sexual.” Choreographed by Audrey Ballard, MCAS ʼ19, the groovy beat accentuated a flurry of leaps and blended a playful style with a sophisticated one.

Several numbers brought exciting visual components to well-known pop songs. With EZA’s cover of “Shape of You,” the dancing on the moodier, slower tempo track contrasted swaying walks with frenetic limbs. Choreographed by Alexis Hamill, MCAS ʼ18, the dancers expertly hit the synth beats for a routine that reinterpreted the style of the popular song. The carefree attitude of Icona Pop’s “I Love it” brought a vibrant, lighthearted style of dance. With choreography by Morgan O’Connor, CSOM ʼ18, a series of spotlights showcased individual dancers with compelling solos and unified the stage at the end with an impressive line of dancers.

The group transitioned into a conceptual number with simulated fight sequences to Ruelle’s “Game of Survival.” Choreographed by Arisa Viddayakorn, CSOM ʼ20, the dance reminds people not to let negativity stand in the way of living their best lives. The conflict of the dance was highlighted by half the dancers wearing taupe dresses and half wearing black, one side often physically inhibited by the other. The two sides ran across the stage, throwing mock punches at each other and using strong, insistent movements to carry out the scene.

The crowd erupted in cheers when “Hush Hush, Hush Hush” by the Pussycat Dolls blared over the speakers, and the dancers brought their fiery sides out to bring the dance to life. The brisk pacing and snappy choreography by Amy Feldman, MCAS ʼ19, carried sassy overtones of empowerment. Another thrilling routine was a football-themed tap number, beginning with a set of dancers huddled together to High Frequency Karaoke’s instrumental of “Salute,” which was paired with sequences of a cappella tap rhythms. Choreographed by Madison Choo, CSOM ʼ20, the momentum built throughout the dance, and the even pacing and gliding formations made the routine a crowd favorite. A routine to Imagine Dragon’s “Believer” amped up the audience with its firm, energetic style. Choreographed by Emily Zona, MCAS ʼ19, the routine was filled with tough stomps and spirited arms, with leaps perfectly timed with the accentuated beats of the song.

Sexual Chocolate (SC) appeared for a guest performance and crafted an amusing skit to complement its rhythmic step dancing. One dancer filed onto the stage to inform the audience that he was there to secretly try out for DOBC, and he even had a bright pink “I heart DOBC” muscle tank on to solidify his conviction. When some of his SC friends showed up to run their skilled routines of claps and stomps, the dancers decided to collab with DOBC sometime and perhaps even try ballet or jazz dancing. PATU also appeared with a rhythmic, vibrant African dance number. The full-bodied, bouncy choreography brought an upbeat energy to the stage and contributed a unique, refreshing performance to the evening.

A handful of numbers stood out for their heartfelt, emotional qualities. James Blake’s bittersweet piano notes of “A Case of You” were met with fluid movements and rippling, dynamic choreography by Jill Villeneuve, MCAS ʼ18. A piano ballad to Isak Danielson’s “Ending” featured an evocative dance style, showing dancers run off stage one by one. This created a captivating visual effect and accentuated the melancholy atmosphere of the piece.

Still other dances brought a beautiful tranquility to the stage. Choreographed by Alyssa Rao, MCAS ʼ18, “Until We Get There” by Lucius opened with one dancer posing with mermaid vibes. The contemporary dance brought full body rolls and waves of outstretched movement, and the track’s peaceful acoustic sound highlighted the harmonious performance. The group’s ballet routine to Regina Spektor’s “The Light,” choreographed by Elisabeth Campbell, LSOE ʼ19, demonstrated a lovely attention to lyrical detail. The grace and extension of the dancer’s movements elevated the airy piano track to celestial levels.

For fans of La La Land, the sweet, vintage vibes of “Someone in the Crowd” proved to be an effervescent dance number. Choreographed by Katherine Tague, MCAS ʼ19, the dance displayed a wide circle of jump turns that made for a beautiful coverage of the stage. During the quiet, sparse section of the song, the dancers sprawled on the stage and kicked into the air, and the audience was completely silent in response to the magnetic moment. The finale number, “Strut” featured a medley of firecracker tracks and boatloads of confidence and fist pumps to bring the cohesive show to a close.