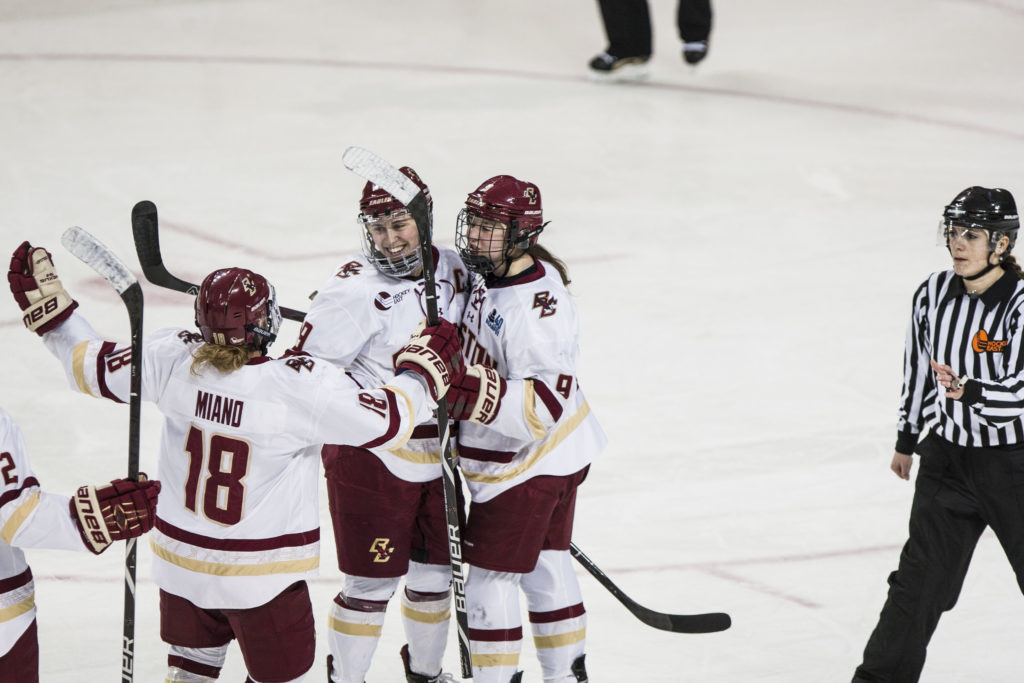 Katie Crowley preaches a familiar message to Boston College women’s hockey: It’s all about the team. What coach doesn’t? But early on in the 2017-18 season, the focus has been on the accomplishments of individuals. With her most recent victory on the road against Providence, Katie Burt became the NCAA’s all-time leader in wins by a goaltender. Caitrin Lonergan has capitalized on her experience from last season by more than doubling her point total, putting her at second-most in the nation. That’d be the story for the Eagles, if they didn’t also have No. 1 Daryl Watts, the freshman from Toronto who has been, wire-to-wire, the nation’s leading goal scorer.

Though it’s nice setting and chasing records, at this point in the season, the Eagles have their sights set on something larger: a clean sweep of Trophy Season. Having those three superstars—and a veteran leader with plenty of Trophy Season experience—makes another run at a to-date unachievable feat for the Eagles a lot easier.

On Tuesday night, the team took that first step. Despite being outshot 38-28, No. 3 BC defeated crosstown rival Northeastern at Kelley Rink in the opening game of the 40th Women’s Beanpot Tournament, 5-2. The Eagles were led by two goals from Watts and a hat trick from team captain Makenna Newkirk, her fourth three-point game in five Beanpot appearances. BC now advances to play Boston University next Tuesday, Feb. 13, at 7:30 p.m., the program’s sixth-consecutive Beanpot Final game.

“We came out with the younger kids on fire in the beginning, and then our older players stepped it up in the end,” Crowley said after the game. “Overall a great team effort, I thought our team played well, and we got ourselves in a final so that’s always something to be really proud of, and we’re giving ourselves a chance to win another trophy.”

The frame began with back-and-forth play by both offenses. The Eagles (25-2-3, 17-1-3 Hockey East) kept some early attempts by the Huskies (13-14-3, 9-10-2) at bay with solid defensive play by Kenzie Kent out in front of Burt. On the other end, Northeastern goaltender Brittany Bugalski handily stopped an early give-and-go by Delaney Belinskas.

But halfway through the period, Watts, Lonergan, and Toni Ann Miano began to show off why the Eagles are the deadliest scoring team in the nation. Miano found a hole, in which Watts got behind the defense. With only Bugalski to beat, Watts put together a couple of nifty moves to get BC on the board first.

After spending two minutes in the box for hooking, Watts and Lonergan put together one of their best goals of the season. On a 4-on-4, Lonergan reeled in the puck from behind, following a shot by Northeastern’s Lauren Kelly. She undressed Kelly along the boards, then skated down the ice alongside Watts with only Codie Cross to beat. Lonergan, a sophomore from Roslindale, Mass., held the puck long enough in front of Bugalski to force Cross to lunge toward her. At the last moment, she passed it to Watts, who sold her forehand and forced Bugalski out of position. Watts tapped it in easily for her 36th goal of the season, extending her nation-leading point total to 71.

“Caitrin made an awesome pass to me, and the goalie kind of—she slid all the way to the left, so it was an easy deke for me to make,” Watts said.

But in the second period, the Eagles came out flat. Throughout the frame, the Huskies forced BC to play on its heels—Northeastern outshot the Eagles, 18-8, which could’ve been even more had it not been for some strong plays by Miano and Grace Bizal to poke the puck away from the crease. Then, the defensive mistakes began to hinder Burt’s ability to see the puck—and it showed on the scoreboard.

The first miscue came four minutes through the frame. Andrea Renner heaved a desperation shot at Burt, likely hoping for a deflection or a centered pass. But Serena Sommerfield deflected it off her stick, which caused Burt to lift up the wrong leg and let the puck trickle through the five hole.

Six minutes later, the Eagles’ defense broke down in front of Burt again. Taytum Clairmont attempted to center a pass to team captain Shelby Herrington. The puck bounced off Ryan Little, but fortunately for the Huskies, it caromed right to Kasidy Anderson. Because Bizal played tight on Clairmont, she missed her assignment to get back on Herrington, who pushed it past Burt for the goal.

What stunted BC even more was that Northeastern shut down Watts and Lonergan. But, from there, Newkirk took over. Newkirk and her fellow captain Kent combined for a give-and-go goal three minutes after Herrington’s equalizer—Kent forced a turnover at the blue line that allowed Newkirk to slot it past Bugalski’s right shoulder to put BC back on top. Northeastern almost got one back in the second, but the review showed Brooke Hobson interfering with Burt, maintaining BC’s lead into the third. Still, Crowley was not pleased with the second-period performance, laughing with Newkirk to allude to the fact that there wasn’t a lot she could say on camera without an FCC warning.

“I thought we withstood the storm in the second period, and I told them that,” Crowley said. “That team over there, they’re a very good team. I know their record doesn’t necessarily show it, but they’re a very good hockey team. And in the third, we wanted to keep it simple.”

They did just that. With five minutes to go in the frame, Kent made an excellent read off the boards behind Bugalski to send a back pass toward Newkirk. The junior from Scottsdale, Ariz. went top shelf and into a celebration after giving BC some much needed insurance. Then, on an empty-net 6-on-4, she got the final goal she’d need to put the Eagles in front comfortably.

“It’s huge for our team, it’s the first trophy of the season,” Newkirk said. “So I think that we’re trying to gear up for UNH on Friday, but it’s easy to get up for Tuesday.”