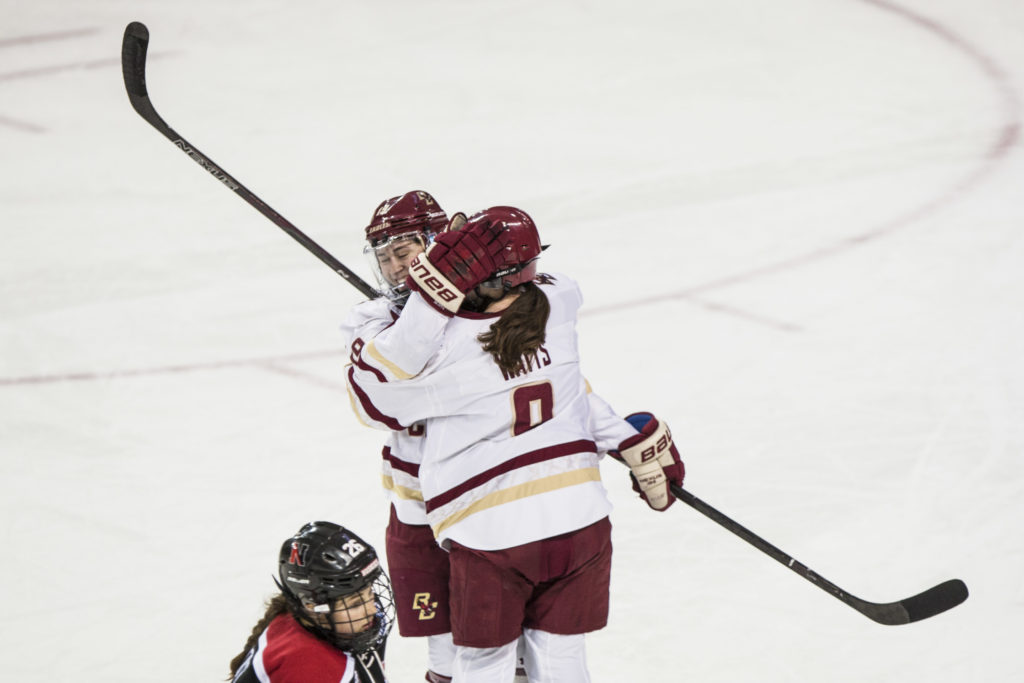 Boston College women’s hockey will attempt to win its third Beanpot trophy in a row after topping Northeastern on Tuesday night. Despite a shaky second period, the Eagles (25-2-3, 17-1-3 Hockey East) pulled themselves together to hold onto a one-goal lead. The third period brought smoother sailing, with BC launching another two shots past NU’s (13-14-3, 9-10-2) Brittany Bugalski, sealing a 5-2 victory.

Watts has notched 71 points in her rookie season, the most in the country. Her closest competitor is teammate Caitrin Lonergan, who’s seven points behind. Watts is on track to break Alex Carpenter’s record for most points in a season at BC, which is 88 in 41 games—and if things go well for the Eagles, there’s a month of hockey left. Her two goals in the first period set the tone for the rest of the game and provided a good cushion for when BC fell into trouble in the second period. She fed off of linemate Lonergan and defenseman Toni Ann Miano, which shows her ability to make things happen, no matter the circumstance. The combination of Watts and Lonergan on the second line also adds a considerable amount of depth to the Eagles’ offense.

Newkirk clinched a hat trick with an empty netter at the end of the third period, extending her point streak during the Beanpot to four games. There have been just three games this season in which Newkirk hasn’t contributed a point. Combined with her co-captain Kenzie Kent and newcomer Maegan Beres, the line worked cohesively throughout the game, building off the play of its defensive corps.

Filling in the large gap left when Megan Keller, Kali Flanagan, and Cayla Barnes joined the United States Olympic Team, Miano, Serena Sommerfield, and Grace Bizal stepped up their play during Tuesday’s game. Sommerfield in particular blocked shots in front of Katie Burt, coming up big when the Eagles started to falter in the first half of the second period.

“I thought we blocked a lot of shots tonight, and that’s not necessarily our forte,” head coach Katie Crowley said. “Our D, they go hard out there for 60 minutes, and I thought overall they did a great job.”

Despite being on its game, the defensive corps was also responsible for the Eagles’ second-period scare. Andrea Renner’s goal only made it past Burt because Sommerfield’s stick clipped at the puck, setting up Renner for the perfect scoring opportunity. It was so jarring that Burt didn’t know where to look, and the puck ended up going five-hole. Later, on the second goal, the puck bounced off Ryan Little’s skate, arriving at Kasidy Anderson’s feet and then passed on to Shelby Herrington. Bizal was also out of position from the initial shot, giving Herrington a chance to whip one of her own on net. In the long run, the defense’s play helped BC out, but the sloppy mistakes in front of the cage made the first-round game a lot closer than it could have been.

Referees are not infallible, which is why we have instant replay. Renner attempted another shot on Burt in the second period, during which a Northeastern player collided with Burt and left her to defend from the ground. What would have been the tying goal was waved off by the referees upon review, leaving the Eagles to hang on to a 3-2 lead.

Yes, it’s a rivalry because all four teams are in the same area. But you are kidding yourself if you think anyone at BC says “sucks to NU.” Northeastern is a worthy opponent—its fans did not hold back from heckling Burt with the Sieve chant. It is, however, a known fact that the real deal is BC versus Boston University, which is exactly what we’re getting in this Beanpot championship. What’s more satisfying—the Eagles winning, or making BU come out to Chestnut Hill and pretending we’re in Boston? You decide.

BC women’s hockey often does not get the benefit of having a band, pep or otherwise. Tuesday’s game featured both the BC and Northeastern pep bands, which led to a pseudo-battle of the bands, in which neither thinks it is really competing against the other but will pull out all the stops just in case. In this circumstance, the advantage goes to NU. Playing classics like “The Time Warp,” “Take on Me” with extra cowbell, and “I’ll Make a Man Out of You,” Northeastern blew BC out of the water. BC’s repertoire included the clapping song from the Despicable Me 3 trailer and zero cowbell. You can’t win ’em all.