Three Boston College football seniors have been invited to participate in the NFL Scouting Combine later this month in Indianapolis, Ind., Boston College Athletics announced Tuesday. The high honor of being selected has boded well for Eagles of the past—just last year, linebacker Matt Milano and safety John Johnson III took part in the televised pre-draft workout and landed spots on the Buffalo Bills and Los Angeles Rams, respectively.

To no surprise, one of the 300-plus players to receive an invitation was star defensive end Harold Landry. Heading into the 2017 season, Landry was given high expectations and a top-10 2018 draft projection, but, while he still received ACC third-team honors, injuries throughout the season prevented him from living up to his first-round grade. This means the combine will be the perfect place for Landry to showcase his skills and prove he is still the player that racked up a nation-leading 16.5 sacks in 2016. One team that will surely be watching him is the Detroit Lions, who recently signed BC defensive line coach Paul Pasqualoni as their new defensive coordinator and have the 20th pick in this year’s draft.

Also invited to the combine are cornerbacks Isaac Yiadom and Kamrin Moore. The two secondary standouts were key factors on an Eagles’ defense that was ranked 12th in interceptions and third in pass efficiency defense this past season. Yiadom has received lots of individual attention throughout senior bowl practices, including Twitter recognition from draft expert Mike Mayock. Moore, meanwhile, was a captain on BC’s defense this past season, but, just like Landry, had his season shortened due to injury. Still, in just 10 games Moore recorded 50 tackles and broke up nine passes.

While Yiadom and Moore may not receive as much of a spotlight as Landry, the Combine is just as important in helping them reach the next level. If both end up being drafted, the pair would be the third and fourth defensive backs taken in the NFL draft from BC since 2016—just two players from that position were selected between 1998-2016. Over that same time span of 20 years, the Eagles have sent 15 offensive linemen to the NFL, but just one in the past eight years, displaying a shift from dominance on the line to superiority in the secondary. 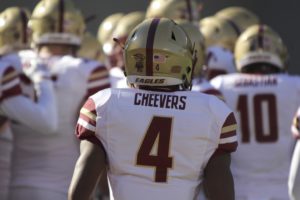