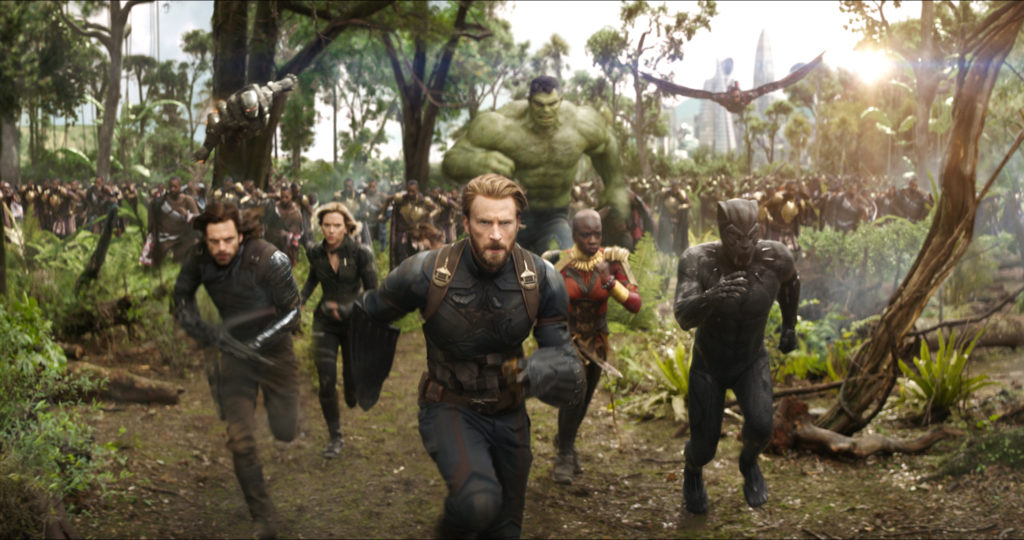 Black Panther is coming out next week, and it looks fantastic. I am extremely confident that the movie is going to be one of Marvel’s best yet, and one of the best movies to come out so far this year. But seeing trailers and advertisements for the first superhero movie of 2018 brought with it the ambivalence (no, not indifference, they are different words with different meanings) that I feel about superhero movies, most especially Avengers: Infinity War.

This movie has gotten a few important trailer spots, and already people are losing their damn minds about it. Yet I cannot bring myself to care in any way other than being annoyed. Today, audiences are assaulted with the same generic garbage superhero movies over and over (there are exceptions of course, but tell me that you liked some of the absolute trash that has been released by any superhero studio in the past couple of years). Marvel and DC share this problem. Most of the movies for each studio have the same trite feel, with the same trite stories and visual effects and tie-ins to a larger universe. It’s tiring. This phenomenon has been going on for a long time too. I challenge you to rewatch The Avengers and tell me the first hour isn’t boring. I challenge all of those misguided supporters of Batman v. Superman or Suicide Squad to watch those movies again. They are terrible. I challenge the die-hard Marvel fans to rewatch Captain America: Civil War or Thor: The Dark World or Iron Man 2 or Iron Man 3 or Avengers: Age of Ultron and tell me they aren’t bored to tears. I challenge people to watch The Amazing Spiderman 2 or X-Men: Apocalypse or Justice League again. These movies are not good. The few bright spots that felt good in theaters are far overshadowed by the glaring sameness of it all. Marvel movies all have the same brightness, the same dumb jokes, the same references to other Marvel movies, the same goddamn Stan Lee cameos. DC movies have the same grittiness, the same grayscale color palette, the same Zack Snyder bullshit.

And there seems to be no end in sight. This year, Avengers: Infinity War and Aquaman are both coming out. I don’t see a way that Avengers is going to be good. There are way too many characters (think of all the “important” characters from every single Marvel movie so far). Remember that “awesome” shot in The Avengers where the camera pans around and it’s all of the heroes standing back-to-back preparing for the fight? Imagine Infinity War’s version of that shot. We’ve got Iron Man, Thor, Captain America, Hulk, Black Widow, Hawkeye, Ant-Man, Spiderman, Falcon, Scarlet Witch, Vision, Doctor Strange, Black Panther, War Machine, Star Lord, Nick Fury, Maria Hill, Gamora, Nebula, Drax, Rocket Raccoon, Groot, Mantis, Wong, Bucky Barnes (Winter Soldier), Loki, Heimdall, Captain Marvel, and probably a few other people who will be expanded on in Black Panther. This pan-around shot would take hours. This is not to mention the millions of other characters that aren’t actual superheroes who have been featured in these 17 movies. What about that doctor that Stellan Skarsgard plays in Thor? What about Korg, the rock guy from Thor: Ragnarok? What about Happy Hogan from Iron Man? How many characters can we actually pay any meaningful attention to in this one movie without making it seven hours long?

There are also no stakes. Everyone and their mother is worshipping at the feet of this movie because the contracts of these actors are up. Gasp! They are finally going to kill someone! Oh boy! Yes, finally. After 17 movies, someone important is finally going to die. All this means is that Marvel gets to pat themselves on the back for having the guts to finally kill off an important character, and all of the fans get to cite the incredible emotional impact this will inevitably have on them in their defense of this ridiculous expanded universe. Sigh. Marvel has lost all emotional credit they might have accrued by refusing to provide any stakes in any previous movie. Death can’t be suddenly introduced here without feeling fake or out of place.

Let me be clear. I want this movie to be good. I want every movie to be good. But I’ve seen enough movies to make a fairly educated guess at a lot of the obstacles this movie has set in front of itself. I’m going to see it, because seeing movies is my only defining character trait. But I miss the excitement that these movies used to provide. I want to be as excited as I was for The Dark Knight or for Deadpool or for The Avengers. Right now, I care about the buildup to this movie about as much as I care about Peter Rabbit.