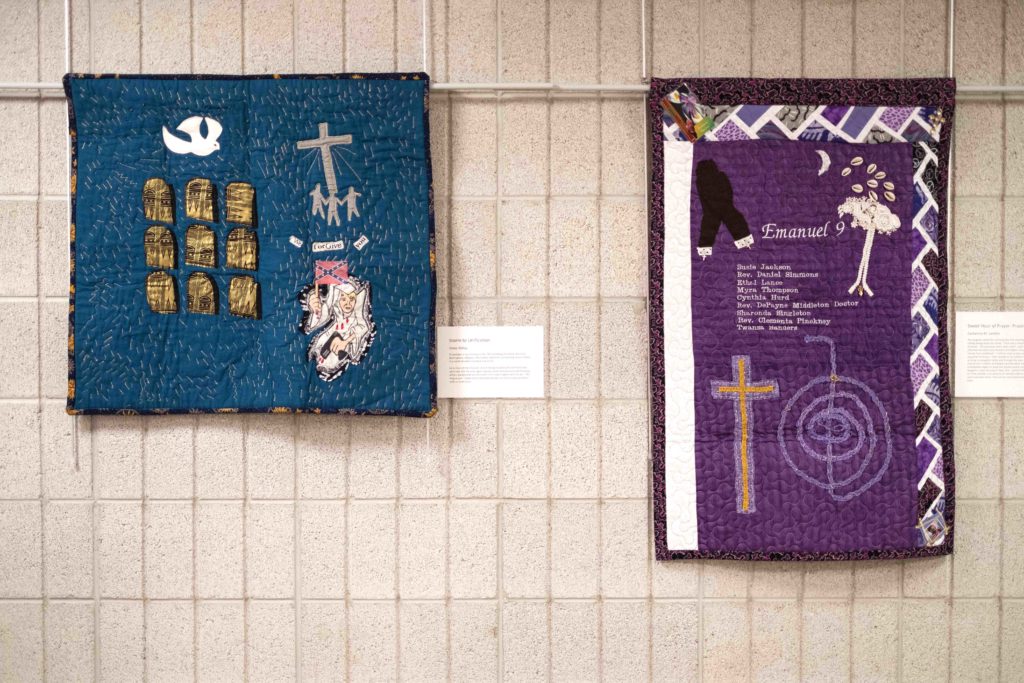 Nestled in the heart of the Theology and Ministry Library on Boston College’s Brighton Campus is a new and profoundly moving exhibit called Holy City: Art of Love, Unity & Resurrection. Anyone who has spent time in the library knows that this gallery is almost cradled by the surrounding walls and stories of gray brick. This situation allows for quiet reflection on the art, uninterrupted by the comings and goings of the upper floors.

Quiet reflection is exactly what is necessary for this highly expressive and emotional exhibit, which is an artistic response to the horrible tragedy of the Charleston church shooting (or the Charleston church massacre). This event was a mass shooting perpetrated by Dylann Roof, a domestic terrorist and white supremacist, in June 2015. Roof had entered Emanuel African Methodist Episcopal Church in time for Bible study and prayer. After participating in the Bible study, Roof pulled out a gun and killed nine members of this historically black church—which has been known as a community organization site for civil rights and a source of faith and strength for the predominantly black community. The victims are usually collectively referred to as “The Emanuel Nine.”

The exhibit was opened on Feb. 8 by Catherine Lamkin, BC ’77, one of the co-curators of the collection, whose work was featured alongside the other 12 pieces hung on the walls of the library. Lamkin was quick to thank everyone gathered around for coming to this exhibit and sharing in this experience of artistic expression with her. She also directed some of the credit to her co-curator, Torreah “Cookie” Washington.

“This is to pay tribute to those killed,” Lamkin said of Holy City.

She then recounted her experience on the day of the massacre. She was in Charleston—the artist grew up in Chelsea, in New York, before coming to BC—watching the news coverage of the massacre when she received a call from her daughter, whose friends in New York had been asking her if her Charleston family were all right. After hanging up the phone to await more information, Lamkin’s daughter called her again. The artist’s voice grew heavy with the memory of her daughter’s words—words that she remembers exactly to this day.

“Mommy, they killed Najee’s grandmother and Gracyn’s mother,” her daughter told her.

Lamkin was also adamant that those present remember and recognize that there were more than nine victims of the massacre. Nine people were murdered, but there were a further three members of the church who hid while the shooting happened and must now live with the trauma for the rest of their lives. There are also the countless friends and family members of the victims, as the affecting tendrils reach far beyond the immediate vicinity of the church. In the wake of this terrible event, she and her friend Torreah Washington, a friend of Rev. Clementa Pinckney, who died in the shooting, began calling for art. The resulting collection became the basis for Holy City.

The artwork itself is mostly composed of ornate and expressive quilts, depicting religious scenes or messages of faithful support in the wake of the shooting. Each work of art is incredibly impactful, and fits well within the rest of the gallery.

Sweet Hour of Prayer: Praying for Peace is Lamkin’s own quilt. The quilt is mostly comprised of a deep purple cloth with gold accents—the colors for Charleston’s Episcopal church, and the colors used to honor the victims at the funeral service. On it, the nine names of the victims are stitched in white thread, while a pair of black hands are clasped in prayer toward the sky.

Grace for Charleston, by Sylvia Hernadez, is a quilt inspired by both the effort to honor the victims and by former President Obama’s rendition of “Amazing Grace” in the wake of this tragedy. Nine patterned triangles extend toward a cross as a dove flies overhead. Along the right side of the quilt are the famous lyrics of the Christian hymn.

Questioning the continued racial backlash against African Americans, especially with regard to police brutality and killings and the criminalization of black youth by society, Jacqueline Johnson created Blessed Are the Peacemakers. African American figures stand united with uplifted arms in front a white church building. These figures stand for peace against violence and as a united front in the wake of the tragedy. Johnson questions the nature of life as a “peacemaker” in the face of a society that begets violence against the black community.

In Your Light Shines Through, Carole Staples has joined nine patterned crosses—each containing the name and a piece of their character (as described by relatives)—in a grid. Behind these crosses is a dark brown stitching. Staples cited the overwhelming sadness and anger that she felt when she heard the news. The wall text to the side of the quilt explains that Staples felt compelled to create this piece to combat the destruction.

“Spirit put it on my heart to make a prayer flag quilt block for each,” Staples writes in the wall text.

Each and every peace sheds a different light on the story, but they are all united by one thing: the role of art as a healing medium. The pouring of emotion into a creative act is cathartic for many of the artists, especially those who were personally affected. The art as a representation and remembrance is also instrumental in healing the community. The families and friends of the victims, along with everyone who felt attacked by this hate crime and others, have another testament to the unity and love these members of the community have for them.

Lamkin herself had a similar and succinct message of creative expression in the face of violence for anyone who comes to see the exhibit.

Walking around the gallery, almost every piece’s accompanying text mentions the intent to heal, to unite, and to strengthen. Each piece does this in a different but equally effective way. This aspect of the gallery is what warrants discussion of so many of the individual works of art. The only way to understand the true outpouring of emotion and support that the exhibit carries with it as it makes its way across the country is to view every piece as individual and as one part of a whole.

Artist Irene Wiley’s Storm to Unification was created in an effort to “reach higher with [Wiley’s] art.” The mostly blue quilt is marked with tiny flecks of thread, signifying pouring rain. A dove flies over nine pieces of golden cloth, representing the victims, while a figure clad in white is sewn to the right. The figure holds a Confederate flag while covered in blood. Above the figure is a cross surrounded by figures with the words “We forGive you.” This piece shows that even in the darkest metaphorical storms, the power of unity and faith allows this community to rise above those who would strike them down in hatred and violence. The text to the side explains that the community must be better than those who would call them enemies, extending forgiveness to those who have sunk so low as to attack them.

The Safest Place is a piece by Evelyn Oliver Knight and is the second work in the exhibit that is based on a royal purple cloth, just like Lamkin’s. The quilt was made for a world filled with doubt and anxiety about the sanctity and safety of the places of God. Knight’s writing explains that acts like these are cause for concern.

“One would think the safest place is a place of worship,” Knight wrote. “The only place of safety is in God, the true refuge in times of trouble.”

Even when places of worship no longer promise safety from hatred and violence, the community that was affected by this injustice can find safety and strength in God.

“A Window To My Father’s House” by Kimberly Love Radcliffe depicts the figure of Jesus raising the Emanuel church above him. This scene is surrounded by the frame of window, which is in turn circled by tumultuous red cloth. The work of art, as described by the artist, is meant to show that even in these dark and violent times, the light of faith shines through and lifts up.

Roof, after his arrest, explained that he murdered these people with the intention of starting a race war against black people. We Are Precious speaks out against this idea. Angele C. Ferguson, the artist, created this piece in order to affirm the idea that the black community is precious, and that the black community matters, just like everyone else. She takes this feeling of love and intention from her faith.

“This quilt represents the face that we are all precious,” Ferguson wrote. “We were all created and loved by the greatest creator of all.”

The quilt itself is made of a mottled green fabric, with large letters restating the title. Above is a recreation of Earth, surrounded by four doves carrying olive branches—one black, one red, one yellow, and one white.

When Aisha Lumumba heard of the Emanuel church massacre, she was so saddened by the idea of people in prayer being gunned down she thought that the angels must be crying. Inspired to share this feeling, she created And The Angels Cried. The quilt depicts three black angels, heads bowed in sadness, sitting together. Tiny tears are stitched, pouring down their faces.

By no means is this article a complete explanation and showcase of all the pieces shown in the exhibit. The true experience and appreciation for this art must be found in person, on the first floor of the Theology and Ministry Library. Words cannot do the whole of this gallery justice. The beauty of art that is rooted in a vile and disgusting act by one person against so many innocent victims is striking. Yet, there is great beauty here, along with strength, affirmation, unity, and love. The Holy City is, in the truest sense, a whole greater than the sum of its parts.