Home » Go Figure: What Will it Take for BC to Make The Dance? 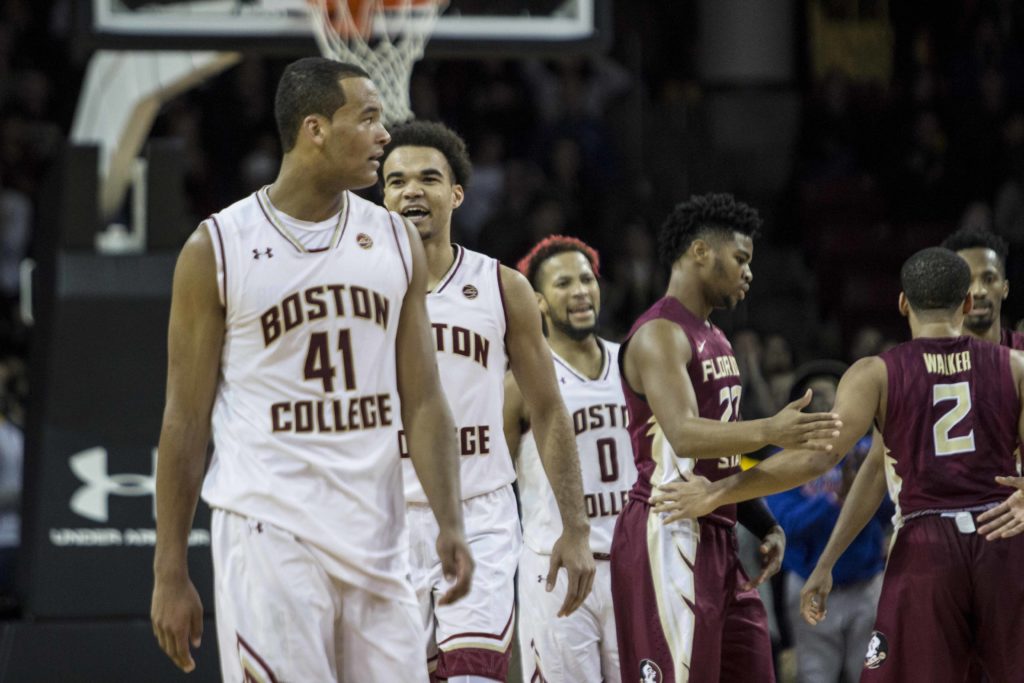 Go Figure: What Will it Take for BC to Make The Dance?

It’s been nine long years since Boston College men’s basketball made it to the NCAA tournament, suffering below .500 records in seven of them. Simply put, the brutal ACC schedule has knocked the Eagles back, time and time again. This year, though, they’re fighting back. With six games left in the regular season, BC (15-10, 5-7 ACC) has a chance—albeit a slim one—of making it back to the dance.

First, let’s look at the history. With six games left and a 5-7 conference record, the best case scenario for the Eagles is likely a 9-9 record. That’s a tough but feasible proposition, with four of the six games remaining on the road. Seeing as the ACC is consistently sending upward of seven representatives to the postseason, an even record in conference play could be enough to attract the attention of the selection committee. In fact, four teams from the ACC have posted the 9-9 mark en route to an appearance in March.

Still, getting to .500 won’t be an easy task. As mentioned above, the Eagles are playing four of their remaining six games on the road, a place that has been practically unwinnable the last few years. Entering Tuesday night’s matchup against Pittsburgh, BC has lost 23-straight conference road games. That’s a startling statistic, especially given the importance of quality road wins in the eyes of the selection committee.

The Eagles will have a chance to pick up a few quality road wins down the stretch, as they’re facing an uphill climb. Per KenPom, five of the remaining six teams are among the top 60 teams in the country, which basically means they’re tournament-caliber opponents.

Granted, some of KenPom’s numbers seem rather low. The Eagles have beaten both Miami and Florida State this season, but are heavy underdogs in each of the road matchups. This is in part due to how well both teams protect their home court, as the Hurricanes are 9-1 while the Seminoles are 10-2. Given how poorly BC has played on the road in recent memory, it’s not hard to predict those as losses.

If it’s assumed that the Eagles are going to lose both of those, they suddenly need to win the remaining four games to have a chance. Conte Forum has been incredibly friendly to BC, so it’s not a stretch to project big games against Notre Dame and Syracuse in which the Eagles even out the season series. Sure, the Irish and Orange won by 11 and 18, respectively, but it’s hard to bet against an Eagles team that has now beaten No. 1 Duke and No. 25 Miami on its home floor on its way to a 13-2 record in Chestnut Hill.

This leaves North Carolina State and Pittsburgh, both road games. The latter is a likely easy win, as the Panthers have limped to 13-consecutive ACC losses. The Wolfpack is a different matter, though. An equally impressive 13-3 at home, N.C. State also boasts upset wins over Duke and Clemson. It’d require an inspired performance on the road—something BC has struggled with, but still has the talent and potential to pull off.

So, a best-case scenario has it winning two of four on the road, and claiming wins in its last two home games.

Will that be enough? Probably not, especially with a lack of big road wins. Let’s keep going.

That forecasts a 19-12 record, and 9-9 in the ACC. Last season, that record would’ve been good for 10th in the league, which means a conference tournament matchup against the No. 15 team—probably be Wake Forest. BC already has a win over them, so a second round game against the No. 7 team is likely. We’re so far gone in hypotheticals that this post could be rendered moot in just a few days, but it’s fun to experiment.

The seventh-seed is Virginia Tech, say. The Eagles went to overtime with them just a few weeks ago, so it could go either way. A win puts them into the quarterfinals against the second seed, which will likely be Duke. It seems incredibly unlikely that BC could knock off the Blue Devils again, but even with a loss, they’re practically in.

Two neutral site wins and a likely close loss to Duke would be more than enough. After all, both Wake Forest and Pittsburgh finished with similar records and only won one game in the conference tournament to make it in.

What does all this mean? BC has to solve its road woes, quickly, to have any chance at earning one of the 68 coveted spots. The tournament means so much for programs, especially ones on the rise. The addition of highly-touted recruit Jairus Hamilton is a sign that Ky Bowman and Jerome Robinson are elevating the Eagles’ status, but closing out the season on an impressive run would take BC to the next level. Still, if the Eagles struggle down the stretch, all is far from lost. The 2017-18 season been a remarkable campaign that has the campus buzzing, and that’s ultimately a tremendous first step in the team’s development.