Home » Losing the Thrill of Going Out 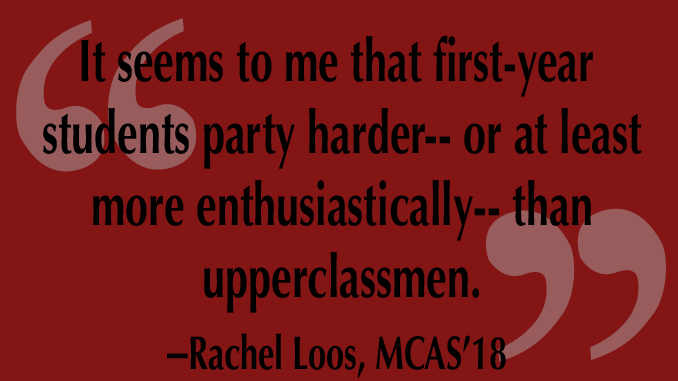 Losing the Thrill of Going Out

When I was a freshman, I used to go to parties every chance that I could. Just like in high school, I got this nasty feeling that I was missing out whenever I knew other people were having fun without me. Being away from my parents was new and refreshing! I had no curfew and few rules to follow. I didn’t go crazy, but I definitely took advantage of my newfound freedom.

It seems that first-year students, because they tend to have less experience with alcohol, don’t really know their limits. Personally, I never drank to the point of needing medical assistance, but I remember the ambulances, tasked with transporting intoxicated freshmen to St. Elizabeth’s, parked outside of freshman dorms almost every night during Welcome Week and the first few months of school.

One reason for this could be that us juniors and seniors don’t socialize in the same ways that we used to. Back on Upper Campus I was stuffed in a dorm with communal bathrooms, forced to interact with people all the time, whether I wanted to or not. It may also be that freshmen are more desperate to make friends and prove themselves. Coming from high school, they may feel more pressure to study and find that perfect clique of friends.

Lately for me, going out feels less fun than it used to be, and I have been having a harder time finding enjoyment in the things I used to like. This wasn’t always the case. When I was a freshman, I would get excited just to get dressed up—I didn’t really care where I went. I almost always had a good time, even though I probably just wandered around campus trying to get into parties before giving up and getting late night in Mac.

Now I think I have gotten tired of following the same routine every weekend. Instead of getting excited, I tend to see it as a chore. Lately, as my time left at Boston College gets shorter and shorter, I find it more rewarding to hang out with small groups of people that I really like rather than a group of 200 people I barely know.

I was thinking about this the other weekend when my Mod hosted a party. I was hoping I would be able to feel that excitement again, but I ended up just feeling old and jaded. Most of the underclassmen who attended ended up staying for a really long time. They knocked back tons of shots and danced their little butts off! I felt like their mother. I spent a lot of the time just cleaning up after people, and I felt upset with myself that I couldn’t seem to relax and enjoy the party.

I noticed that any seniors who showed up only stayed for a few minutes before leaving to go out to bars, which I think is overrated. I can barely afford the Uber ride there and back, much less the expensive drinks I have once I’ve waited through the mile-long line in the freezing cold. I don’t think I have always felt this way: When I first turned 21, I was happy to spend my time and money drinking at bars. I have heard some other BC students complain that the bars in Boston close so early, but I honestly find it a relief. I don’t understand how some people can stay out until 4 a.m. I tend to get tired pretty early and have a hard time recovering the next day.

Every once in a while I get excited to go out again, except now it’s usually for concerts or comedy shows. I have always loved attending these kinds of events. In fact, I recently got tickets to the shows of two musicians that I saw my freshman year. It seems like a nice way to end my time in college, and hopefully I can recapture that feeling of enthusiasm again.