Home » BC Hindered by Turnovers, Lack of Paint Presence in 34-Point Loss 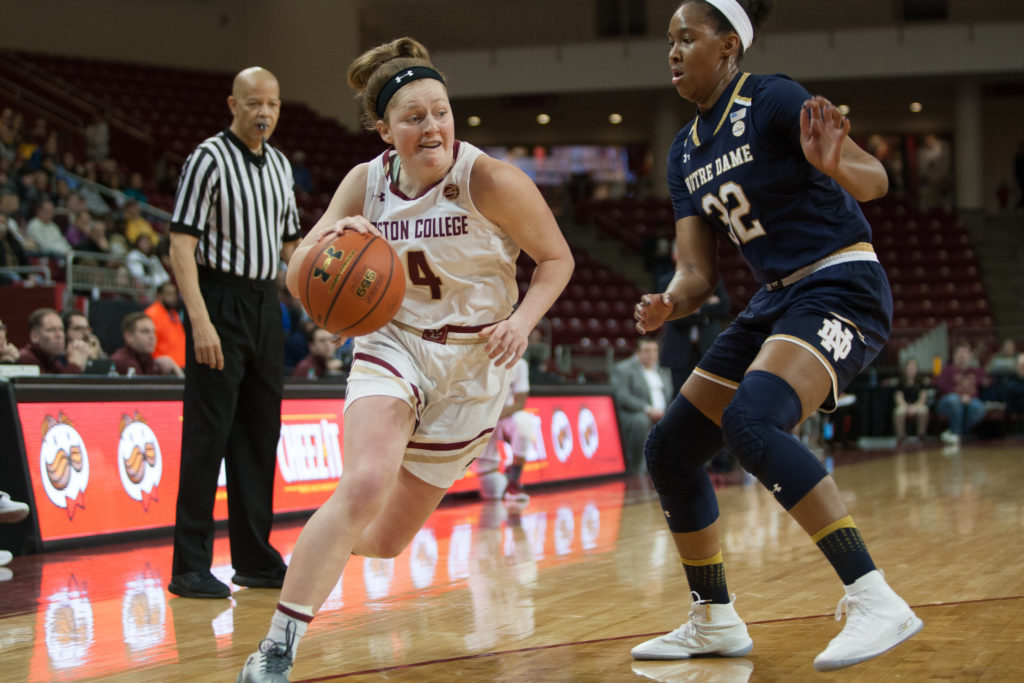 BC Hindered by Turnovers, Lack of Paint Presence in 34-Point Loss

A few days removed from a 35-point blowout loss to No. 4 Louisville, Boston College women’s basketball didn’t get much of a respite. The Eagles welcomed No. 5 Notre Dame to Conte Forum and, despite hanging with them through the halftime break, the end result was as predicted.

“Their points in the paint numbers are unbelievable,” Eagles head coach Erik Johnson said. “They used their size advantage really, really well. We did everything we could to mitigate that but Notre Dame had answers every time we had an answer.”

Notre Dame needed just one 3-pointer to pile up almost 90 points, the product of a decisive size advantage. The Irish also capitalized on 15 BC turnovers, scoring 26 points off of them.

The Eagles took the court energized and ready to send their seniors, playing their last game at Conte Forum, out with a bang. For a large chunk of the first quarter, the teams were exchanging consecutive baskets. With no fouls or timeouts called until three minutes left in the first quarter, the pace of the game was extremely fast.

The Eagles were moving the ball around beautifully, but when it came to the actual scoring, it was a completely different story. While both BC and the Irish were finding ways to the basket, only Notre Dame was able to convert, while the Eagles struggled to finish.

Notre Dame went on a 10-0 run after about six minutes of play by slicing through BC’s defense. After a few solid layups early on from senior Katie Quandt, BC had lots of trouble with their 3-point shooting, missing five triples in the quarter.

With the Eagles struggling from beyond the arc, Taylor Ortlepp came up big and drained two 3-pointers to close out the first quarter, cutting the Irish lead to seven.

The momentum carried over into the second quarter for the Eagles. Ortlepp kept her team alive with her perimeter shooting, reaching 17 points by halftime while tying her own personal record for most 3-pointers in a game. The outside shooting kept BC in it, even as the Eagles were drastically outscored inside. Still, despite the fact that BC was overmatched down low, the Eagles were only outscored by two in the quarter.

BC still had some serious work to do. Entering the third quarter down nine, the Eagles brought the hustle. Even though they continued to go to work, their shots were simply not falling. Meanwhile, Notre Dame easily cut through the lane on the other end for easy buckets. The Irish opened the half on a 13-1 run and didn’t look back.

During the last four minutes of the third quarter, the Eagles didn’t make a single field goal. The crowd was growing silent and any momentum seemed fleeting, but when Milan Bolden-Morris hit a shot from downtown with less than three minutes left to go in the third, Conte Forum showed some signs of life. Just 20 seconds later, Taylor Ortlepp drained another triple, and a timeout was taken. BC scored six points within a 20-second span, giving the Eagles some much needed confidence heading into the fourth. Still, the Eagles trailed by 19, and they weren’t able to get much closer.

At the start of every quarter, the Irish came out strong and scored quick buckets. The same was true of the final frame: Notre Dame came out and plowed through BC’s defense for an easy two points. The Eagles were having trouble keeping up with the Irish, and it seemed like no matter what they did, Notre Dame had an answer. The Eagles could not put a stop to the Irish’s scoring, and Notre Dame pulled away for BC’s second-straight 30-plus point loss.

Although the game was a tough way to send out the seniors, it was not all negative for the Eagles. Fourth-year player Katie Quandt had a very solid game, putting up seven points and nine rebounds, the latter being a new career high.

Despite the margin on the scoreboard, Johnson came away pleased with his teams effort, a reversal in his eyes of the loss to the Cardinals earlier in the week.

“My guess is that when I watch this game tape tonight I’ll see a lot more consistency of effort,” he said. “I thought when Louisville came back on us, our effort waned in the second half. I thought our effort and our toughness shined through in a lot of places today.”