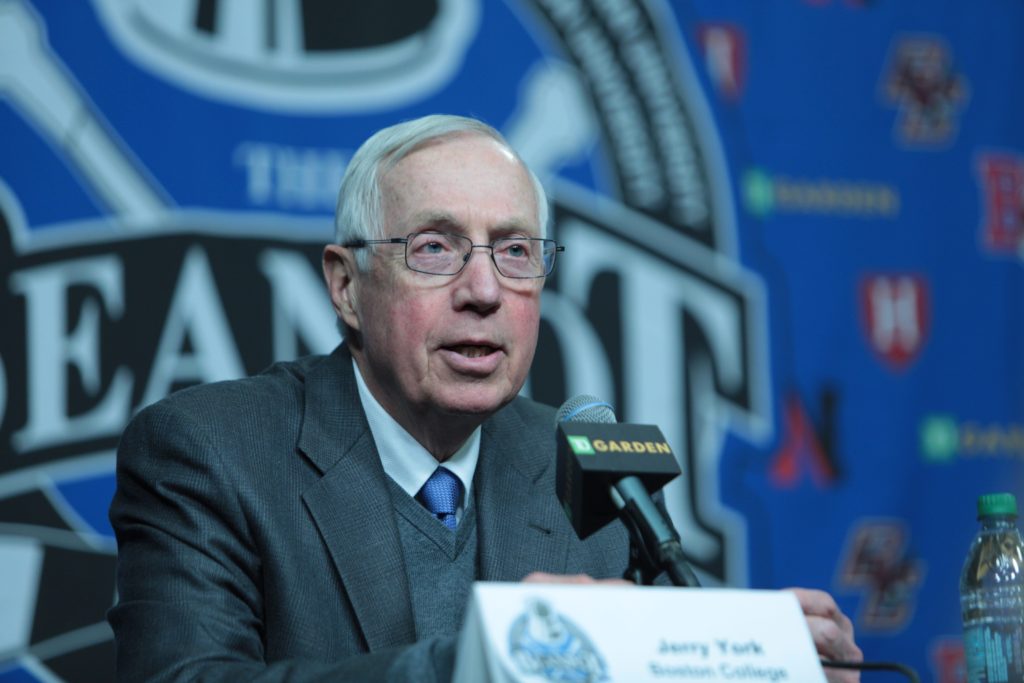 Eagles’ Youth Finally Catching up to Them in Jerry York Era

With its win against Maine Saturday night, Boston College men’s hockey clinched its 16th-consecutive season with a winning record, a streak that dates back to 2001-02. The Eagles may be well on their way to another Hockey East championship, but it sure doesn’t feel like it.

BC has failed to exceed expectations this season by any measure. Ranked No. 13 by USCHO at the start of the season, the Eagles now sit at No. 19 in the nation. The 18 teams seeded above them have a combined record of 7-2-1 against them, proving that BC simply can’t compete against the cream of the crop in college hockey in the same way it has been able to in years past. The Eagles’ current winning percentage of .547 is their worst since the 2002 season, and while they had been able to make the NCAA tournament seven-straight years from 2010-16, it appears their youth is catching up to them.

Despite its top spot in the Hockey East standings, BC stands out for lacking a true goal scorer compared to its competition—a statistic that strongly indicates a team’s prestige. Four other conference teams have at least one player with 15 goals or more. Leading the charge is Beantown rival Northeastern—a group that embarrassed the Eagles at TD Garden earlier this month—whose star forwards, senior Adam Gaudette and junior Nolan Stevens, each have 20-plus goals. BC’s top scorer is sophomore Graham McPhee, who has only 12 on the year.

As far as experience is concerned, the team’s top-five goal scorers have all played less than two years with head coach Jerry York. This is mostly due to the fact that BC simply doesn’t have many upperclassmen. The Eagles’ roster includes four juniors, no seniors, and just one graduate transfer—defenseman Kevin Lohan, who leads his squad in plus/minus this season. But a single 24-year-old doesn’t make up for the past stars that have left the program for the NHL. While 26 other teams have an average age of over 22 years, BC has just five other players at least that old.

Compare BC to a team like Massachusetts Lowell—the oldest team in Hockey East with an average age of 22 years and three months. The Riverhawks have had a combined record of 4-2 against the Eagles over the past two seasons, playing a total of 12 juniors and seniors in that time. Not the most talented team in Hockey East, UMass Lowell’s ability to find ways to win conference games stems from its experience with one another on the ice and, quite frankly, brute physicality.

The biggest reason why the Eagles have failed to find a long-term leader over the past two years is that as soon as a player is good enough to be the star of the show, they leave the team altogether. Obviously, the cost of being able to recruit top players is that they may only play for the team for a short time, but the past two seasons, Jerry York has had more trouble translating potential into wins than he’s had in more than a decade. Had certain players refrained from jumping to the pros, BC’s roster would be studded with star upperclassmen this year.

Colin White, a rookie center on the Ottawa Senators, scored his first two career NHL goals this month, and it’s not hard to believe that he would have had an immense impact on the team had he chosen to stay at BC for his junior season.

Miles Wood, a third-line winger for the New Jersey Devils, is another former Eagle that left the team early. Wood now has 26 points for his team this year, a season that included a hat-trick performance last November. Alex Tuch is another would-be senior that would have made waves in the NCAA, but is now a fourth-round pick turned double-digit goal scorer for the Vegas Golden Knights. Wood and Tuch recorded a combined 69 points for BC two years ago, and both would hypothetically join White on a formidable first line for BC that would compete against Gaudette, Stevens, and Dylan Sikura as the best forward combination in college hockey.

Also not to be forgotten is Zach Sanford, now a winger for the St. Louis Blues. Just like Wood and Tuch, Sanford left BC after the 2015-16 season, and although injuries have stalled his professional career, Sanford had five points in his first five games for his NHL club.

Not all of these players could have been expected to stay all four years after committing to BC, but having just one of them back on the team for 2017-18 could have dramatically changed the story for the Eagles, who are now desperate for veteran experience.

BC’s limited experience as a cohesive unit has resulted in a number of deficiencies the past two years, especially on special teams. One area the team usually dominates is power play success rate, but this year, BC have converted on less than 18 percent of its chances—the third-worst rank in the conference. Even worse has been their performance on the penalty kill. The Eagles have stopped just under 20 percent of opponent’s power-play attempts, and have not had a worse kill rate this century. The team’s failure to communicate with one another has been apparent in this regard, and its lack of group familiarity is to blame.

An even more obvious shortcoming for BC has been its struggles on neutral ice. BC has failed on the biggest stages—specifically in TD Garden during the Beanpot this past month, as well as in the Ice Vegas Invitational back in January. The Eagles, one of the youngest teams in the country, couldn’t rely on talent alone to defeat either Northern Michigan or Michigan Tech in Las Vegas, two of the oldest teams in the country. Two clubs BC has traditionally beaten with its speed and skill ended up providing the Eagles with a mid-season speed bump in the road.

Due to its historic success, BC, like many of the sport’s iconic programs, is one of college hockey’s closest models to your typical one-and-done NCAA team, but of late its prestige has done more harm than good. It’s become clear this year, in particular, that the Eagles haven’t been able to get away with being one of the youngest teams in college hockey. Going forward, it will be imperative for York to hold on to some of his biggest names. Captain Casey Fitzgerald, David Cotton, Graham McPhee, Christopher Brown, J.D. Dudek, Joseph Woll, and even freshmen Aapeli Räsänen and Michael Karow have previously been selected in the NHL draft, and if they decide to forego any of their remaining years—barring an influx of superstar talent—the Eagles could be in trouble again next year.