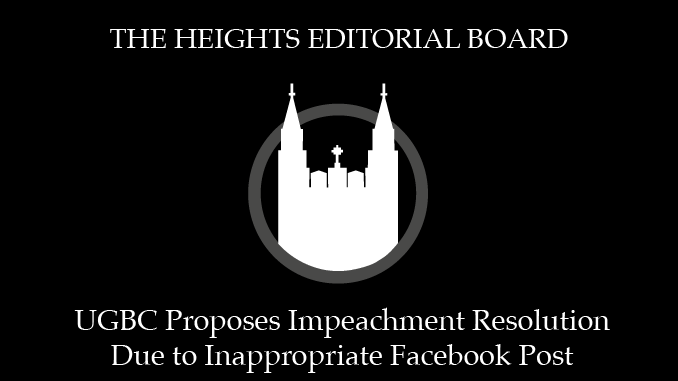 On Friday, Feb. 16, Stephen DiPietro, a former UGBC Senator and MCAS ’19, posted a link on Facebook to a Heights article detailing the results of this year’s Undergraduate Government of Boston College (UGBC) presidential election with the caption, “Good thing those blm freaks aren’t anywhere near ugbc leadership #staywoke #yacoubian,” in reference to supporters of Taraun Frontis, CSOM ’19, and Aneeb Sheikh, MCAS ’20. He later deleted the post.

In response, some members of the Student Assembly proposed an impeachment trial for DiPietro, with Sheikh emailing a resolution to impeach DiPietro to the SA on Saturday. DiPietro and Matt Batsinelas, CSOM ’19, resigned from the SA on Saturday amid talk of impeachment. Batsinelas resigned due to his belief that “UGBC and The Heights [are] encouraging the harassment of students who threaten the current structure of UGBC.”

The impeachment resolution justified holding a trial for DiPietro on charges of harassment and discrimination as defined in BC’s Code of Conduct and the infringement of his oath to uphold the UGBC Constitution. It explained that the post threatened the “emotional or mental well-being” of the students whom it affected. The resolution read, “Not only has DiPietro failed to represent the many students who supported Frontis and Sheikh by calling them ‘freaks,’ he has discriminated against them on a racial level, as the Black Lives Matter movement is inherently a racial issue. Therefore, he has violated his oath of office and the UGBC Constitution itself.”

“The phrase ‘blm freaks’ explicitly refers to the Black Lives Matter movement and is clearly directed at Taraun Frontis and Aneeb Sheikh, their campaign team, many of their supporters, and Black students in general,” the resolution stated. DiPietro disputes that the phrase was directed at Frontis and Sheikh, saying it referred to some of their supporters, who are unspecified.

DiPietro acted inappropriately and rashly. As a senator in UGBC who represents fellow students, his position demands conscientious awareness of his actions. In accepting this role, he acknowledged a responsibility to conduct himself properly and to recognize the consequences of his actions, including on social media. While his post demanded a swift response from UGBC—which it did with a statement posted Friday on Facebook—the charges in the impeachment resolution are somewhat overblown. Although he insulted Frontis and Sheikh, and supporters of the Black Lives Matter movement, DiPietro voiced no concrete, targeted threats, and did not overtly discriminate against any individual based on race. He said something offensive and imprudent about a race-based movement in general, and about the broad group of students that supported Frontis and Sheikh. But according to the UGBC Constitution, “no individual shall be discriminated against or organization denied recognition by the UGBC based upon race, color, religion, sex, sexual orientation, gender expression, gender identity, national origin or citizenship status, age, disability or veteran status [emphasis added].” This is an important distinction.

DiPietro’s comments were offensive and unbecoming of his elected position. He should have faced consequences for the manner in which he communicated his position—had he not resigned, perhaps the SA could have formally censured DiPietro, although based on the UGBC Constitution, it’s unclear if that procedure exists. That said, DiPietro should not have faced possible impeachment and removal merely for his stance—one with which we disagree—on supporters of the Black Lives Matter movement and of Frontis and Sheikh’s campaign. The proposed resolution was an overreaction to DiPietro’s post. While DiPietro should have found a more constructive and civil way of communicating his point, diversity of opinion is a very important facet of a deliberative body with symbolic power among the undergraduate population. In previous years, some have accused UGBC of inadequately representing all students on campus, saying that there is little variation among the opinions of its members. This proposed resolution continues to reinforce that perception.