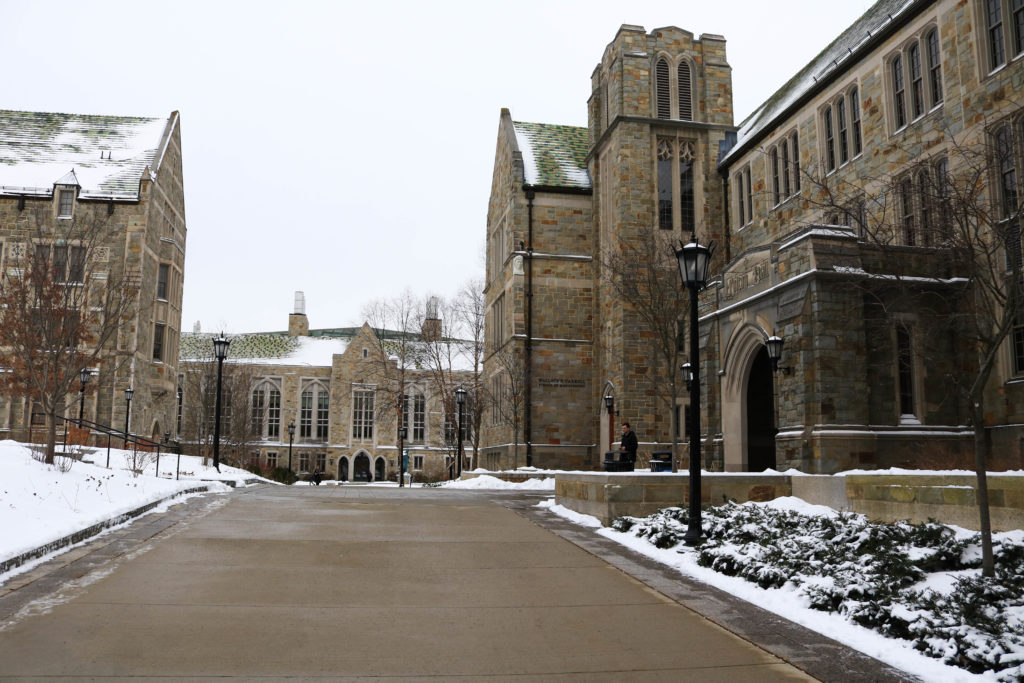 Vice President for Human Resources David Trainor issued a letter Tuesday to the Boston College community announcing that the BC Graduate Employees Union — United Auto Workers (UAW) had on Feb. 6 rescinded its petition to the National Labor Relations Board (NLRB), with the intention of continuing to ask the University to voluntarily bargain with the union.

By rescinding its petition with the NLRB, the union ended legal proceedings with the organization, which could have compelled the University’s recognition of the union.

The group took issue with these two sentences that could be, and by some have been, misconstrued to mean that the union has ceased its organization efforts altogether.

“I found the letter very misleading in a lot of ways, because we pulled our petition from the NLRB, and we continued doing office visits, [and] we continued asking administrators to come to the bargaining table even after we had pulled the petition,” said Bryn Spielvogel, a union member and LGSOE ’20.

Peter Berard, GMCAS ’18, said he was frustrated with the administration’s characterization of the union’s relationship with the UAW. The UAW acts as a larger union organization with the ability to represent graduate students’ rights. It serves as an advisory organization to the union rather than its driving force. Berard thinks the union should be identified identified as a group of BC graduate student employees, not as union members being directed by the UAW.

“We Boston College graduate workers got together, talked about the problems we faced and the hopes that we had for organizing and for making a better university, and we reached out to the UAW,” Berard said. “Frankly to the extent that I’ve interacted with the UAW, the UAW hasn’t lied to me, [and] they haven’t patronized me in the way the Boston College administration has occasionally done.”

The union hopes to make it clear that the end goal for the group hasn’t changed, regardless of its rescinding the NLRB petition. This was made clear in an email that the union sent to its members before Trainor released his most recent letter, alerting them of the end of the petition and the continuation of its efforts to gain voluntary recognition on campus.

“Our goals have remained the same,” said Tori Gabriele, a second-year physics Ph.D. student. “This is one step in the greater goal of sitting down with Boston College to negotiate a contract.”

Berard outlined general guidelines the union will be following: engaging in outreach to the community, establishing improved communication networks among different workers within departments.

In terms of how this letter dampened the union’s efforts, Spielvogel doesn’t believe the statement will have a negative impact on the union.

“It definitely doesn’t feel like that huge of a setback, since it doesn’t affect that much of our everyday workings,” she said. “We were going to have to mobilize to get BC to the table with or without the NLRB, [so] now we’re asking for voluntary recognition, and we already, for all intents and purposes, proved that we have a majority of graduate students’ support.”

Gabriele cited that the union should look to the successes of other private university graduate student unions to advise its own efforts.

“I’m really impressed with the other Jesuit universities, in particular the stance Georgetown has taken to agree to negotiate if they vote yes, and also Fordham,” Gabriele said. “I wish BC would take that stance.”

On the same day BC’s union rescinded its NLRB petition, the graduate unions at Yale University and the University of Chicago also rescinded their petitions with the NLRB. At this time, Yale’s union has not responded to a request for comment or provided updates on its current status on social media.

UChicago’s graduate employees union, on the other hand, is in a similar situation to BC’s union. The major difference between the two is the reason behind rescinding the petition. UChicago union member Daniela Palmer explained that the union believes that it is close enough to getting a meeting with the administration that it can continue on its path to recognition without the NLRB petition.

“We had to have a big, open conversation about everything we’ve been doing and what the next step should be,” Palmer said.

UChicago’s graduate student union is farther along the process of organizing than BC’s is. The group has drawn up governing articles and is preparing to elect officers to comb through survey responses. Although BC’s graduate union has indicated in the past that it was preparing to hold bargaining committee elections, the date for that occurrence has never been publicly released, and the group is still asking for more bargaining surveys to work from.

“We decided that the clearest and most direct path to recognition is really to seek recognitions here, now, on campus,” Palmer said. “We’re ready to negotiate and we expect [UChicago’s administration] to meet with us at the bargaining table.”

UChicago’s union also expressed this sentiment in a blog post on its website, which goes into detail about which factors affected the decision to search for voluntary recognition, rather than let the NLRB deliberate on its fate.

Between UChicago’s and Georgetown’s efforts, the BC union has immediate evidence of universities coming to the bargaining table. Gabriele also cited the past union battles at New York University as evidence that BC’s union should be recognized.

Each union tends to share general goals—like improved health care benefits and better stipends to offset cost of living—even though their individual situations and policy issues can differ.

Columbia University’s graduate union actions stand out from the rest. The union won a court decision in 2016 that has served as a precedent for NLRB petitions for various graduate employee unions across the country.

Now, Columbia’s union is one of the few willing to risk an NLRB ruling, as the university has chosen to continue its appeal of the original decision. The Columbia graduate students’ response has been to call for a strike vote—the only union that appears to have even begun to talk about such drastic action. BC’s union has indicated its support of both of its counterparts in New York, even though it is taking much smaller and less combative steps to bargain.

“The main thing is getting out to people, and saying, ‘No, the union effort continues. We are going to organize. We are going to put pressure on the Boston College administration until they come to the table with us. You don’t need the NLRB to make a union—that has been done at other universities and I think we can do it,’” Berard said.

“Basically, it’s telling people the administration isn’t telling the truth on this. They don’t get to decide, and neither does the NLRB, whether the union effort goes forward. We decide.”