For the 27th time, Boston College baseball players got an opportunity to play a team at a level that they’re all seeking to one day reach—the Boston Red Sox.

And for the 27th time, the Eagles lost, falling 4-2 despite a late rally. But they couldn’t have been happier.

“Honestly, we’re just so grateful to get to play the Red Sox,” outfielder Dante Balldelli told BCEagles.com, after recording one of BC’s three hits on the day. “To get a taste of what’s it like to play is awesome. We all have a good time.”

“It’s a cool feeling,” Scott Braren, who scored a run, added. “Not everyone gets a chance to play a professional team.”

The Eagles trailed, 4-0, entering the final frame, but rallied against Red Sox reliever Kevin McAvoy. McAvoy hit Reyce Curnane and walked Braren, then conceded an RBI groundout to Jake Goodreau. Braren would then come around to score from third after former Eagle Nick Sciortino’s throw to second on a steal attempt skirted into the outfield. The rally was short lived, though, as McAvoy responded to strike out the game’s last two batters.

Sciortino, a 17th-round draft pick by the Red Sox out of BC in 2016, caught the final three innings. He went 0-for-1, but was a welcome sight for Braren and BC.

“Scores was one of my best friends from sophomore year on,” Braren said. “Seeing him out here in a big league uniform was pretty cool.”

After scoring 15 runs in the first three innings against Northeastern in the day’s first matchup, the Red Sox stuck to the same script, building an early 2-0 lead in the first. Eagles starter Jack Nelson struggled with his control early, walking the first two batters in Rusney Castillo and Sandy Leon. Sam Travis doubled in a run, and Esteban Quiroz added an RBI groundout.

William Hesslink, a freshman southpaw, hurled a scoreless inning. In what was his collegiate debut, Michael Marzonie threw a pair of innings, one scoreless, before a two-run Red Sox frame. The Eagles were unable to complete a 5-6-3 double play in the fourth, bringing across a pair of Red Sox runs on the play.

Braren doubled and Chris Galland had a hit to round out the Eagles’ offensive production. The back end of the BC pitching staff was arguably the most impressive. Freshman Jack Hodgson threw a scoreless inning with a strikeout, while Matt Gill worked around two hits and struck out two.

The tune-up was an opportunity for Eagles players to get a feel of the sport’s biggest stage, and seeing someone like Sciortino there should remind fans and players alike—BC has talented players that are taking cracks at the “Big Show” year in and year out. 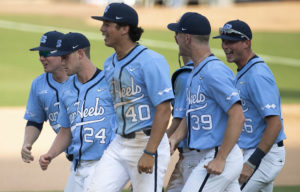 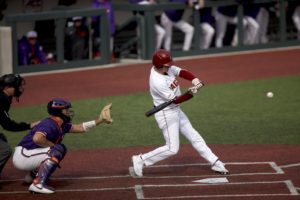 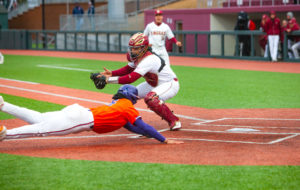