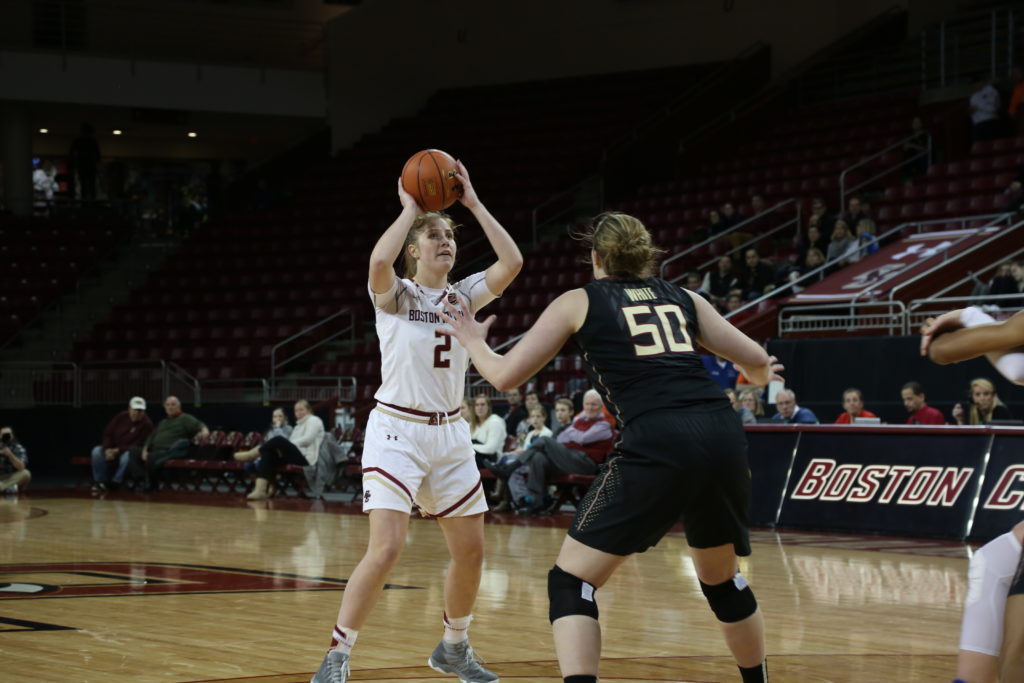 Boston College women’s basketball (7-20, 2-12 Atlantic Coast) hits the road again after a three-game homestand that saw the Eagles snap their nine-game losing streak against Pittsburgh, and then, as expected, fall in non-competitive games to highly ranked Louisville and Notre Dame.

The difficult stretch of games will continue on Thursday, when the Eagles travel to Tallahassee to take on No. 9 Florida State. The Seminoles (22-5, 10-4) have dropped just one game at home all season and will be the third top-10 opponent in as many games for head coach Erik Johnson’s crew. While FSU lost its last game this past Monday at No. 20 Duke, the Seminoles won their previous four contests, and they have a statement win over then-No. 2 Louisville on their resume.

1) BC has eclipsed 40 percent shooting just once in its past five games, the sole instance coming in the win against Pittsburgh—a team in the bottom of the conference standings. The Eagles have failed to convert 50-plus percent of their field goals in a game this season, while allowing opponents to do so on four occasions.

2) Taylor Ortlepp scored 24 points in Sunday’s loss to Notre Dame. It was the highest scoring output for a BC player this season. The Australian sophomore has put a nice stretch together, averaging 17.8 points in her last five games.

3) BC has hit 172 3-pointers this season, 15 more than its opponents—74 of these have come from freshman Milan Bolden-Morris, who has already tied Kelly Hughes’s single-season record. Graduate student Andie Anastos has transitioned from four years on the rink to the hardwood this season to boast the team’s best deep ball percentage, going 17-of-34 (50 percent) from downtown.

1) Seventy has been a magic number for the Seminoles this season—they sport a 19-1 record when scoring more than 70, but sit at just 3-4 when failing to reach that mark.

2) FSU has punished opponents on the boards. The Seminoles average 10.9 more rebounds than their opponents, with Shakayla Thomas, Chatrice White, and Ama Degbeon all posting roughly seven per game, forming a formidable frontcourt trio.

3) The Seminoles find ways to get everyone involved, with six different players averaging just under nine points per game. Thomas and Imani Wright lead the attack, each recording 17.4 points per contest.

Last February, the Seminoles, then ranked sixth in the nation, rolled over the Eagles at Conte Forum, 85-53. FSU outscored BC, 43-21, in the first half en route to an easy victory. Thomas starred, recording 20 points on 10-of-12 shooting, adding five boards and five steals. The only BC players to hit double digits, Mariella Fasoula and Hughes, are no longer with the team. FSU leads the all-time series, 14-1, and has won the last eight in a row.

It shoots above 50 percent from the field. This is a tall order, but FSU is a top-10 team that’s practically unbeatable at home. BC must get out to a fast start, hitting perimeter shots and getting good looks inside. If Bolden-Morris can heat up, BC limits turnovers, and it holds its own on the boards, it has the capability to take down this strong Seminoles team. Granted, matchups against top-10 foes have rarely gone this way—in fact, most recently, Louisville and Notre Dame both shot over 55 percent and forced a combined 35 turnovers.

It struggles to hold its own on the defensive side of the floor and allows FSU to reach 70 points. The Seminoles have shown a vulnerability when their offense fails to get going. FSU has so many scoring options that BC can’t focus on a single player and simply try to take her out of the game. If BC cannot play tight perimeter defense and concedes second-chance opportunities, it could be in for a long night in Tallahassee.