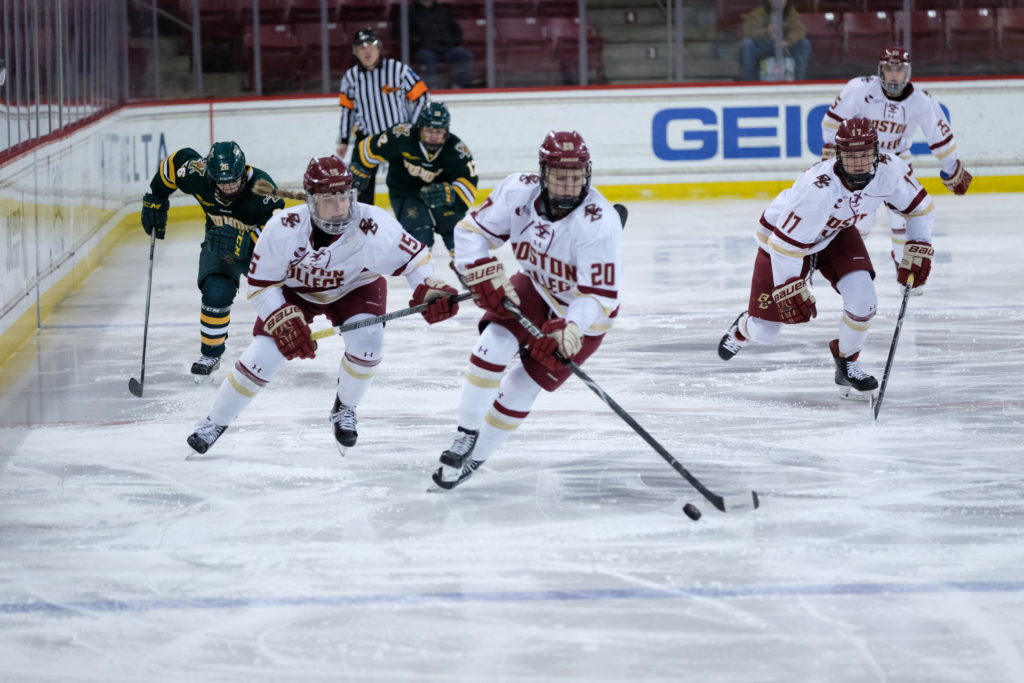 When Makenna Newkirk tripped over goaltender Sydney Scobee’s stick while skating in toward the crease, it looked like Vermont’s sophomore goaltender had successfully stopped Boston College women’s hockey from tacking on yet another goal.

Newkirk, however, while falling to the ice, kept the puck on her stick and deftly poked it into the wide-open cage. The impressive finish was the cherry on top for the Eagles (30-3-3, 20-2-3 Hockey East), who rolled to a convincing 6-1 win over the Catamounts (10-20-5, 7-14-4) to secure the Hockey East Quarterfinal sweep.

The Eagles got a slow start in the first period, as UVM outshot them throughout the first 10 minutes and had a power play chance it couldn’t capitalize on. But the tide quickly turned thanks to Erin Connolly’s efforts.

Her shot from the circle was deflected off Scobee’s shoulder, veering wide, and Delaney Belinskas’ follow-up attempt was blocked as well. The third time was the charm, though, as the puck landed right in front of Connolly. Before Scobee could cover the hole between her feet and the pipe, Connolly tipped the rebound over the crease to give the Eagles an early lead.

With their season on the line, the Catamounts rallied at the start of the second to tie up the game. Kristina Shanahan took advantage of the traffic in front of goaltender Katie Burt to take a wraparound shot. The senior was distracted with what was in front of her, and Shanahan was able to slip the puck between Burt’s legs.

The Eagles got an opportunity to regain their lead when UVM’s Taylor Flaherty was called for high sticking, but they couldn’t connect on the power play. Almost immediately after leaving the box, Flaherty was sent right back in for checking.

The back-to-back penalties would spell doom for the Catamounts, who conceded the lead and wouldn’t recover. Toni Ann Miano hit the pipe on the first power play, but got another chance during the second. Miano’s attempt from the circle made its way through multiple defenders and past Scobee, giving BC back its lead.

It was one of three points Miano tallied during the afternoon, pushing the her past the 100-career point mark. She’s one of three defensemen in the program’s history to do so, joining Emily Pfalzer and Megan Keller—two teammates who just won gold in Pyeongchang.

“Just being an upperclassman and being a senior, I feel the way [the alumni] felt, when they were here,” she said. “I’m just contributing everything I can to go out with a bang and hopefully we finish it off this year and stay positive.”

Following Miano’s goal, the Eagles’ offense took off. Just over a minute later, Kenzie Kent wrapped around Scobee and deflected the puck off the skate of a defender and past Scobee. Two minutes after that, with UVM’s Courtney Menches in the box for hooking, BC capitalized again. Following a faceoff win, Daryl Watts delivered the puck to Newkirk, who immediately took a shot on an unprepared Scobee to complete a quick reversal of what had been a 1-1 game roughly five minutes prior.

After the Eagles knocked in another goal, the Catamounts became desperate. They amped up their aggression and it proved costly—UVM piled up 29 penalty minutes to BC’s 10 in the game. The physicality peaked in the third period, when Flaherty sent Belinskas flying into the boards, leaving the sophomore crumpled on the ice. The hit drew a major game-misconduct call, and the ensuing 10-minute penalty—served by Shanahan in Flaherty’s forced absence—was all but a death sentence for the Catamounts. Both Grace Bizal and Newkirk scored late goals to bury UVM.

After slipping by the Catamounts the day prior, 3-1, head coach Katie Crowley was pleased with her team’s effort to lock up a spot in the semifinals—BC’s eight-straight appearance.

“I thought we were much better today than we were yesterday,” she said. “We’re really excited to be moving forward to the semifinals. We talk about trophies a lot, and that’s our next step on our way to another trophy.”