After a tough 28-point blowout loss to No. 9 Florida State, Boston College women’s basketball looks to finish the regular season on a high note, eying a win this Sunday against Syracuse. The Orange (21-7, 9-6 Atlantic Coast) enters the matchup riding a four-game winning streak and is the heavy favorite. Yet, the underdog Eagles shouldn’t be counted out as they make a push to end their season with a win. BC (7-21, 2-13), after all, led by two against the Seminoles at the half and have shown brief spurts of potential.

The game can be watched on ACC Network Extra.

3) BC has shot 36 percent from 3-point range over the past four games, drilling at least five triples in each game. Freshman Milan Bolden-Morris hit her 75th trey of the season against FSU, giving her the Eagles single-season record for most 3-pointers.

2) Syracuse averages 8.5 steals per game this season, with Tiana Mangakahia leading the way with 2.6 per game. The Orange have never lost a game in which it has recorded 10-plus steals.

3) Mangakahia also leads the country in assists per game, with 10.1 dimes a contest. She’s the team’s highest scorer as well, posting 17.6 points per game.

Just under a month ago, BC hosted Syracuse at Conte Forum for the teams’ first meeting of the year and the Eagles lost, 75-57. Syracuse was perfect from the free throw line (11-for-11) in the rout. BC, on the other hand, struggled to find any consistent source of offensive production. Depth was a particular concern, given that the Eagles mustered just four bench points in the loss. Mangakahia dropped 19 points and came three rebounds and an assist shy of a triple-double, while the Eagles were paced by a 17-point, nine-rebound effort from Georgia Pineau.

It takes care of the ball. In five of their seven wins, the Eagles have ended regulation well under their 17-turnover per game average. The Orange love to poke the rock loose, so ball security is a must if BC is to have a shot at a win. Additionally, head coach Erik Johnson’s team has to attack the paint and draw fouls in an attempt to get to the charity stripe. In the past two games, the Eagles have made a total of eight free throws, a stark contrast to the 25 they hit against Pitt.

It’s unable to defend the perimeter. The Eagles have not won this season when allowing 10 or more 3-pointers in a game. Syracuse is 13-1 while making double-digit 3-pointers, including the win over BC earlier this season—the Orange converted 10 attempts from long range. The battle beyond the arc will play a huge part in the outcome of Sunday’s matchup, as the Eagles rank third-to-last in the ACC in perimeter defense. 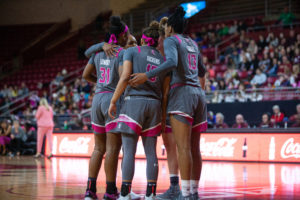