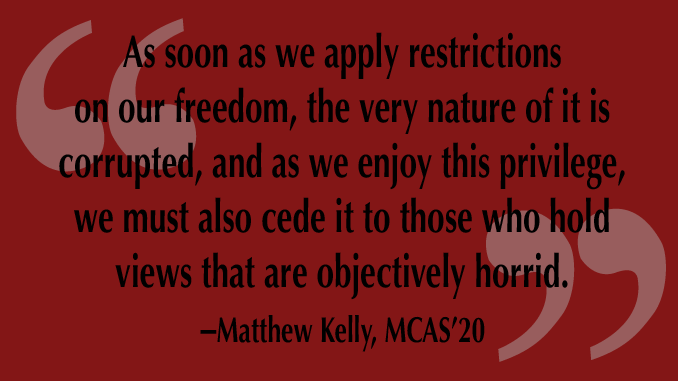 In the Boston College’s Code of Conduct, students are first and foremost granted  “the right to learn, which includes the right of access to ideas, the right of access to facts and opinions, the right to express ideas, and the right to discuss those ideas with others.” It seems rather obvious then that freedom of expression is cherished by all—that is until a distasteful utterance invades our ears, and suddenly there are calls to choke our precious intangible right. It is almost unimaginable that a tragic war is still being waged on freedom of expression across college campuses and within the world at large. As our time here burgeons quickly, we must realize that limitations on expression and inquiry are in actuality limitations on our capacity to flourish. This isn’t to say we shouldn’t do our utmost to cultivate cultural mores of reverence and tolerance, lambasting harassment and baseless rancor. In the same vein, limiting our experiences by restricting our words can breed even more harm than ephemeral confabulation. How, then, are we limited here at Boston College? Restrictions manifest themselves chiefly in what we are exposed to: who speaks on campus, what artists perform, which professors are hired. In these ways, the restrictions on our freedom of inquiry are latent barriers, and their existences are arcane among students.

Robert Hutchins, former president of the University of Chicago, encapsulated the spirit of these freedoms brilliantly. When asked about communist speakers on his campus in 1902, he responded that  “free inquiry is indispensable to the good life, that universities exist for the sake of such inquiry, [and] that without it they cease to be universities.” Thus it is the disposition towards freedom and individual expression rather than shelter from offense that makes universities the reputable institutions they are. We attend universities not in hopes of reinforcing everything ‘a priori’ but rather to strip ourselves of what we thought we knew and reconstruct ourselves within the dichotomy of new and old. As we remove the risk of offending others, we abandon the prospect of striving toward that which we do not already possess.

Advocating for freedom of speech and all of its bluntness is not to be taken as advocacy as speech that can appear racist, sexist, or discriminatory in general—in fact, it is just the opposite. As we work to culturally expunge discrimination from our society, the freedom to exclaim inflammatory views actually aids in identifying those who are promulgating hate within our society. And just as I have the freedom and voice to serve this platter of views, all have the right to critique my plate. Our third president, Thomas Jefferson, summarized perfectly, “Our liberty depends on the freedom of the press, and that cannot be limited without being lost.” As soon as we apply restrictions on our freedom, the very nature of it is corrupted, and as we enjoy this privilege, we must also cede it to those who hold views that are objectively horrid. Yet, it is again through our privilege that we can support the values and ideas contrary to these horrid beliefs and rid them from our society.

Recently within our own student government, a highly offensive statement was offered on social media by a senator following the elections of a new UGBC president. While there is little to debate over just how insensitive this statement was, it is highly important to recognize the gravity of freedom of expression in this situation. This uncrafty witticism revealed to all the true character, or lack thereof, of the senator who made it, and thus helps us move forward as community, exposing and objecting all intolerant views.

One particular example of rationality in the speech debate is from Jordan Peterson, freedom of expression defender and well-respected Canadian intellectual. In a recent interview, when asked why his right to freedom of expression should be held above another’s right of avoiding offense, he explained that “in order to be able to think, you must risk being offensive.” Such a minuscule quip is quite telling because it perfectly verbalizes the subjective nature of offense as well as the major impairment to intellectual pursuit through restriction of speech. He continued emphasizing his respect for all people, but refused to “cede linguistic territory” to those attempting to curb our own natural freedoms.

The hostility surrounding freedom of expression is embodied across campuses nationwide. Numerous colleges have employed and celebrated the idea of safe spaces, and the only true result is systematic intolerance to speech that is opposed to one’s liking. In the Twentieth century, radical leftists were ostracized, but today, people target anyone from a moderately right leaning politician to a classical libertarian. Yet there did not exist a time nor place where this censorship was beneficial or generally progressive—these kind of actions were not then, and are not now. Boston College should strive to beget an atmosphere that is actually representative of our so-called first right as students, inviting controversy in hopes of extracting cosmos from the chaos. We must make a continual effort, here, to invite speakers of all kinds and on all aisles. Until then, Boston College is not truly committed to the ideal of free expression.

Benjamin Franklin once asserted candidly, “If all printers were determined not to print anything till they were sure it would offend nobody, there would be very little printed.” It is in this tone that this very paper may be certain to offend some, despite its petitions both for the protection of its own expression and the potential expression of its own critiques. We must be able to opine at one’s own will, not at the discretion of another. Certainly with this tremendous freedom comes equal responsibility—the duty to use it correctly and efficiently towards intellectual and societal prosperity, rather than apprehension of plausible offenses.Without the unfaltering obligation of our University to protect our freedoms of expression, inquiry, and discussion, we would no longer reap the intellectual crop that is born from such freedoms— then we all may be left wondering why it is exactly that we are here.