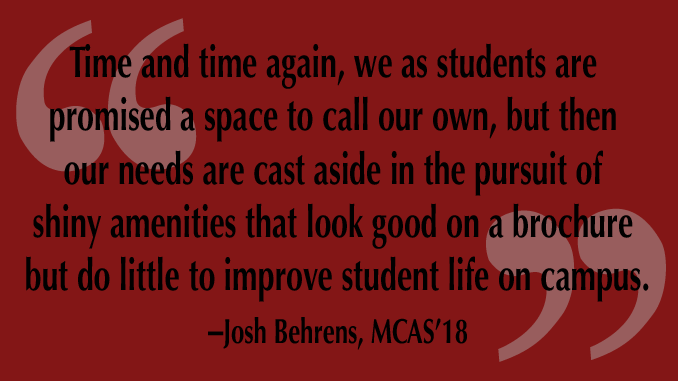 “The building boom on the Heights is here to stay—keeping the University apace with major institutions of higher learning across the nation in expanding physical facilities to meet the problem of expanding enrollments … Among the buildings planned for construction in the near future is one in which students themselves can have a hand in planning. This is the Student Center.”

Sound familiar? While this quote could have been ripped straight from the lines of a Heights article about BC’s recent strategic planning initiatives, it’s actually from a 1959 Heights article entitled “Student Center: A Near Reality?”

Nearly 60 years ago, BC began discussing building a student center. We are still having that conversation. What follows is the long, tragic saga of a BC student center that may never be.

Back when The Heights was writing that a student center might be a near reality, BC was undergoing a radical transformation. Emerging from its early days as a small, all-male, Irish-Catholic college, BC was growing into a prestigious, nationally-recognized university. Along with this newfound growth came a flood of money, which was invested in creating the campus we know today through a multitude of construction projects. Part of the plan to transform our humble college into an academic juggernaut was to construct a student center like our peers Notre Dame and BU already had.

BC started construction on McElroy in 1960 with the intention that the “modern Gothic” building would function as a student student for the burgeoning student body. Within a decade, however, BC discovered that McElroy did not function well as a student center, turned Mac into a dining hall, and retrofitted O’Connell House into a quasi-student center in 1969. O’Connell was still being used as a student center in the late 70s despite a leaky roof. While BC had planned to build a student center in its strategic plan in 1972, the administration reneged on this promise in 1977 saying, “There is no way that we are now planning a Student Center.”

Student activism didn’t die down, though. A letter was submitted to the Trustees in 1990 detailing the urgent need for more communal space and a petition was signed by over 3,000 students in 1991 in support of a student center. BC continued to climb in the ranks, but the lack of a student center haunted the Heights. The 1991 Insider’s Guide to College and Universities said, “’The one thing that B.C. is lacking is a student center.” The negative national attention and active student body finally pushed BC over the edge, and in 1995, BC announced that it would complete a student center in January 1997.

Of course it couldn’t be this simple—this is BC we’re talking about. The city of Newton halted the student center proposal in the approval process due to concerns about noise and traffic. These fears were fueled by a Marathon Monday party that got out of control earlier that spring. BC’s 40-year old desire for a student center was put on pause yet again. The case bounced around in courts for over a decade with no conclusion.

After purchasing Brighton Campus in the mid-2000’s, BC paid lip-service to the possibility of a student center. Executive Vice-President Pat Keating said in 2004, “If there is major construction to be done, the student center would be first.” A Heights poll in 2003 showed that 86 percent of students supported building a student center. Then, in 2007, BC included plans for a student center in its $1.6 billion Strategic Plan. Apparently, the project reached the blueprint stage and then silently petered out with no explanation.

Some lessons can be learned from this tragic chronology: First, throwing Marathon Monday parties rowdy enough to piss off the entire Newton community and its abundant legal resources is a bad idea. More important, however, is that the BC administration has continually paid empty lip-service to the idea of a student center without actually committing to its promises. Time and time again, we as students are promised a space to call our own, but then our needs are cast aside in the pursuit of shiny amenities that look good on a brochure but do little to improve student life on campus. BC has rarely prioritized student needs for nearly 60 years. This cannot continue. If we band together to demand a student center like our alumni did in the early ’90s, we can fulfill the long struggle for communal space on campus.

A student center would be a great step forward in combating the alienation many students feel on this campus. It would allow for clubs to have meeting spaces and offices, and start to bridge connections between the various organizations that are very segregated in their tiny communities right now. With student input, we could construct a building to suit our needs and not just another trendy café with $10 pizzas. Before we can even dream up what will be in this mythical student center, however, the first step is forcing BC to follow through on its promises. Like Eagle Debbie Knapman said in 1987, “There are so many things I’d like to see in the student center but there is no way it will be done before the year 2010.”

If only, Debbie, if only.