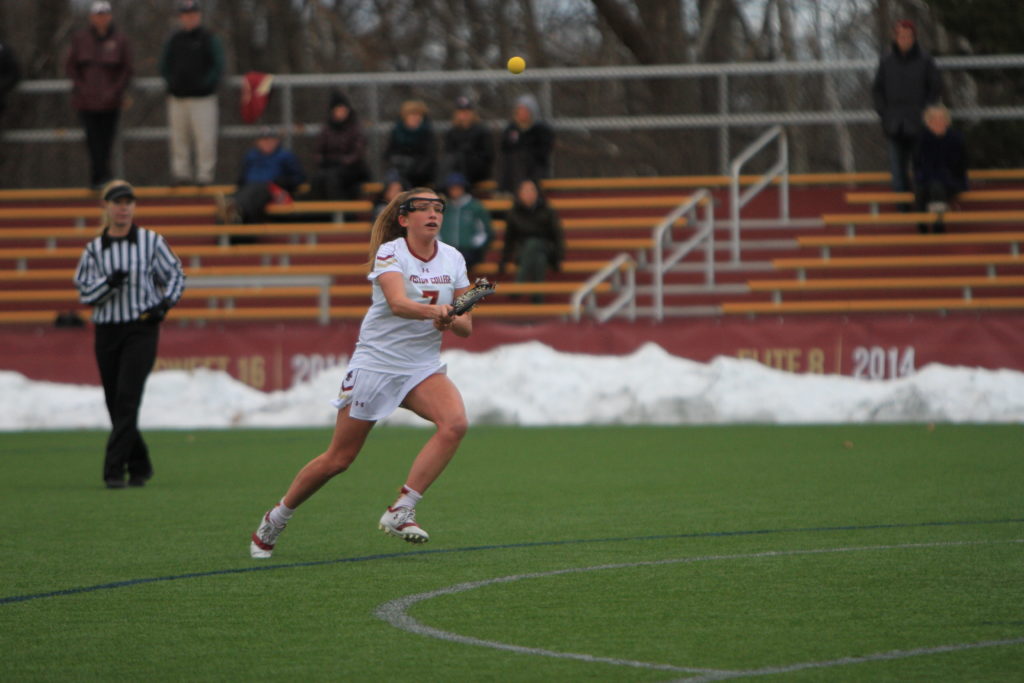 Fresh off a win over last year’s year NCAA semifinal opponent, Navy, Boston College lacrosse (6-0, 1-0 Atlantic Coast) looks to continue its perfect start to the season when it hosts Binghamton (3-1) on Friday afternoon.

The game will be streamed live on WatchESPN.

1) After her program recorded a nine-goal effort against Navy, Sam Apuzzo is averaging 5.0 goals per game and now leads the country in that department.

2) In addition to Apuzzo, the Eagles are one of the country’s most prolific scoring teams. They average 18.17 goals per game, good for the fourth best mark in the NCAA.

3) BC has won seven-straight home games, dating back to last season, and four in a row to start off 2018.

1) Binghamton forces 15.67 turnovers per game, and leads the country in forcing giveaways.

3) Binghamton’s leading scorer, Jacqueline Kennedy, has 11 goals in four games and also leads the Bearcats in turnovers forced with 21.

BC and Binghamton have never played before.

Its offense continues its early season form. The Eagles have been scoring goals at will this season, racking up at least 13 in every one of their games this season. And, beyond that, the Eagles rank in the top 10 of the country in scoring margin, shots on goal per game, and points per game. If Apuzzo, Dempsey Arsenault, and Co. keep ripping twine, the Eagles should be able to overwhelm the Bearcats.

It turns the ball over too often. The Eagles have been running like a well-oiled machine early in the season, but they should get a solid test from a Binghamton team that has thrived on gaining extra possessions and, consequently, breakaway goals. BC only committed 11 turnovers against Navy and should be in good shape against Binghamton if it can replicate that effort. But if BC is harassed and hurried on the offensive end of the field, it could be looking at its first defeat of the season.