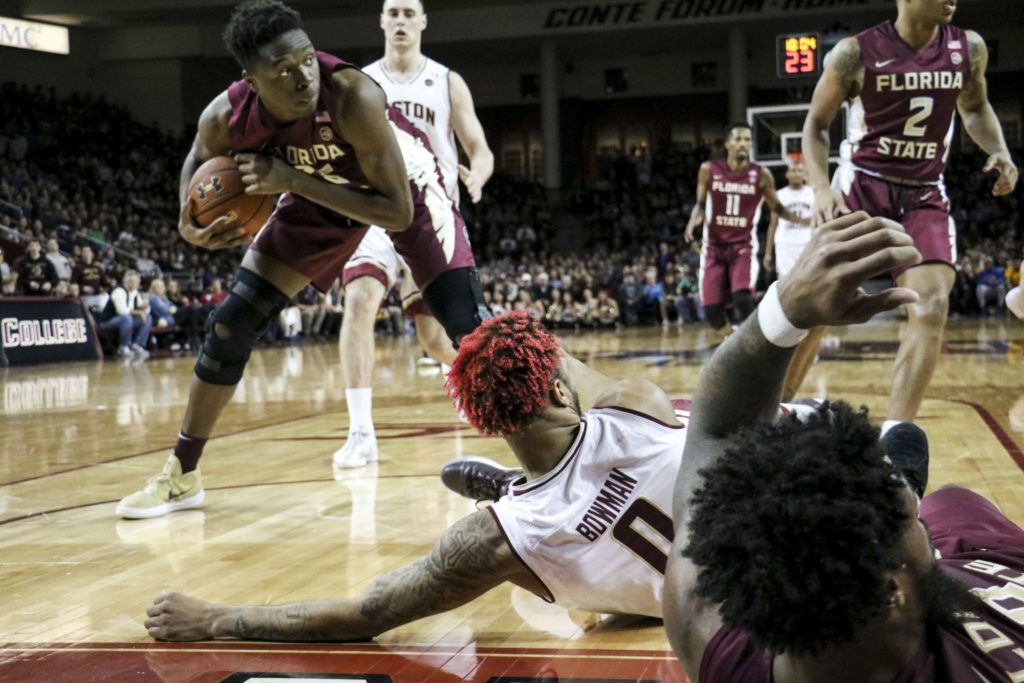 It won’t come as a surprise that in the Three Up, Three Down section below, there’s going to be a split between the first half, where Jordan Chatman’s efforts led the Eagles (17-14, 7-11 Atlantic Coast) to a two-point halftime lead, and the second, where Florida State (20-10, 9-9) shot 58.1 percent from the field to pull away late, winning by a final score of 85-76.

BC’s regular season has come to an end, and analysts will be taking a closer look at them going into the ACC Tournament next week, but honestly, there’s only three questions that need to be asked of this Eagles team.

Are they the team that showed up in the first half, which was good enough to secure a lead over a theoretically superior conference opponent without its best player playing his best? Or are they the team that missed its last 10 field goals, couldn’t make a shot for over six minutes, and shot a paltry 38 percent from both the field and the 3-point line?

And lastly, who is going to play for them now?

Chatman was the most dangerous Eagle in the first half, and it wasn’t that close. Ky Bowman scored nine points on 3-of-9 shooting, but Chatman was the star. The BYU transfer put up the kind of numbers that get you an upset win: 13 points on 5-of-8 shooting from the floor, while shooting 3-of-5 from beyond the arc. Whenever Chatman is playing well, the BC offense really opens up. For the Eagles to win ACC games, they can’t rely solely on Bowman and Jerome Robinson to eek past conference opponents—the league is far too strong to rely on just two players for 40 minutes. BC has, at times, looked like a far superior team against some really excellent conference opponents when Chatman is on a hot streak (see: the Duke game). As the Eagles enter the ACC Tournament, Chatman’s apparent return to form first against Syracuse earlier in the week and now against FSU has to be heartening for BC fans.

Chatman fueled BC’s excellent long-range shooting in the first half, but the Eagles as a whole shot 50 percent—a mark that typically guarantees victory. Bowman hit one of his two 3-point attempts, and Ervins Meznieks came off the bench in place of injured starter Steffon Mitchell and hit his lone first half 3-point field goal. One of the few bright spots of the second half was Bowman’s performance, when he was able to find open shots from deep and in the paint. The reason for that was that the Seminoles had to respect BC’s outside shooters based on their first-half performance. Yes, the Eagles struggled in the second period, but FSU was clearly fearful of letting any of BC’s shooters heat up like they did in the first half. The Eagles need to shoot well from deep if they are going to make waves next week, and if Chatman, Bowman, and Robinson are at the top of their respective games, no team in the ACC will want to play BC.

Even without their best rebounder in Mitchell, the Eagles really were impressive on the boards. Although the Seminoles won the battle, 38-36, for BC to keep matters close on the glass at all is a victory in itself. FSU center Ike Obiagu is a 7-footer, and he did secure 12 rebounds on the day, but the Eagles threw Nik Popovic, Luka Kraljevic, Johncarlos Reyes, and Meznieks at the big man throughout the afternoon. None of those players are known for their physicality, and Meznieks hadn’t played a minute in weeks, but in the end, they did enough to neutralize the Seminoles’ larger frontcourt. Yes, Robinson led BC with an 11-rebound effort—a career best—but it was the work of his teammates down low holding back FSU that allowed the junior to swoop in and trigger the fast break. The Eagles actually won the offensive rebounding contest, 9-8, an extreme rarity and quite the feat to pull off without Mitchell.

BC held the Seminoles to 42-percent shooting in the first period. Not unbelievably amazing, but considering how well FSU shot the ball in the second half, this was relatively solid work. The Eagles’ zone defense caused the Seminoles all kinds of problems, holding FSU to a 29-percent mark from beyond the arc. BC forced 10 turnovers and established its lead in the first frame by capitalizing on seven early Seminole turnovers.

Chatman went 2-of-7 from the floor and 1-of-6 from downtown in the back half of play. As poor of a clip as that is, the stint was even more detrimental considering that the Eagles leaned on the junior heavily in the opening period. After a disastrous February where the junior shot over 40 percent from the field just twice, it appears as if Chatman is still starting to put his early season shooting form back together. It’s irrational to expect him to shoot 50 percent from the floor in the tournament, but BC needs Chatman to be more consistent on a half-to-half basis if it’s going to prolong the season.

The Eagles’ shooting woes were detailed in the opening paragraph, but 38 percent is unacceptable, as is 0-of-10 to close a game. Though the last 90 seconds were marred by injuries to Kraljevic (he was concussed) and Robinson (he reaggravated his elbow injury from the North Carolina State game), this cold stretch began long before that point. Bowman came alive at the start of the second frame, scoring 11 points in the first eight minutes, and then the sophomore cooled right back down, only getting three more shots up in the final 12 minutes of regulation. FSU’s press clearly confused BC, which had to ask Popovic to bring the ball up frequently since the Seminoles often denied it to Robinson and Bowman, while Chatman was trusted with inbounding duties. Popovic went 3-of-10 for the game, Robinson was 6-of-14, and Kraljevic was 1-of-4 before going down with a head injury. Perhaps BC ran out of gas: Bowman played 40 minutes again, Robinson logged 38 before he got hurt, and Chatman racked up 38 as well. By the end of the game, those three really needed to be on the court because the Eagles were running out of players (we’ll get there), but BC’s leading scorers have had to play that much all season, and as the year winds down, it could be tough to keep asking the trio to keep this up while playing their best basketball. The ACC Tournament is grueling, with a handful of back-to-back games, if you’re lucky. Can the triumvirate survive the week, let alone one more game?

Surrendering 58-percent shooting is not optimal. Head coach Jim Christian switched things up a few times, going from zone defense to man back to zone over the course of the half, but regardless of what defense BC was running, it got killed down low in the second half. FSU drifted away from the 3-point line, shooting just 2-of-8 from downtown, and instead headed for the paint. The Seminoles had the edge in the key, 48-22. Without Mitchell, Popovic and Kraljevic had a hard time defending the rim. Trent Forrest and Braian Angola slashed to the basket over and over again, finishing with 21 points each, even though the duo only hit one 3-pointer. The Eagles surrendered 42 points combined to those two Seminoles, and 39 of them came the old fashioned way. Forrest and Angola teamed up to shoot 13-of-16 the free throw line, and it felt like BC was surrendering and-ones, left and right, in the second half.

A lot of Eagles fans seemed unhappy with the officiating during the game. BC was called for 21 personals, Meznieks fouled out of the game, Kraljevic had four fouls in 26 minutes before he was injured, Popovic picked up two early fouls, and Reyes finished with two fouls in just nine minutes. That seems like a lot, but FSU was called for 18 personals, Obiagu fouled out of the game, Angola played with four fouls, and Phil Cofer was called for three. That’s really even in the aggregate, and yes, it must have been frustrating to see Meznieks have the game of his career and foul out, but he kept committing pretty blatant offenses and looked overwhelmed on the defensive end. Without Mitchell, it looked like the Eagles got foul-happy, attempting to limit the Seminoles’ penetration, and it didn’t work. Without Mitchell, Kraljevic, or Meznieks, Christian was forced to play Vin Baker Jr. down the stretch, and Avery Wilson saw the court when Robinson went out in the last minute. BC needs to get healthy more than anything, but while it’s shorthanded, it’ll have to be more disciplined.