Home » BC Can’t Cap Comeback at No. 23 Mississippi State 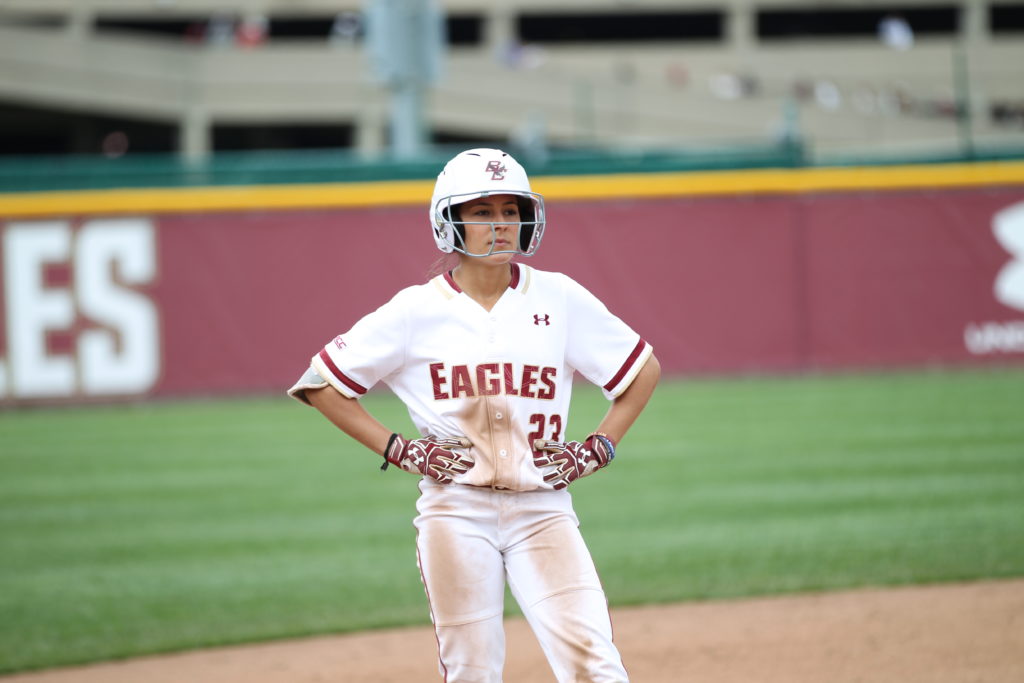 BC Can’t Cap Comeback at No. 23 Mississippi State

On Tuesday, senior captains Jessica Dreswick and Chloe Sharabba carried Boston College softball to victory over No. 18 Ole Miss. Dreswick threw a complete game, struck out 10 batters, and looked unhittable for most of the night. Sharabba reached base and crossed the plate three times, fueling the offensive awakening the Eagles had been searching for all season.

Less than 24 hours later, the captains weren’t able to replicate their dominant performances against Mississippi State, but their teammates almost pulled out BC’s second-straight win over a ranked opponent. Nevertheless, the No. 23 Bulldogs (17-3) prevailed, 4-3.

Dreswick went four-plus innings, throwing 70 pitches, less than a day after she tossed 140. She only managed two strikeouts, a number that stands out as surprisingly low, considering she came into the matchup averaging slightly over a strikeout per inning. Her record dropped to 5-4, despite her ERA sitting at 2.57 on the season for BC (6-10).

By no means was this a disaster of an outing—Dreswick surrendered four earned runs on five hits, walking just one batter and hitting her final opponent before she gave way to fellow captain Allyson Frei. The only reason it stands out is because the expectations for Dreswick are so high this year, in large part because of her documented success on the rubber.

The same goes for Sharabba: She went 0-for-4 with a strikeout, stranding three runners on base for the game. The senior came into the game hitting .396, which dropped to “just” .365 after Wednesday’s performance.

But in the stead of the usually excellent performances from the duo, the Eagles’ offense was ready to step into the breach, specifically in the form of Lexi DiEmmanuele’s bat. The junior came into this two-game stretch hitting .200, but after today’s 3-for-3 effort, she can lay claim to a .245 average.

Before DiEmmanuele could get on base, the Bulldogs struck for all four of their runs in the first inning. After pitcher Cassady Knudsen struck out the side to open the game, the bats quickly came alive. Kat Moore knocked a first pitch single into right field, and Mia Davidson walked on four pitches. Dreswick seemed to settle in against Reggie Harrison, who struck out looking on three pitches, but a Sarai Niu single knocked Moore in for the first tally of the evening.

Emily Heimberger tacked on a single of her own to left to bring home Davidson, and, a few batters later, Morgan Bell doubled to score Carmen Carter and Heimberger. Although nobody knew it at the moment, eight batters would be all Mississippi State needed to secure the victory. The game was far from over, though.

After a Cami Sellers walk to lead off the second inning, DiEmmanuele stepped to the plate and dropped a bunt directly between Knudsen and her catcher, beating the ensuing throw by a full step. The senior pitcher then hit CC Cook with a pitch, bringing up Allyson Moore.

Moore laced a grounder that was too hot for Niu to handle at first base, hopping into the outfield and scoring Sellers and the speedy DiEmmanuele. That’s all BC would muster in the frame, but to get the game back to a two-run deficit that early was vital to any chance the Eagles had for any potential comeback effort.

Dreswick held strong for the rest of her outing, giving up just a single hit in the fourth inning before giving way to Frei, who didn’t let up a hit but struggled with her control at times, walking two in her two-plus innings of work.

DiEmmanuele pulled off another bunt single in the same fashion in the third, but her teammates weren’t able to crack Knudsen’s code and even the score. The junior center fielder was the only one that had any luck driving in runs, slapping a single to left to score Annie Murphy in the fifth.

BC wouldn’t get any closer, though, failing to register another hit in the game. Murphy was able to reach on an error in the seventh, but, soon after, Bulldogs reliever Holly Ward sealed the deal. The Eagles will rue the seven runners they left on base, but Dreswick and Frei combined to strand five baserunners themselves. In an even game, a tough first inning was just too much for BC to overcome.

Such a result is a typical casualty of the Eagles’ brutal schedule thus far. Seven of BC’s 10 early-season losses have come by two runs or less after dropping the Mississippi State matchup, but this two-game stretch showcased the best of the Eagles. Dreswick and Frei pitched well, the offense erupted against Ole Miss, and DiEmmanuele’s efforts kept BC in Wednesday evening’s affair. A month into the season, the Eagles seem to be building some positive momentum, despite their slow start to the 2018 campaign.