In recent years, cyber criminals have become increasingly more challenging to persecute, implementing methods that law enforcement officials have trouble keeping up with. As such, the agents and businesses fighting cybercrime need to have higher technological proficiency and literacy.

On Wednesday, Boston College held the Boston Conference on Cyber Security (BCCS), where keynote speaker FBI Director Christopher A. Wray addressed how the bureau can serve this need by evolving with the ever-changing internet landscape.

His remarks centered around changes in cyber security since he left government work in 2005. As the internet has evolved to become the centerpiece of Americans’ daily lives, criminals have taken advantage of this, making it a much more dangerous and difficult space to police.

He disclosed that while the FBI received plenty of warrants in the past year to gain access to digital evidence on devices, the bureau was unable to access over half the information on those devices, which totaled 7,775, making it more difficult to prosecute the cases in which those electronics were involved.

“Being unable to access nearly 7,800 devices per year is a major public safety issue,” Wray said. “That’s more than half—more than half—of all the devices we tried to access during that time period. And that’s just at the FBI, that’s not even counting devices sought by other law enforcement agencies.”

Wray went on to say that although the FBI supports information security measures, intelligence agencies need programs working to protect the privacy of users to be thoughtfully designed to leverage the legal tools at their disposal. Otherwise, those programs get in the way of digital evidence gathering, which can compromise the foundation of an investigation if the information being sought is sensitive enough.

BCCS, the second-annual cyber-security conference hosted by the Woods College of Advancing Studies and the FBI, was launched after BC established its master program in cyber-security policy and governance program in 2017. Last year’s conference featured former FBI Director James Comey in the midst of controversy surrounding President Donald Trump’s claim that the Obama Administration tapped his phone calls, and Comey’s pushback against this claim — Trump fired him two months later.

Members of the cyber-security community both in the public and private sector gathered to listen to remarks from various speakers, including Wray; Harold H. Shaw, special agent in charge of the Boston FBI office; David Wajsgras, president of intelligence and information services at Raytheon; and Jeh C. Johnson, former secretary of homeland security. Other members of the BC community spoke at various panel discussions throughout the day.

Wray cited nation-state supported cyber threats as a new development with which the FBI is particularly concerned. The hostility currently existing between the United States and countries like Russia and North Korea have pushed the bureau to adopt new strategies in pursuing digital criminals, such as indicting the country’s foreign adversaries.

In fact, he believes that this strategy is permeating every agency involved in ensuring cyber security. The “blended threats” posed by nation-state agents teaming up with mercenaries to commit crime and perform espionage has made it more necessary than ever for cyber security experts across the public and private sector to work together. He cited the Joint Terrorism Task Force, which began facilitating counter-terrorism operations after 9/11, as the guiding light for how agencies and the private sector can team up to make prosecuting threats more efficient.

By matching the strengths of federal, state, and local law enforcement agencies with those of private organizations, Wray believes that the new task forces, specifically geared toward fighting cyber intrusions, will be greater than the sum of their parts.

The FBI and its partners are looking to take down entire criminal infrastructures rather than just the criminals that populate them. Last year, for example, the FBI and its partners shut down the largest illegal marketplace on the dark web, AlphaBay, by strategically coordinating action between different law enforcement agencies.

“We worked with the DEA, IRS, Europol, and a whole bunch of our partners from around the globe to dismantle that illicit business completely,” Wray said. “But, in a way that maybe was different from the past, we tried to be a little more strategic about it—we didn’t want to just rush in and lose criminals. So we waited patiently, we coordinated with the other agencies and we watched.”

When they struck, the agencies were able to shut the site down and many criminals, but those that got away went to another site where Dutch authorities were waiting for them, thanks to the coordination between each agency.

Wray continually pointed to 9/11 as the moment that changed the way in which intelligence agencies and the private sector worked together to investigate crime. He admitted that what he was doing 15 years ago was easier to handle than the online threads current FBI investigators have to untangle, but he believes that the digital revolution is shaking the foundations of the intelligence world again as more and more emphasis has to be placed on the actions taking place in the deep recesses of the Web.

He closed his remarks by asking businesses to reach out whenever they think there is a threat or problem to law enforcement. Although there are times when that can seem difficult or problematic, the purpose of the FBI is to treat victim companies as victims, not perpetrators, and the bureau recognizes that the line can be thin when approaching cases. What is most important to Wray is that threats are dealt with, and the only way to do that is by having victims report what is going on.

After Wray brought his talk to a conclusion, Shaw was made available to reporters. When asked if the bureau can monitor the web 24 hours a day, Shaw made it clear that it could not, since there are privacy laws preventing them from watching everything that is going on. He cited the work his offices do with the state police and other law enforcement agencies as how the FBI tries to cover the wide swath of material circulating through all the different social media sites.

Shaw also confirmed that Russia is an active adversary all over the country.

“It’s a concern,” he told reporters. “When you have the world-renowned colleges and universities that we have [in Boston], when you have the research and development that is happening in our backyard, you have Fortune 500 companies—you could expect that our adversaries are looking at any of that stuff.

“I can tell you that we are always proactively looking for that thread, we’re mindful of it, and we’re doing everything in our power to stay in front of it.” 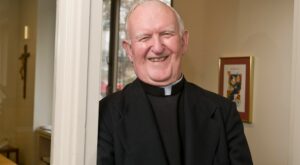