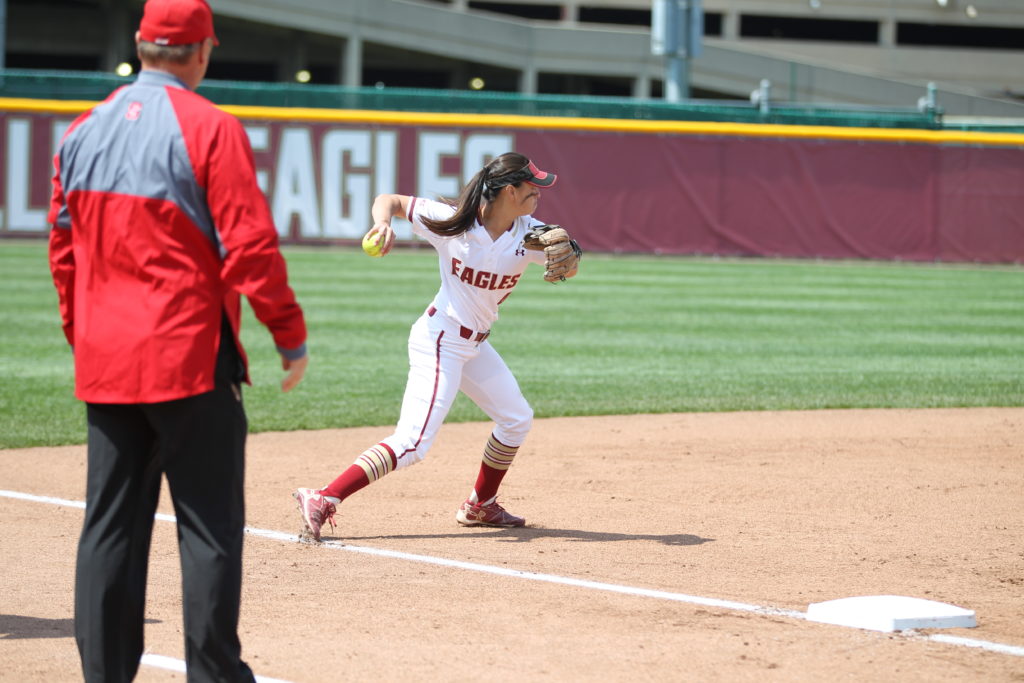 Boston College softball entered the seventh inning of Sunday’s contest—the final game of the Easton Crimson Classic and the tail end of the Eagles’ seven-game road trip—tied with Fordham, only to watch the unlikeliest of heroes step up to the plate.

Jordan Chimento, who came into Tuscaloosa, Ala. with just four hits all season, matched that mark in the five-game set with a single to lead off the frame. The ensuing batter, Allyson Moore hit a ground ball to second base, giving Chimento enough time to advance safely. After walking C.C. Cook, Madie Aughinbaugh threw a wild pitch, moving both runners into scoring position. All Lexi DiEmmanuele had to do was lay down a suicide squeeze, and Chimento bolted home for the game-winning run.

Chloe Sharabba scored Cook with a single to center field, just for good measure, and fellow senior Jessica Dreswick locked up not only her sixth complete game of the season, but also a 4-2 victory—BC’s third of the weekend, marking the first time all year that head coach Ashley Obrest’s team exited an early-season tournament or classic with a winning record.

Dreswick got off to a rocky start to say the least. The Eagles’ (9-12) ace walked Paige Rauch on four pitches, then gave up a single right up the middle to Chelsea Skrepenak. She finally pulled herself together and forced Skylar Johnston to ground out, but in doing so, Rauch and Skrepenak advanced to second and third base, respectively. With a 2-2 count, Madi Shaw ripped a single through the right hole, bringing both Rams (6-14) home. Dreswick retired the next two batters, but the damage was already done.

Slowly but surely, BC chipped away at Fordham’s lead. In the third inning, Sharabba scored Gianna Randazza—who logged her first collegiate double earlier in the frame—on a sacrifice fly to cut the Eagles’ deficit in half. It wasn’t until the sixth inning that the bats came alive again. That’s when Sharabba singled to shortstop and made her way around the basepath, thanks to a fielding error, lineout, and sacrifice fly. The run opened up the gates for BC’s seventh-inning scoring spurt—one that all but clinched the comeback victory.

The Eagles didn’t come from behind on Saturday afternoon. In fact, they found themselves on the other side of things, blowing a three-run lead to No. 13 Alabama, dropping their second game in as many days to the Crimson Tide, 6-3.

Right off the bat, Sharabba doubled to left field, and Carly Severini reached base on a fielder’s choice, setting up a three-run Cami Sellers jack, her team-leading third home run of the year. Yet it was only a matter of time before the home team answered. In the second inning, Merris Schroder booked a trip to first with a four-pitch walk. Soon enough, she’d cross home plate, after stealing second and capitalizing on a pair of throwing errors. One frame later, Kaylee Tow hit a two-bagger to center field and, following back-to-back walks, tagged up on a fly ball and sprinted home to draw Alabama (17-5) within one run of BC.

The Crimson Tide turned the game upside down in the bottom half of the fifth inning. Bailey Hemphill took the second pitch she saw down the left field line for her fourth home run of the season. Then, Gabby Callaway blasted a double, chasing Dreswick. Allyson Frei fared no better in the circle, walking both Peyton Grantham and Schroder. The redshirt junior got Sydney Booker to fly out into foul territory, but the ball had enough distance to score Rachel Bobo, who was pinch-running for Callaway. To make matters worse for BC, Demi Turner singled up the gut, bringing home Grantham, pushing the Crimson Tide’s lead to two.

Tow put the Eagles to bed in the sixth with a solo homer to right center, putting a damper on BC’s 4-0 shutout win over Samford (5-18) earlier that day.

Frei was on her game, the minute she took the circle—when all was said and done, the righty racked up a season-high eight strikeouts, notching the 28th complete game of her career. The offense had her back too, recording five hits and four runs, three of which were merely insurance.

DiEmmanuele jumpstarted the scoring effort in the opening frame, taking a base on balls. She swiped second and then journeyed home, following a Sharabba grounder and a fielding error. The speedy outfielder was back at it again in the ensuing frame: DiEmmanuele lasered an RBI triple to left field—her third in five days—and then crossed the plate herself when Sharabba threaded a single through the left side of the diamond. Severini homered to left field in the back half of the fifth, putting an exclamation point on BC’s convincing victory.

The Eagles knew a thing or two about shutouts—after all, they were blanked, 5-0, by Alabama on Friday night. Frei had the Crimson Tide’s number early, hurling two-straight hitless innings. But everything went downhill in the third frame.

Elissa Brown reached first base on a fielding error, Tow drew a walk, and, to cap it all off, Callaway tattooed a three-run shot over the right field fence. Brown and Tow also had a say in Alabama’s next and final two runs, both hitting RBI singles to shortstop in the fourth inning. Meanwhile, BC was absolutely helpless in the batter’s box. Alabama pitcher Alexis Osorio spun the seventh no-hitter of her career, rolling through the Eagles’ lineup with ease.

The lack of success at the plate was a stark contrast to BC’s weekend opener. Led by Cook, the Eagles exploded for nine runs over the course of the final four innings of play, en route to a 9-2 win over Samford.

Dreswick pulled most of the weight in the early portion of the game, though, tossing five hitless frames. Eventually, DiEmmanuele tipped the scale in the top of the fourth with a triple that gave Sellers ample time to score BC’s first run of the day. Moments later, Cook hit a single to right field, and DiEmmanuele crossed the plate herself. The Eagles broke open the game in the fifth frame. Annie Murphy dialed up a triple to left center, scoring both Randazza and Chimento. Severini sent Murphy home with a sac fly to wrap up the three-run inning. BC played small ball the rest of the way using two sac flies, a fielding error, and single to record its last three runs of the game, distancing itself from the Bulldogs by the frame.

The Eagles alternated wins and losses throughout the Easton Crimson Classic, but continued their quest back to .500. Now the focus shifts to ACC play, where BC’s season will really be determined.