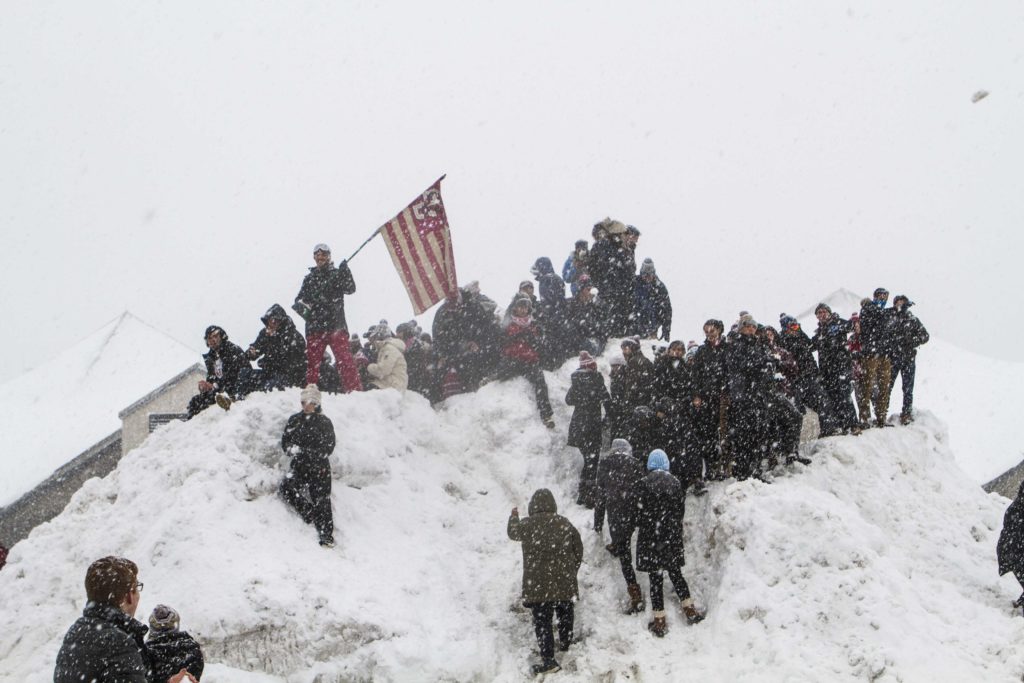 A third powerful nor’easter in less than two weeks blanketed Boston College in 13.3 inches of snow as of 7:25 p.m. on Tuesday, forcing administrators to cancel classes for the day. Students around campus rejoiced because of the day off, which came only one day after they returned from Spring Break. BC announced Tuesday night that the University would be open at 9 a.m. Wednesday, a slight delay.

Numerous students gathered in the Mod parking lot for a snowball fight at 5 p.m. organized by The New England Classic. A group of students climbed a mound of snow, hoisting a BC flag, while others gathered around to socialize and enjoy the day off.

Approximately 20 to 30 minutes into the event, however, BCPD arrived to end the gathering.

The University announced its closing around 10 p.m. Monday evening via Facebook, Twitter, and its emergency notification system, following suit with Boston Public Schools and numerous local institutions, all of whom called off classes.

BC’s Emergency Management Team provides information and insight to the administrators prior to any major storm. The group helps the University assess the consequences of a decision to close school for the day and examine what precautions must be taken to ensure campus safety.

“The safety of the campus trumps all other decisions,” said John Tommaney, director of emergency management. “If there’s anything we’re concerned is a threat to the campus community, that’s going to take precedence over any other event on campus.”

With the storm approaching, Massachusetts Governor Charlie Baker made an appeal to the public to stay off the roads, which strongly informed the decision to close school, according to Tommaney.

“We are urging the public to stay off the roads,” Baker said in a Tweet. “If you need to go out, please use public transit where possible. Employers are encouraged to let people work from home to keep traffic volume low.”

Tommaney explained that Facilities Management follows an extensive snow removal plan and that its first priority is to keep major access roads on campus, such as Campanella Way and Linden Lane, open in case of an emergency. Its second priority is to keep primary access into residential halls, health services, dining halls, and other frequently used buildings open, as well as prioritize routes for students with disabilities.

Another role of the Emergency Management Team during a University closure is to work with dining halls to ensure that students still have food options. As such, Lower, Carney’s, and Stuart dining halls were open for limited hours, closing at 9 p.m.

Michael Forcier, the managing director of McElroy dining services, said that this storm did not cause nearly as many issues for dining hall staff as previous winter storms have. A sufficient number of cooks, servers, and managers were able to find access to transportation and arrive on time.

Most recently, when Winter Storm Juno prompted a statewide travel ban in 2015, dining hall employees were prevented from returning to their homes and forced to sleep on portable air mattresses in spaces across campus.

But with Tuesday’s storm, members of the BC dining team may have just had to arrive to campus earlier than usual to prepare for the day.

Various on-campus dining halls, such as Eagle’s Nest and the Rat, had to close because there were not enough on-site staff members. Extensive foresight and preparation by BC’s dining services in addition to its  staff’s dedication, however, allowed it to overcome these obstacles.

“[The staff] comes in, and they’re dedicated … and our student body often appreciates it,” Forcier said. “We’re here for long hours, and we really value when students come and say thank you. I think that’s why a lot of people are passionate about working here.”

Shuttle services were also suspended on Tuesday, but one van servicing both the Commonwealth Avenue and Newton Routes was running. O’Neill was the only library that remained open, for regular hours with limited services, and all campus recreation facilities and programs, in addition to a number of parking lots, were closed due to the storm.