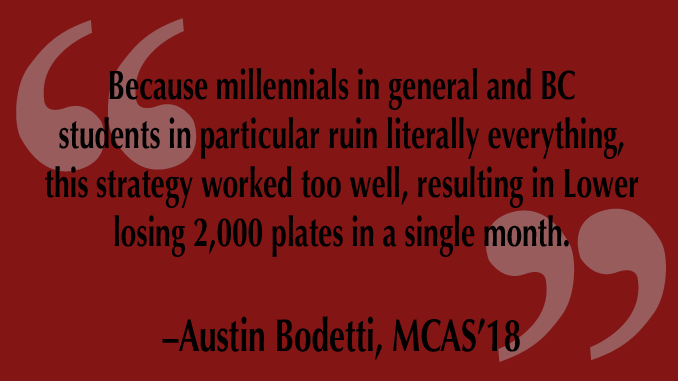 Addressing the Great Plate Caper of 2016

Back in my junior year, when I couldn’t grow facial hair—to be fair, I still can’t now—Boston College managed to lose 2,000 plates from one of its dining halls, Corcoran Commons, or, as the youths like to call it, “Lower.” Granted, BC loses things all the time, such as any football game ever and all its rivalries with Boston University, which is actually in Boston. Still, I struggled to comprehend that number—and not just because I had almost failed math core. “How could BC lose 2,000 plates?” I wondered while stroking my stubble. “How many plates did it have to begin with?”

When I sought advice from my lover friend Chris Reynolds, known to fans of my country-spanning comedic email list as “Krispy Kreme,” he encouraged me to solve the mystery in the spirit of my two-part Mattress Firm investigation (1 and 2), which revealed that Mattress Firm’s name, contrary to popular belief, is not a pun. Those columns had given me a reputation as “Mystery-Solving Austin,” The Heights’s only competent columnist. I had to uphold my good name.

Google informed me that The Heights had reported on the missing plates twice, first in October 2016 and again in February 2017. A reputable investigative reporter would have read those articles in full, but reputable investigative reporters get paid for their work, so I just read the first few paragraphs, then texted some sophomores to buy me lunch because I had worked up a sweat. The sophomores declined because no one wants to buy food for a sweaty senior, not even for Mystery-Solving Austin.

My first move was to email Jack Dunn, an associate vice president of something at BC and—as BC proudly states on its website—a man who once got into battle with a movie that won two Oscars and lived to tell the tale. By the looks of it, the Dunnster was my kind of guy.

Rather than answer my email himself, the Dunnster, kind soul that he is, forwarded it to associate director of operations at BC Dining Megan “Meg” O’Neill and Derrick Cripps, whose surname—it must be observed—rhymes with “frips” and whose two LinkedIn profiles refer to him rather ominously as “general manager.” General manager of what? We’ll never know. That’s not our mystery today.

Meg gave me the DL on what my 2.5 friends and I had termed “the Great Plate Caper.” According to her, the tragedy started when BC Dining tried getting students to use plates instead of disposable containers to be environmentally friendly.

Because millennials in general and BC students in particular ruin literally everything, this strategy worked too well, resulting in Lower losing 2,000 plates in a single month. “A very few students took it as a OMG moment, but in reality no one really returned any,” she said. “We were only able to recover by going to the dorms and doing a collection.”

Though BC managed to recover a few hundred plates, my conversation with Meg revealed the existence of a far greater mystery: “We have not implemented a new system though we have losses every year, which is pretty consistent. For example, Corcoran needs to replace over 22,000 metal forks every year. Yes, 22,000! We have brought it up with different student groups every year, though the loss rate is pretty steady year to year. … It is an ongoing struggle for us, and we ask all students to help us.”

“Shit: Who has amassed literally tens of thousands of forks?” I thought when I read that paragraph, given my tendency to swear in my columns to annoy The Heights’s Stalinist censors. I strongly debated calling the A&E show Hoarders to pick up where this column leaves off, but no one deserves to be punished with A&E or—God forbid—TLC. I’m only mildly cruel and unusual.

Meg related that this year, Lower is already missing 1,200 plates. This number is somewhat better than the days of the Great Plate Caper and pales in comparison to the Fork Five-Finger Discount, but still. We can do better. What happened to the good old days when BC students just stole laptops?