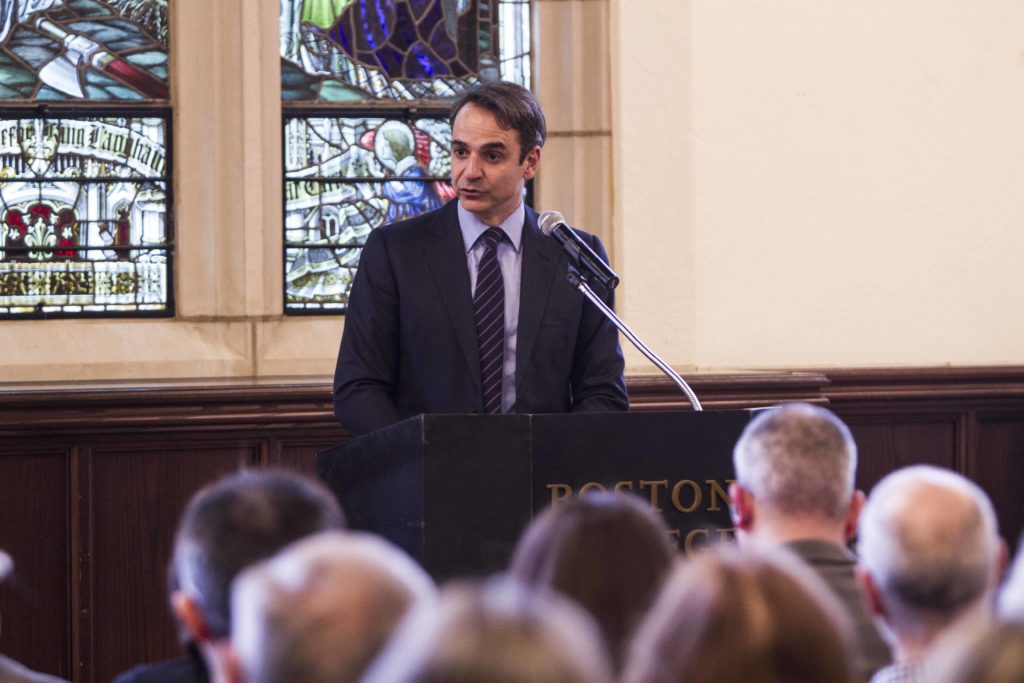 President of the New Democracy party of Greece and Leader of the Opposition Kyriakos Mitsotakis spoke to a crowd in Gasson 100 Monday as part of the Greek America Lecture Series, presented by the Hellenic Society of Boston College.

Mitsotakis, who could potentially become prime minister of Greece, depending on the outcome of the country’s next parliamentary elections, started his speech by pointing out the severity of the economic downturn Greece has experienced over the last eight years—the country lost 25 percent of its GDP, faced increasing social inequality, and saw 500,000 young people emigrate in search of a better future.

Mitsotakis stated that while today his view of the country, which has managed to correct most of the fiscal imbalance that initially caused the crisis, remains optimistic, he holds concern about recent trends of growing distrust towards elites, academics, politicians, and the political system in Greece.

“This breakdown of trust is very worrisome because in order to move the country forward, I think we’re going to need to unite behind a common narrative,” he said.

Regarding economics, Mitsotakis said that if Greece is to achieve its desired growth, it needs a clear plan for doing so—one that is different from that which the current government has imposed on the country. He emphasized the importance of reducing taxes, creating jobs, and promoting an “explosion” of foreign and domestic investment.

“How do you achieve such an investment explosion?” he asked. “First of all, you need a government that is absolutely committed to a reform agenda, who will transform the Greek economy from a closed economy into an open economy, focus much more on exports of tradable goods and on services where Greece has a natural competitive advantage.”

Mitsotakis also emphasized the need for Greece to reform its justice system, take advantage of its tourism sector, and promote agricultural production on a greater scale.

“There are many other sectors where we have natural competitive advantage—logistics, for example,” he said. “We are an entry point for trade in the East, but also from the South—big opportunities that I think people can leverage. But again, there’s a big precondition for all of this, and it’s … trust.”

Mitsotakis stated that Greece needs to demonstrate to the international community that it will deliver on its reforms. If it does not do so, the next government will be faced with increased borrowing costs, which would be risky for the country.

According to Mitsotakis, however, economic growth in and of itself will not be enough for Greece, as the crisis was a failure not only of economic policy, but also of institutions. He expressed his concern with populism in Greece, stating that populists build alliances with powerful oligarchs who help them control media the outlets, use the media to attack their political opponents, and do not respect the branches of Greece’s government.

Mitsotakis said that building stronger institutions would be of great importance to the future of the country and noted that Greece’s main center-right political party, New Democracy, will place institutional issues at the center of its agenda.

Specifically, Mitsotakis said that Greece needs to amend its constitution to adapt to the country’s current needs, put in place a performance assessment system for members of the civil service, improve its public universities while lifting the constitutional ban on private ones, and, finally, emphasize the application of the rule of law—referencing to an incident Sunday in which a Greek oligarch stormed a soccer field with a gun because he disagreed with a referee decision to demonstrate the importance of the last point.

“These things happen in other types of countries—they don’t happen in Western democracies,” he said.

Finally, Mitsotakis discussed his third priority, addressing Greece’s geopolitical opportunities, by first stating that Turkey, as an unpredictable, nervous regional power, is no longer a reliable U.S. ally, and that Greece should be the reliable partner for the United States in the region.

“There is an opportunity for Greece to upgrade its geopolitical status now that many of the traditional alliances in the region are unraveling,” he said.

He also emphasized that because Greece has close ties with Israel, functions as an entry point for international trade, and remains a powerful force in the Balkans, the country has a role to play in the shifting geopolitics of the region.

“I remain fundamentally optimistic about Greece,” he said. “We have gone through a crisis that would have destroyed other countries, yet we persevered.”

“A lot of the hard work is behind us … but there’s still a lot of work that remains,” he said. “And I hope, and this is my personal aspiration, that I will have the privilege at some point after the next election to lead Greece into what I consider to be a very bright and promising future.”