Home » Will Supple: An Eagle on ‘Idol’ 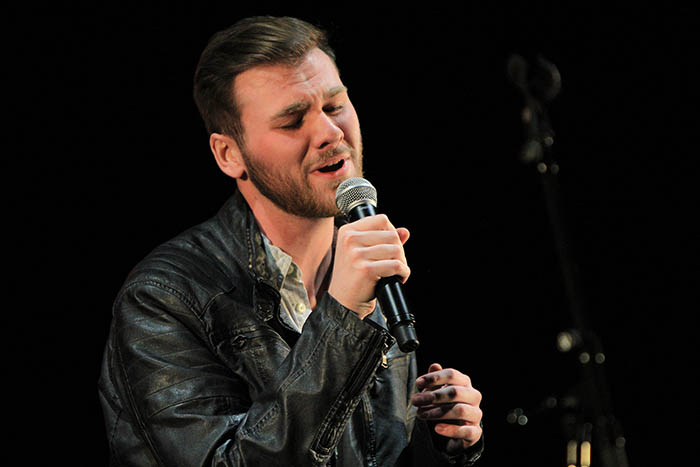 Will Supple: An Eagle on ‘Idol’

Right now, if you take a look at Will Supple’s, MCAS ’20, Twitter account (@willsupplemusic), it’s a pretty fascinating study in how weird it is to go from being a talented singer involved in The Bostonians to an American Idol contestant.

“a video with my face in it has OVER 12 MILLION VIEWS!!!!!! welcome to my actual peak in life it’s a pleasure to have you here,” his latest tweet reads.

Then, Supple @’s Katy Perry. Just an average day in the life of the Needham, Mass. native. He has to carefully create Instagram stories as his upcoming appearance brings him more and more publicity.

Just three years ago, he couldn’t have imagined he would ever be in this position.

“I have always been singing, but never really for an audience,” Supple said. “It wasn’t until my senior year of high school when I was in Guys and Dolls and I had a solo that went well.”

He played Sky Masterson, a gambler who sings “Luck Be A Lady.” His performance was so good that as Supple began applying to college later that year, he was encouraged by his peers at St. Sebastian’s School (where I was also a student) to send in a sample of his solo.

When he was younger, Supple was a part of a few musicals, but those were the only performances he gave in front of an audience. Music was always a part of his life, but more in the sense that he sang in the shower, rather than onstage to adoring audiences.

Guys and Dolls was the beginning of a new chapter. After gaining some a cappella experience at St. Sebastian’s and as Supple transitioned to BC, he knew based on his newfound excellence on stage that he wanted to keep singing in college.

“I came to BC, and I knew I wanted to be in an a cappella group, so I got into The Bostonians,” Supple said. “And once that happened I was singing three times a week, which was more than I had ever really done before. And all of my best friends at school were singers because that was who I was around all the time, and I got better from doing it all the time.”

By the time Sing it to the Heights came around in 2016, Supple had gained a lot of voice reps. He had begun taking singing lessons at the studio where he recorded his voice tape, he had the musicals under his belt, and finally his work with The Bostonians had sharpened his singing ability to the point where he felt ready to try his hand in the BC competition which was formerly named BC Idol.

“It’s weird how many talented kids we have at this school considering we don’t have a music pedigree, so I knew it would be competitive to get into one of the groups, and I thought The Bostonians were the best group. I was really excited when they took me. But that was my real first validation that I was good enough to get in that group.”

He cited the tours The Bostonians go on as the highlight of his time with the group.

“We go on tour every year, and that’s always a blast, just a lot of singing at other colleges and different cities—we went to Canada my freshman year and it was a lot of fun, a lot of group bonding,” he said.

He cited a trip to Cape Cod as one of his favorite moments as well, but he had some reservations.

“One time we went on retreat in Falmouth, Mass., and we were all sitting on a ledge by the water,” Supple said. “And the sunset was the most beautiful sunset I’ve ever seen, and it was the most special moment. That’s so sappy though.

“Just make it up honestly.”

Throughout the process of trying to make it onto American Idol, Supple made an effort to keep things light. He saw countless people understandably losing their minds over the pressure of performing for Idol producers, so no matter what stage of the process he was at, Supple did his best to try to ease the fears of his fellow auditioners with his humor—partly because he felt bad for them, and partly because it was the only way for him to not lose his own.

Supple fell back on his previous experience when reflecting on how he wound up auditioning. Winning Sing it to the Heights served as his second validation.

“Sing it to the Heights was where I think things really started,” he said. “I knew I wanted to audition for it—that’s still the largest audience I’ve ever sung in front of, which is weird because I’m about to be in front of millions of people, but whatever, it’s, like fine, everything is great, and it’s like 500 to like 13 million, WHATEVER. Is that even a jump?”

He auditioned for Sing it to the Heights with “Forrest Gump” by Frank Ocean and then went into Chris Stapleton’s “Tennessee Whiskey,” and aboslutely knocked it out of the park.

“It’s one of the best performances I’ve ever had—I don’t think I’ve ever sung it as well as I did there,” Supple said. “I won that, which was based on an audience vote, and that was just validating. And my best friend, who is also in The Bostonians, came in second, and she killed it. So to win something like that as a freshman in a competition for all grades in my first solo performance was an important moment.”

It would appear that after his win, Supple was on top of the world, primed to jump to a new musical stratosphere. Unfortunately, that isn’t exactly what happened.

He struggled with trying to figure out what was next for him. He took a semester off from BC, worked at his craft, and then upon his return this fall, he came across the Facebook posts that inspired him to head for the city. Supple didn’t even know about the Idol auditions, but as he scrolled through Facebook, he saw friends skipping work to go and try to live their dreams.

He figured he should give it a shot. Supple waited for hours in line, watching plenty of talented vocalists get cast aside because this was American Idol—this was the big leagues.

So when his time came, Supple had two goals: sound as good as possible, but also come across as interesting. He realized that this was the show that made Kelly Clarkson famous. They had seen plenty of talented singers, but this was a reality show. In order to make it to any stage of Idol, he needed to stand out not just with his voice but with his personality.

This is where the intrepid author of this article could’ve predicted what was coming. I was in a LOT of plays with young William from 2009 to 2014 when I graduated, just a few months before he began to fully understand how talented a singer he was and how passionate he was about performing. Will Supple has never failed to stand out. His humor is biting—on countless occasions our conversations have devolved into mocking our peers, our teachers, ourselves, and everything in between. That was no different during this interview, when we rehashed countless memories in the midst of celebrating Supple’s ascension to the point where he could, when I asked him for an interview, direct me to his PR representative.

“I’m really glad that I didn’t know that the auditions were happening until the day of, so I didn’t have time to prepare or psych myself out,” he said. “There were a bunch of people before me—some of them were terrible, some of them were AMAZING, pretty much everyone was getting told ‘no.’

“So I was just standing there thinking ‘I really have nothing to lose. I might as well just do what I can.’ Some guy who worked as a security guard came over and said the best advice he could give was to make a ton of eye contact with the producer. So I literally just stared at this man while I sang three songs to him.”

Supple sang “Tennessee Whiskey,” “So Good” by Johnny Stimson, and “Golden Slumbers” by the Beatles. He put down as his fun fact that he could quote Mean Girls from start to finish, and less than a month later, he found himself in front of the celebrity judges in New York City.

“I tried to keep my personality on. It’s more than a singing competition,” he said. “They’re casting for a reality show, so if I’m boring they won’t want me.”

Supple is featured in one of the promos for the show, talking about his and Katy Perry’s talents—his personality is just as much of a reason he made it to the celebrity judges as his tremendous talent.

As for how the audition went, Supple was predictably blown away by the experience.

“As soon as I walked into the room, there were so many lights, so many cameras, three of the most attractive people I have ever seen sitting in front of me,” he said. “And I was just like—knowing that everything that is filming me could be seen by the entire country—all that literally hit me my second step into the room.

Supple didn’t sing either of his songs quite as well as he had hoped, but he thinks the unique tone of his voice made a huge difference, showing off his potential.

In order to find out how he did and what the celebrity judges thought of him, though, viewers will have to keep tuning in to the show Sundays and Mondays on ABC. Regardless of how he does, Supple is planning on moving to Los Angeles and getting into the music industry at any level, with this experience serving as the inspiration for him to go into one of the toughest industries in the world.

He’s come a long way from the kid I knew roasting my existence as we navigated all-boys-Catholic High School Musical and the insanity that comes with that experience, but Will Supple has put in the hours and proved to some of the most renowned talent producers in the country how good he is. Although he couldn’t have imagined being on American Idol just a few months ago, it’s readily apparent why he’s gotten so far on Idol.

Supple’s passion for music has brought him this far—it’s what will fuel his efforts on Idol too.