Home » Activism in Wake of Shooting Should Translate to College Campuses 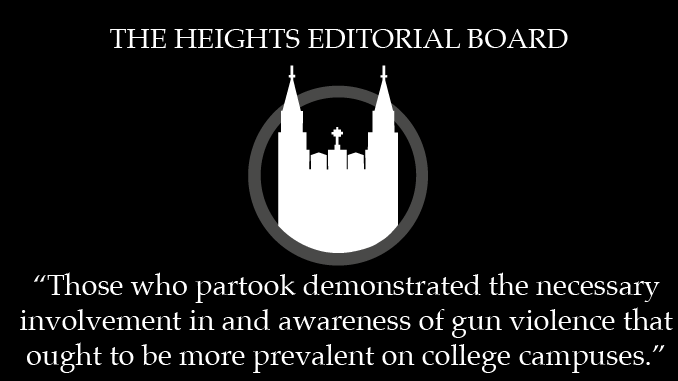 Activism in Wake of Shooting Should Translate to College Campuses

Boston Public Schools were closed on Wednesday, but students remained active nonetheless. In solidarity with the 17 victims of the shooting at Marjory Stoneman Douglas High School in Parkland, Fla., thousands of high school students across the country walked out of their classes for 17 minutes at 10 a.m. local time. Although two feet of snow could have hindered demonstrations in the Northeast, hundreds of students in Massachusetts proceeded to march to the State House to contribute to the national march for stricter gun control legislation. Their persistent action demonstrates not only the students’ maturity and recognition of nationwide issues, but also the responsibility they have assumed by displaying their displeasure with local politicians as they address such a serious issue.

At Boston College, about 50 students and faculty members participated in an organized walk out on Wednesday. Those who partook demonstrated the necessary involvement in and awareness of gun violence that ought to be more prevalent on college campuses. In the wake of the recent tragic shooting of a BC alum, the University’s new, personal connection to this conflict suggests that the BC community should prioritize dialogue among students and faculty surrounding issues of gun violence in institutions of higher education. Furthermore, similar incidents involving gun violence have occurred on college campuses that ought to have incited responses parallel to the thousands of high school students across the country: In 2007, a gunman at Virginia Tech killed over 30 students and faculty members, prompting the third-deadliest shooting in American history. Such acts of violence are not removed from institutions of higher education, and students should be more aware of the dangers of gun violence on college campuses. Additionally, more college students ought to follow in the footsteps of their high school peers in taking action after recognizing these issues.