Significant changes in the world of copyright law, as it pertains to music, have not been made since 1998. That’s a lifetime for me—and a lot of things have happened since then. Harry Potter and the Prisoner of Azkaban came out, and later Harry Potter and the Goblet of Fire became the fastest-selling book in history, Jimmy Wales and Larry Sanger launched Wikipedia, the iPhone was released, and the term “google” was introduced as a verb into the Oxford English Dictionary. Societal turning points are around every corner with the prevalence of technology—however, a few things have stayed in the past. Congress has always had an “all talk, no action” stigma, but music copyright law and the intellectual property debate has been dragged on for far too long.

The last law affecting the music industry was the Copyright Term Extension Act, or the Mickey Mouse Protection Act, which was signed by former President Bill Clinton in 1998. The act essentially locked copyrighted items (including, you guessed it, Mickey Mouse) down until they can be released into the public domain in 2024.

The Music Modernization Act (MMA), introduced to Congress as a bill in January by a group of legislators led by Senators Orrin Hatch (R-UT), Lamar Alexander (R-TN), and Sheldon Whitehouse (D-RI), seeks to streamline music legislation in consideration of today’s dependance on streaming services. The MMA would ensure the fair payment of musicians whose songs are available for streaming or purchase online. The laws that currently control music consumption, royalties, and copyright were all penned before anyone could even imagine the idea of Spotify. With the introduction of MMA, the music industry would be met with contemporary licensing laws that are up-to-date with the practices of current music consumption.

This would be the first piece of legislation written with the best interests of the songwriter in mind. In recent years, streaming services have filed countless Notices of Intention (NOI) in order to legally stream music without ownership information. Because of this, songwriters are losing millions of dollars because they are not getting recognition, and subsequently, compensation. With the MMA, not only will they receive compensation, but all royalties are set to increase to a fair-market value (by about 44 percent).

Some supporters of the cause wish to combine the MMA with two other pieces of related legislation, the CLASSICS (Compensating Legacy Artists for their Songs, Service, and Contributions to Society) Act and the Allocation for Music Producers (AMP) Act. The CLASSICS Act refers to one of the industry’s most dire predicaments—artists who recorded music prior to 1972 do not get paid royalties when their music is played on digital radio. There are entire radio stations devoted to music from previous decades (’60’s on 6, anyone?), meaning that these stations get by without paying artists royalties at all. The AMP Act includes music producers, engineers, and others who are crucial in the process of making modern music (but were not very prevalent in previous decades) in copyright law. With this act, they will receive the royalties and protection they have worked for and will be treated as equal to the artists whose names are on the album cover.

Upwards of 26,000 songwriters have endorsed the MMA, and 240 legacy artists have backed the CLASSICS Act. The Digital Media Association, which represents Apple, Microsoft, Spotify, and Amazon, among many others, is also on board. In addition, the National Music Publishers’ Association, alongside prominent songwriting groups such as ASCAP, BMI, and the Nashville Songwriters Association International have also supported the MMA.

I know this packed in a lot of statistics that may have flown over your head, and even then I’m still painting with broad strokes. However, it is crucial to consider the effects of your music consumption on the industry itself. Of course, Congress has bigger things to debate—but nobody can deny that this issue affects every single one of us. Everytime we jump in the car and turn on the radio, open Spotify on our phones, watch a YouTube video, or even buy a song from iTunes (which would be considered old-fashioned today, even though it was unheard of when the current legislation was passed), this issue stays alive. Royalties, copyright, and consumption all pierce our lives in countless ways (when royalties increase, quality of music often does as well). Hopefully, Congress will follow through with this bill and continue to support the arts as they evolve in a quickly changing digital age. 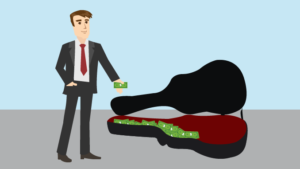