Practically all season, Daryl Watts, Caitrin Lonergan, and Toni Ann Miano made a home for themselves inside the nation’s top-15 scoring ranks. The American Hockey Coaches Association took notice. On Thursday night, the three Eagles were named to AHCA All-American Teams, marking only the second time in program history—and the first since 2015-16—that a trio of BC skaters have earned the top-tier accolade in the same season.

Watts earned a spot on the First Team, while Lonergan and Miano were selected to the Second Team, upping the Eagles’ all-time All-American total to 15.

A top-three finalist for the Patty Kazmaier Award, Watts recorded 42 goals and 40 assists this year, totaling 82 points. To put that in perspective, only five other players this decade have logged more points in a single season. The freshman not only leads the nation in scoring, but also tops the charts for both goals and power-play goals.

Her partner-in-crime, Lonergan, wasn’t too far behind. Any other year, the sophomore could have had a shot at the nation’s scoring title. But, in a way, Watts paced Lonergan’s breakout campaign. The Roslindale, Mass. native recorded twice as many goals as she did a season ago and more than doubled her assist total, notching 75 points on the year—42 more than she posted her rookie season. Lonergan etched her name into the box score in 35 of BC’s 38 games this season, logging 25 multi-point games in the process.

The sophomore was especially lethal on special teams. Lonergan—the nation’s assist leader—led the country in power-play points, scoring nine goals and setting up 16 others on the one-man advantage. Above all else, she had a knack for lighting the lamp when it mattered most: The forward tabbed eight game-winning goals, the most in the nation.

That leaves Miano—the Eagles’ lone upperclassman to earn the distinction. With the accolade, the senior extends the program’s four-year streak of having at least one All-American blue liner. Miano, the unanimous selection for Hockey East’s Best Defenseman, set a new career high with 43 points this season, matching her scoring total from the past two years combined.

Recording 18 goals and 25 assists, she’s currently ahead of all other Division I defensemen in scoring. Miano’s shot percentage reached an all-time high, clocking out at .153, not to mention that her + 44 plus/minus is good for sixth in the country.

BC’s season came to a screeching halt last week, as the Eagles lost back-to-back games for the first time all year, falling to No. 6 Ohio State in the NCAA Tournament Quarterfinals. But BC isn’t quite done yet, at least not with the accolades portion of the 2017-18 campaign. Watts still has a chance to leave Minnesota with a trophy in hand. Not the National Championship she and her teammates were looking for, but a pretty close second—the Patty Kazmaier Award. 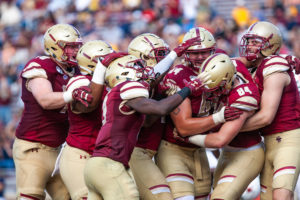