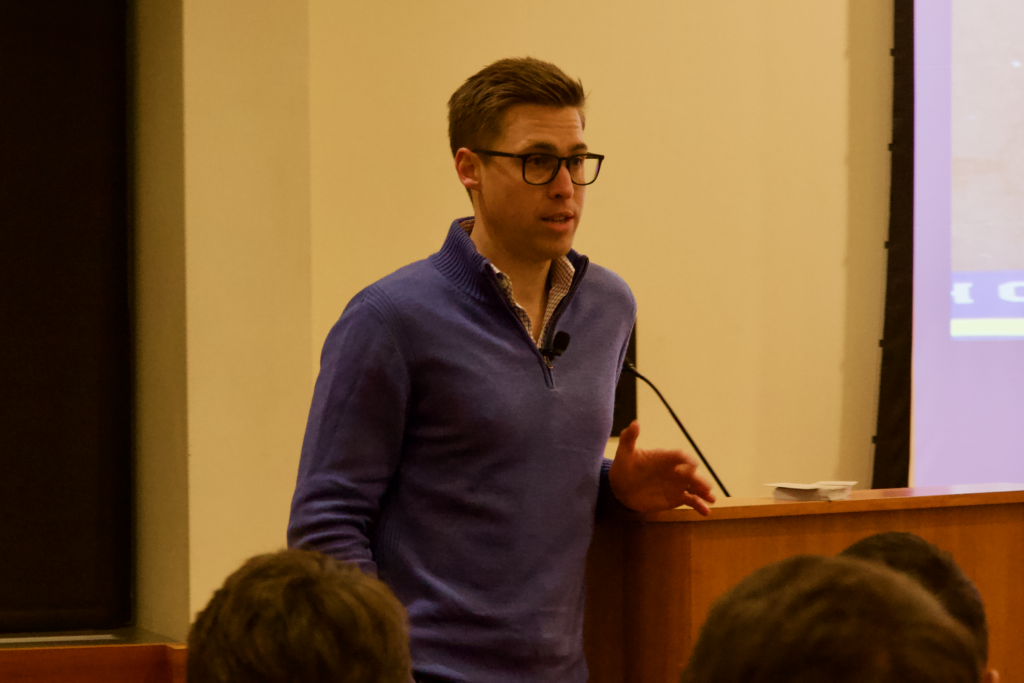 Patrick Downes, a Boston Marathon bombing survivor and BC’05, gave the Ignatian Society’s inaugural AMDG (ad maiorem Dei gloriam) Lecture on Monday night. The event will now be held annually, with the goal of inviting “a speaker who—in word and deed—truly embodies the spirit of the Jesuit mission,” according to its president Bobby Hally, CSOM ’19.

Downes’s lecture focused on the revelations and reflections he has undergone since the marathon bombing five years ago. While he had an idea of what living a Jesuit life meant before the bombing, he came to fully and powerfully understand the meaning of the Jesuit ideals through the tragedy and his encounters with a variety of people following it.

He began his talk by analyzing a photo from his engagement shoot with his wife Jessica Kensky, which served as a reminder of how life was before the bombing. Downes recalled how free their lives, bodies, and relationship were back then.

“We’d popped out of bed that day… with… no medical devices,” Downes said. “We didn’t need to help each other get ready for the day. We bounded down four flights of stairs … to meet our photographer and spent hours walking around the square taking pictures, never running out of energy or feeling pain in our bodies. It was a really special time for us.”

This sense of freedom and boundless energy would forever be lost on April 15, 2013, when the bombs went off on Boylston Street. Downes said that the bombing showcased humanity’s capacity for extreme hate, but also extreme love.

“These two guys took days or weeks or months to plan out this one instance of hate: that one moment when those bombs went off and killed three people and injured hundreds,” Downes said. “In the split second after that, all these people rushed toward us without any planning or any premeditation. In fact, some who rushed toward us were veterans, who [knew that] when one bomb goes off, there’s likely a second—which there was—but they ran toward us anyway: total selflessness.”

He remembered the many people who helped him through the long and difficult recovery process, including doctors and fellow patients at Boston-area hospitals and the Walter Reed Medical Center, and fellow victims of the bombing. He and Kensky found that everything that had once been so easy and automatic now took immense amounts of time, energy, and focus.

“About two weeks after the bombing, Jess was stable enough to come visit me for about an hour or two,” Downes said. “I needed all these people to help bring her into my room, rotate her bed, bring her next to me so that I could touch her and kiss her—very different from the first picture I showed you of us in Harvard Square.”

These difficult experiences helped Downes and Kensky to develop a strong bond with fellow victims. He felt particular attachment to the “Boylston Street family” of Marathon bombing victims. As he expressed deep gratitude for his support group, he called on his audience to be the support for those who need it.

“They were all telling me—and all of us—that they had our backs, they cared about us … I don’t know what I’d do without them,” Downes said. “And … I think about someone who’s going through … trauma and tragedy by themselves … do they have that kind of support? Is there a slogan their city has rallied around? Is there a shared sense of meaning about what their injuries represent? Is there a fund of millions of dollars to support their medical care? A lot of cases, no.”

Along the road to recovery, Downes also realized the exclusion from society disabled people face. When the Boston Athletic Association, which organizes the Boston Marathon, attempted to bar Walter Reed veterans from handcycling the marathon, Downes wrote a Boston Globe op-ed in which he cited the new perspective he had gained from his experience with fellow victims and patients at Walter Reed to advocate for allowing the veterans to participate.

“They’re excluded from coffee shops … housing … and races… because we don’t feel comfortable around them,” Downes said. “They make us uneasy. I love these guys … for everything they’ve been through … how they look now… their resilience in the face of all this stuff. And I think anyone would love them if they had the opportunity to understand them and to know… and appreciate their stories.”

The severe injuries Downes and Kensky suffered required them to find new ways to love and celebrate their bodies. Despite the changes, Downes remained grateful for having been able to complete the marathon, which he and his wife did by handcycle a year after the bombing.

He admitted that obstacles remain. While the couple did not suffer injuries preventing childbearing, their injuries raise doubts about the feasibility of raising a child. They will, however, remain actively involved in the lives of kids. Downes is a godfather, Kensky is planning to become involved health care again, and the two have written a children’s book, spoken at schools, and interact with kids on a daily basis in the city. And with the various support groups they have become a part of along the way, Downes and Kensky know they will always be surrounded by those who love and care.

“Love and belonging and our responsibility for one another have incredible power—way more powerful than hate will ever have,” he concluded. “These last five years have taught me what it means to really be a person for others: It may sound initially like a tagline … but once it’s put into action, it’s the most powerful thing I’ve ever seen.”