Home » ‘You Were Never Really Here’ Is A Mesmerizing Exploration of Trauma and Memory
Arts, Movies, Review

You Were Never Really Here sounds less like a movie title and more like an assertion, and Lynne Ramsay’s latest is often as ephemeral and confident as its title suggests. Dizzyingly oblique and brimming with violence, the film takes place in a New York we rarely see anymore, occupying the few remaining neighborhoods that recall the pre-gentrified mean streets of the 1970s. Joe (Joaquin Phoenix, always great), a burly hitman and former soldier, deals with his PTSD by lumbering aimlessly throughout the city and occasionally rescuing missing girls—usually by bashing in the heads of their abusers. With the job comes a great deal of baggage, and Joe has been carrying his for far too long. Dissonant images of traumatic agony flash across the screen without context, placing us in the liminal headspace of our protagonist. Given his past, we see Joe contemplating suicide—he suffocates himself with plastic bags and often imagines jumping in front of moving trains—and the only thing that keeps him from ending it is the vague hope of redemption.

To borrow from Samuel Taylor Coleridge, Joe is the embodiment of Life-in-Death: a walking contradiction. He’s a sturdy, muscular man with a crumbling psyche, a brutal man with the propensity for great tenderness, and a precise killer who’s often distracted—a dead man walking. Joe is given an assignment to rescue the daughter of a man running for the New York Senate, and the rest of the film finds him amid a convoluted child-trafficking conspiracy. Yet, the film’s selling point isn’t necessarily the story, but rather the way in which it’s told. You Were Never Really Here embodies—for lack of a better term—an uncompromising punkish attitude. What I mean is that the film eschews expected narrative elements and exposition for expressive camerawork and a hypnotic atmosphere—not unlike the Safdie’s Good Time from 2017.

Even the production of You Were Never Really Here reflects this punk attitude, as Ramsay filmed it over the course of a few weeks on the streets of New York and Brooklyn, writing the script on the fly and shooting improvisationally. The film was shot and edited in a frenzy (allegedly, it was still being edited days before its Cannes premiere), and the end result is all the better for it. The film’s ethos reflects this frenetic energy with its breakneck pace and quick cuts that slice through all the clutter. Incidentally, Jonny Greenwood composed the music for this film, and his synthy score works perfectly in tandem with Ramsay’s evocative images. Like his score for The Master, the discordant strumming and syncopated beats of Greenwood’s compositions intend and achieve to reflect Joe’s disturbed psychological state.

The distinct brand of psychological disturbance on display here should be no surprise to those familiar with Ramsay’s other work (We Need to Talk About Kevin, Ratcatcher, Morvern Callar). The violence in the film arrives unexpectedly and ends even quicker, but its repercussions weigh heavily on the characters—especially the Nina (Ekaterina Samsonov), the girl Joe sets out to save. Like Ramsay’s other films, You Were Never Really Here depicts of the sudden and abrupt loss of innocence, and Ramsay underscores this point by pairing some of the more grotesquely violent scenes with doo-wop music from the sixties, like the song “Angel Baby” by Rosie & The Originals. Of course, this sort of uneasy juxtaposition helps tacitly evoke these innate themes and ideas.

Many critics have and will continue to discuss this film in relation to Martin Scorsese’s Taxi Driver (psychotic-protagonist-drives-around-New-York-at-night-and-decides-to-save-a-young- girl-in-an-effort-to-save-himself), for their evident thematic and narrative similarities. Some may even view this a pretentious rip-off, and that’s okay (if not a little reductive). But as with anything else, films ought to be observed within a given context, and there’s a reason Ramsay chose to make this film at this time. In many ways, You Were Never Really Here engages in dialogue with the films of the disillusioned 70s, creating a bond between these two eras separated by almost fifty years. Politicians can’t be trusted, everything seems to be a conspiracy, and both films share a concern that the next generation will bear the brunt of these societal evils. Travis Bickle fought in Vietnam, and Joe fought in the Middle East. Not much has changed because history is cyclical, and Ramsay knows this. After all, the film’s elliptical narrative embodies the pervasive trauma buried within our collective conscious. 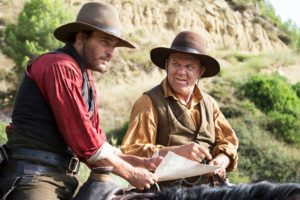