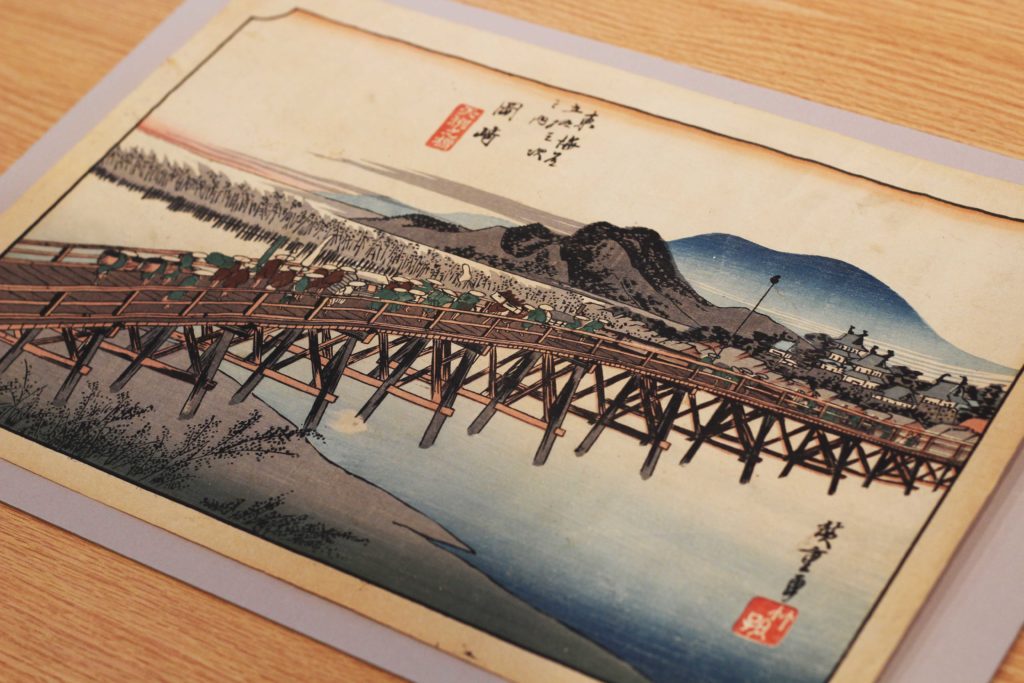 On Thursday, Boston College’s McMullen Museum of Art showcased 18th- to 19th-century Japanese prints and paintings taken from its permanent collection of 3,000 art objects. Led by museum curator Diana Larson and her three assistants, the event, Into the Collection: Japanese Works on Paper, provided a vast wealth of knowledge on the “ukiyo-e” genre. Translated into “pictures of the floating world,” ukiyo-e illustrates the hedonistic lifestyle that proliferated during the Edo period. From depictions of beautiful courtesans and prostitutes to panoramic mountainscapes and vistas, the exhibition covered a broad range of cultural artifacts evocative of serene atmospheres.

Ukiyo-e was incredibly popular among Japan’s then-emerging merchant class. While the artists were responsible for designing the artwork, a carver cut the design into woodblocks, and the printer made impressions of the woodblock on paper. Many ukiyo-e printers created a separate woodblock for every color and then imposed the colors on top of one another—a technique referred to as “nishiki-e” (“brocade”). The method represented a large step forward from previous methods that only enabled greys and monochromes.

The first work presented was by the woodblock artist Katsukawa Shunshō. Formatted according to the “pillar-print” style, which measures 70 centimeters by 12 centimeters, the work depicts a woman holding a fan looking onto a harbor outside of her window. The way the woman ties her “obi,” or sash, signifies she is a prostitute. That the piece is set in Yoshiwara, Edo’s red-light district, also alludes to this fact. The ships in the distance are possibly her clients. Characteristic of ukiyo-e are the strong, flat bold lines, vertical versus horizontal relationships, asymmetry (for example, Shunshō crops half the body of the woman from this woodprint), and serpentine postures of beauty.

The next piece, by Torii Kiyonaga, depicts two prostitutes, a girl who is their protege, and a servant carrying a box. That the box’s inscription says it holds a doll suggests to the viewer that the four are going to the doll festival that was held every year on March 3. The Japanese during this period strongly believed that dolls had souls and would attend shrines and special services for returning the doll to heaven. A master of the “bijin-ga,” images of courtesans and other beautiful women, Kiyonaga illustrates the scene with a remarkable play of light and dark, strong lines, and flattened spatial dimensions.

Kitagawa Utamaro was born in 1752, significantly later than his contemporaries Shunshō and Kiyonaga. Due to the sheer volume and versatility of his work, having produced over 2,000 known prints, Utamaro is considered the most important master of the woodblock print. Beyond the scope of Japan, he was also hugely influential to European artists of the period—such as Claude Monet, Paul Gauguin, Henri de Toulouse-Lautrec, and Mary Cassatt. The one-panel strip that was presented conforms to the “okubi-e” style, portraits showing only the head of the figure. In this case the subject is a “wakashu,” a young boy exiting childhood to take on an apprenticeship—also commonly referred to as the “third gender”. The wakashu plays a string instrument called the “shamishan,” though only a portion of this unique and aesthetically pleasing instrument is visible.

The demonstration then progressed on to the 1800s, when ukiyo-e artists began emphasizing natural landscapes. On display was Rose Fuji, a work by Hokusai, the illustrator of what is perhaps the most recognizable piece of Japanese art in the world, The Great Wave off Kanagawa. The piece in question was part of Hokusai’s Thirty-six Views of Mount Fuji, an immensely popular series of prints that depicted the great summit from a multitude of breathtaking angles. Influenced by works from Holland, Hokusai brought newness to an old symbol by seeding people, temples, and actions around the stereotyped mountain. The piece’s blistering red color schema is genuine: When viewed at dawn during late summer, the mountain explodes into the rose of the title.

The final print exhibited was print 39 of a collection of landscapes by Hiroshige titled The Fifty-Three Stations of Tokaido, considered the last great master of ukiyo-e. Hiroshige depicts a bridge spanning the Yahagi River, the longest bridge (1,248 feet) on the Tokaido Road—one of the main travel and transport roads between Kyoto and Tokyo. In the distance is the Okazaki Castle, part of a flourishing cattle town. Along the bridge walks a daimyo procession, consisting of the feudal lord and his entourage—the daimyo’s landholdings would have determined the number of people in attendance.

If there was any work that conveyed the most about cultural norms in Edo Japan through the most economical means possible, it was undoubtedly this last painting by an unknown artist. Tiny details like the presence of eyebrows on the courtesan reveal she is not the mother of the child in the painting—mothers shaved their eyebrows after giving birth. Butterflies, featured in the painting, were associated with metamorphoses and transformation, especially with young girls undergoing puberty. A yellow yamabuki flower, which only blooms in late summer, gives a specific time to the painting. The painting is imposed over a cloud-patterned textile that folds into a scroll. Even the manner in which one ties the scroll is specific, doubling back the rope to create a little loop.

mcmullen museum into the collection: japanese works on paper ukiyo-e
Across the Pond and to the Pulpit
Isabella Stewart Gardner Museum Hosts RISE, Strengthens Music Community in Boston