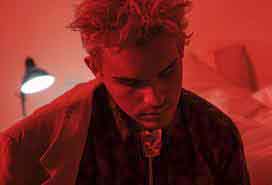 Carlos Vara features his debut single “Numb” in his latest music video, and in it, the 20-year-old pop-soul, singer-songwriter brings his best. The video has an undeniably moody aesthetic and integrates the song’s musical content seamlessly with the accompanying visual. What’s more, Vara’s emotive personality shines throughout the track, and the video uses nuanced imagery to keep the scene engaging.

Most of the visual centers on Vara reeling from his emotional turmoil, writhing around on his bed as the poster child for angst. There are numerous shots alternating between Vara lying around lifelessly and Vara whipping blankets, pounding his hands on his nightstand, thrashing with a fervor, and pouring more drink refills. What’s more, the song manages to demonstrate how an excess of emotion can feel more like the numb absence of it. As he sings about the overwhelming and subsequently numbing effect of his relationship insecurities, Vara embodies the distraught sentiment of the song.

The near-constant red light washed over the frame dramatizes the scene, making the visual appear more tortured and passionate. On occasion, the lighting flickers, and the room flashes between red and steel blue. The effect increases the borderline hysterical intensity and perfectly complements lyrics like “What you do to me is criminal,” where the visual looks like flashing police lights. The video also repeatedly overlays frames onto the main picture, so that two or three different images are present onscreen at the same time. Presenting Vara doing a few different things simultaneously makes the emotional impact of the song seem more inescapable and overwhelming.

The video also stays away from the formulaic, conventional music video structure. Gone are the cyclical transitions to spectacular places that show the artist in a myriad of flashy outfits. In this video, Vara never leaves his bedroom. Keeping the song in one space makes the video seem more organic, as if viewers are witnessing this outpouring of emotion in its natural habitat. It also allows the space to be explored in-depth and presents Vara everywhere from fitfully lounging along his wall to brooding as he stares out and leans against his floor-to-ceiling window. Overall, the spectrum of emotion and its spot-on portrayal makes Vara’s “Numb” video an enjoyable, if not heartbreaking, visual experience.