Home » No. 12 Clemson Relegates Eagles to Bottom of ACC Standings With Sweep 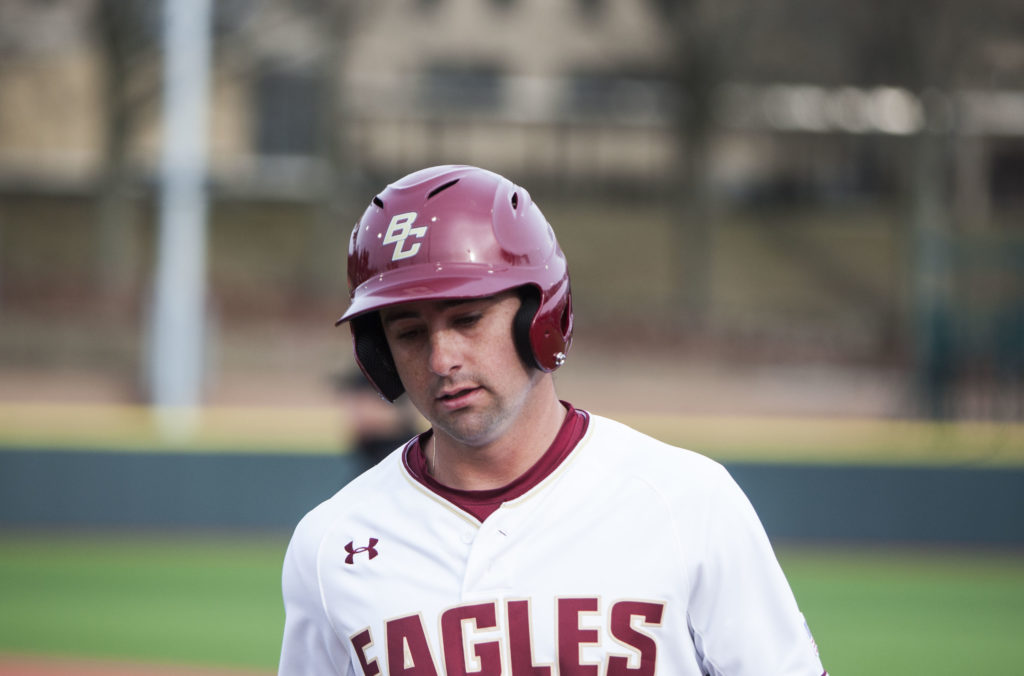 No. 12 Clemson Relegates Eagles to Bottom of ACC Standings With Sweep

Boston College baseball traveled to South Carolina over Easter Break with hopes for a momentum-building, season-changing series against Clemson. Unfortunately, the Eagles couldn’t manage a single win as they were outscored, 27-9, over the course of the three-game set, capping off a dispiriting week in which they also fell to Connecticut at home.

The Saturday finale was, in many ways, representative of the series. The Eagles found themselves in a hole immediately and, though they managed to mount a rally, were ultimately unable to find enough timely hits—dropping the last game of the series, 8-3.

No. 12 Clemson (22-6, 8-4 Atlantic Coast) opened the scoring gates in the first inning. Logan Davidson singled up the middle off Eagles (9-16, 4-8) starter Brian Rapp to lead off the game, advancing to third base on a passed ball and then a wild pitch. Seth Beer drove in Davidson with a sacrifice fly to right field, before consecutive doubles from Patrick Cromwell and Chris Williams gave the Tigers an early two-run lead.

The Eagles responded in the second and third—cutting into the gap initially via a clutch two-out RBI single by Brian Dempsey. Next, Chris Galland reached on a fielder’s’ choice before showcasing his speed, scoring all the way from first base on a Dante Baldelli single to tie the game.

BC managed to take its first lead of the series in the fourth inning, benefitting from Clemson’s pitching struggles. After a walk to Alu and an error put two men on, a well-executed sacrifice bunt by Anthony Maselli moved the runners over with one out. A wild pitch scored Alu, completing the Eagles’ early comeback and giving them a one-run lead.

Unfortunately for BC, its pitching couldn’t hold on—a familiar story in the early going of this season. In the fifth, Jordan Greene walked to lead off the inning before Davidson doubled down the first base line, tying the game. Eagles head coach Mike Gambino went to his bullpen to try and end the inning, but a wild pitch from replacement Joey Walsh scored Davidson from third and put the Eagles back into a hole. Beer then launched his third home run of the series to right-center, giving Clemson a 5-3 lead it’d never relinquish. The Tigers managed to tack on another run in the seventh, thanks to a line-drive home run to left off the bat of Greene.

The Eagles’ best chance to climb back into the game came in the eighth inning. A walk and two hit batters loaded the bases for Jake Goodreau, but he struck out swinging to end the threat. Adding to BC’s misery, Clemson scratched across two more runs in the eighth, courtesy of a two-out, two-run double from freshman Bryce Teodosio.

In the second game, BC handed the ball to Dan Metzdorf, hoping he would be able to give the Eagles a boost—the junior was fresh off earning ACC Co-Pitcher of the Week honors. More early struggles, however, led to a 4-0 deficit for the Eagles after just one inning—one that they couldn’t overcome, falling, 9-4, on Friday night.

Metzdorf had trouble with his command from the get-go, walking the first two hitters he faced. Despite inducing a flyout, Metzdorf walked another batter before a fielder’s choice, and a Drew Wharton single plated the first two runs of the game. A passed ball and another sharp single into left field by Kyle Wilkie gave the Tigers a four-run lead before Metzdorf could escape.

The Eagles, held quiet early, finally managed to cut into the deficit in the fourth inning. After two quick outs, Gian Martellini laced a single into left field before Scott Braren crushed his first home run of the season into the left field bleachers to halve BC’s deficit.

After a troublesome first inning, Metzdorf settled down, not allowing another run and striking out nine batters before exiting in the fifth inning with runners on first and third and only one out. Fortunately for the Eagles, Thomas Lane entered the game and got them out of the jam.

Beer, a highly-touted MLB prospect, got to Lane in the sixth inning, crushing a home run down the right field line and extending the lead. A walk and a single by Robert Jolly followed to put runners on first and third with one out, chasing Lane from the game in the process. An ensuing fielding error and another single, this time up the middle by Wilkie, gave Clemson a five-run cushion heading to the seventh.

After the Tigers tacked on two more in the eighth, BC attempted to mount a ninth-inning rally. Alu led off the frame by doubling to center field before Maselli hit BC’s second home run of the game into right field, cutting the deficit to five. To close out the game, the Eagles went down in order, ending hopes at a late comeback and a series win.

BC’s early weekend series got off to a rough start on Thursday, as Clemson got to starter Jacob Stevens early, grabbing a 5-1 lead after two innings. It didn’t look back, adding five more runs and handing the Eagles a resounding 10-2 defeat.

Clemson wasted no time, taking advantage of Stevens issuing a pair of walks before a single loaded the bases with just one out. Jolly ripped a double into right field, clearing the bases and placing the Eagles in an early 3-0 hole.

BC managed to fight back in the second inning, in large part because of Galland’s one-man effort. He doubled, stole third base—which moved him to a perfect 14-for-14 on steals for the year—and scored after the attempted throw to third sailed into left field.

Clemson would answer, tallying two more runs of its own in the bottom of the second. After the Tigers managed to load the bases again, Williams singled sharply into left field, driving in two more runs and giving the Tigers a 5-1 cushion.

Stevens navigated the next three innings without much trouble, conceding just one hit and striking out three batters—even retiring nine of the last 10 batters he faced. Yet the Eagles’ offense couldn’t provide Stevens with much help. In fact, the lineup mustered just one hit off Clemson starter Jacob Hennessy in six innings—Galland’s second-inning double—and didn’t score a second run until the ninth inning, when Braren singled to center field with one out before Dempsey brought him home with a clutch two-out single.

The Tigers, meanwhile, kept adding to their lead against the BC bullpen. They tacked on two unearned runs against Zach Stromberg in the sixth inning thanks to an error, safety squeeze, and an RBI single from Beer, who would also account for Clemson’s final three runs in the eighth inning. The junior blasted a three-run home run, pushing the Tigers into double figures, and polishing off a dominant offensive performance in the series opener.

In a road series against an opponent that has historically dominated them, the Eagles never really looked competitive, losing the three games by a combined 18 runs. It was a clear reminder of where they fall in the conference standings. With the bulk of the ACC schedule yet to come, BC will look to shake this one off quickly.