Home » Remembering the Past, Eyes Toward the Future 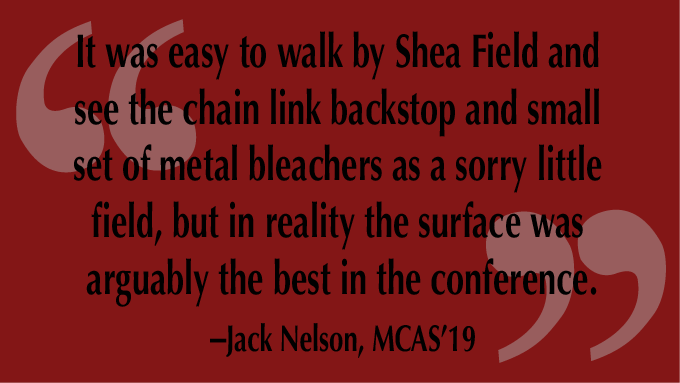 Remembering the Past, Eyes Toward the Future

Last week, Boston College baseball christened the new diamond on Brighton Campus. With fresh new field turf and efficient LED lights, Birdball battled Northeastern for a marathon 18 innings in a memorable first game. A project many years in the making, the new facility is representative of the new era of not just BC baseball, but athletics as a whole.

Even as we have begun play across Commonwealth Ave., I would like to give a requiem for Shea Field—it is hard not to get a little emotional remembering the field that Birdball called home for decades. It is tough to find words that can adequately describe having to avoid beer cans on a Sunday practice in the fall or finding students tanning in the outfield as we were about to have a September scrimmage. Then, there were the days when the field was so flooded, the ball would make a five to six inch divot in the mud upon impact. And yet, all these seeming inconveniences made Shea so special and so loved by all those that were lucky enough to call it home.

The thing that made everything worth it, though, was seeing all the fans lined up on the ramp. The rowdiness of the crowd on the ramp gave us an unmatched home field advantage, especially when perennial powers like Virginia or Louisville would visit the Heights. Taken out of their fancy state-of-the-art stadiums, those big schools were sometimes visibly rattled playing on a more simple setting like Shea while students would be raucous at the top of the parking garage. On a nice day, a baseball game would feel like a big party in the stands, and I think our play generally reflected that.

The grounds crew also did a phenomenal job creating, in my opinion, the best infield and mound in the ACC. It was easy to walk by Shea Field and see the chain link backstop and small set of metal bleachers as a sorry little field, but in reality the surface was arguably the best in the conference.

But I think what I will miss the most is the sense of pride everyone had when we finally played at home. We routinely spend the first five to six weeks of the season on the road, so by the latter half of March, the team was eager to finally play in front of family and friends on our field. In my two years in the program, the team has always taken off in April and May, and I believe much of this has to do with playing at home.

While every former player and fan will always have a soft spot in his heart for Shea Field, the Brighton Field is undoubtedly necessary to consistently compete with the top of the ACC. We will now be able to play earlier and more often at home, lessening the physically taxing and expensive cost of traveling for games. The unpredictability of New England weather is now neutralized as well because of the field turf. There would be times in the past when our games would be cancelled because Shea was still too wet from a rainstorm that occurred days prior. Yes, it will still be cold, but the snow and rain that threaten the region through the middle of April is no longer an issue.

For the program, having better facilities means that recruiting will become easier. While not known as a baseball hot bed, New England has many, many talented baseball players that have, in the past, flocked to big schools down South because of the greater commitment and investment in athletics. But now, that is changing as BC has a legitimate baseball stadium and facility that will only continue to grow and transform the program in the future. Better facilities bring better players, which brings sustained success and competitiveness.

From my own perspective, the new Brighton Field is an incredibly comfortable place to play as well as watch a game. With larger, heated dugouts and a spacious bullpen, the new stadium has everything a pitcher could possibly want. Plus, the park plays much bigger than its standard dimensions show.

From a fan’s perspective, the concourse is replete with box seats that are quite close to the action. It’s a very nice setting to enjoy high level baseball on any given afternoon or evening.

From a larger perspective, I believe the new Brighton Field represents not only a new dawn for Birdball, but for BC Athletics as a whole. Since Martin Jarmond became athletic director, there has been a palpable change both in the energy in Conte Forum and in the play of our teams this year. Both football and basketball are much improved, while other sports such as women’s lacrosse are in the midst of a historic season. The new (and necessary) construction of the indoor football practice facility and other projects that continue to be built will serve as the key infrastructure for—what I believe—will be BC’s return to athletic prominence.