Home » The Wizarding World of BC 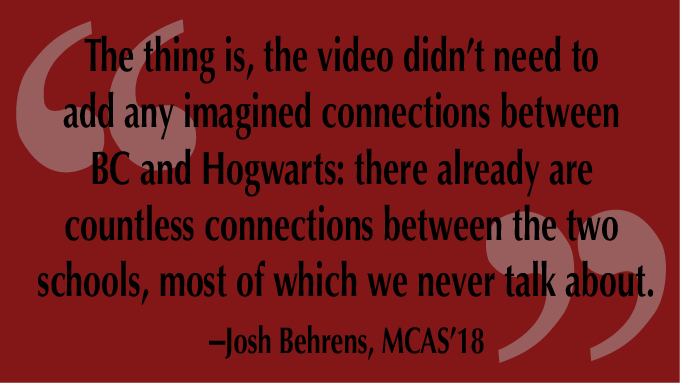 The Wizarding World of BC

Boston College dropped its best admissions video yet last week—a Harry Potter-themed video welcoming the incoming Class of 2022 to the Heights. At nearly 200,000 views in addition to features in articles from news organizations like CNBC, the video is clearly a success.

The concept of comparing BC to Hogwarts is far from new. I’m 99 percent sure every single tour guide takes their group through Bapst and says, “this is our Harry Potter library.” I certainly got the whole “HP library” spiel on both of my tours as a prospective freshman four years ago. John Walsh’s video adds more magical comparisons to the cliché Bapst = Hogwarts refrain as eagles deliver acceptance letters to prospective students, students explore dark halls with lamps in hand (which would never happen here due to BC’s tyrannical policy on candles),  candles float in Bapst (see my last parenthetical comment), an admissions officer reads an enchanted edition of The Heights (I couldn’t help but imagine how much moving images would enhance my columns), and homework is handwritten with a quill (thank God for laptops). The thing is, the video didn’t need to add any imagined connections between BC and Hogwarts: there already are countless connections between the two schools, most of which we never talk about.

First off, just like Hogwarts, we have four houses. I have heard many a debate about which college parallels which Hogwarts house, but there is a clear answer that is 100 percent accurate: CSON is Gryffindor (because they bravely save peoples’ lives every day); Lynch is Hufflepuff (Lynch students are the most loyal, dedicated, and patient Eagles by far); MCAS is Ravenclaw (the focus on a diverse education translates to Ravenclaw values of wisdom and learning); and CSOM is obviously Slytherin (if you need this explained, you’re definitely a Slytherin). There are great students in every “house,” but it is no coincidence that there tend to be more Malfoy-like bros in CSOM (rich, entitled, legacy students often riding the coattails of their successful fathers). J.K. Rowling even wrote about Slytherin: “These cunning folks use any means to achieve their ends.” Sound familiar?

Just like the quaint village of Hogsmeade down the road from Hogwarts, we have Cleveland Circle. BC students have two favorite “pubs” just like Hogwarts’s two favorites: The warm and welcoming Three Broomsticks is like Cityside, while the dingy Hog’s Head Inn is like MA’s. Now abandoned, the old Agoros building (RIP) takes the role of the Shrieking Shack, a terrifying place filled with hazy memories of regret. Kung Fu Tea is our Madam Puddifoot’s Tea Shop, CVS is the Magic Neep grocery store, and Reservoir Liquors is J. Pippin’s Potions (watermelon Rubi will make any freshman transform into another person faster than Polyjuice potion).

Another obvious analogy is our Gothic architecture that looks like Hogwarts’s flying buttresses and parapets (side note: I’m so happy I finally have a reason to put the term “flying buttresses” into one of my columns), but less often acknowledged is the way our other buildings emulate other parts of Hogwarts’s architecture. Carney, with its crumbling walls and leaky floors, is just like Hogwarts’ dungeons. BC has nearly as many stairs as Hogwarts’s 142 staircases, and our stairs can certainly feel like the moving staircases in Hogwarts after a few too many “butterbeers.” We have a lake bordering our campus like Hogwarts’s Great Lake, but unfortunately no self-propelling boats to safely bring us across.

Sadly, we can’t travel by broomstick either, but we do have the BC bus, which is even jerkier than the Knight Bus. The MBTA’s B Line is our very own Hogwarts Express, albeit with 1,000 percent more stops and 97 percent fewer magical candies.

Speaking of broomsticks, our intramural sports embody the competitive culture of quidditch because we get just as enthusiastic for our friend’s intramural soccer game as we do for a Gryffindor vs. Slytherin quidditch match. Not to mention the Beanpot, which is just like the Triwizard Tournament as we face the same three schools in a contest to see which school will come out on top and claim all of the bragging rights.

We have many fantastic beasts. Much like Ron’s pet rat Scabbers, Walsh and Iggy residents have lots of pet rats, too. Even though he has been inactive as of late, the BC Tickler is our very own basilisk, prowling the streets of Foster and Kirkwood, temporarily petrifying students. There’s a strange monster that stalks the halls of sophomore dorms and destroys ceiling tiles. And, I know for a certifiable fact that the second floor of Walsh is haunted, though my roommates and I could never pin down if the ghost was friendly like Nearly Headless Nick or mean-spirited like Peeves.

BC’s ‘headmaster,’ Rev. William P. Leahy, S.J., is a far-cry from the warm, friendly Dumbledore (who also happens to be gay and would have a hard time finding a home at BC anyway, which the New England Classic hilariously pointed out). No, the better, albeit imperfect, parallel is to the reclusive, rule-loving Dolores Umbridge. Funnily enough, Headmaster Leahy has also inspired a Dumbledore’s Army of sorts as seen with the thousands’ strong Silence is Violence March last November and the various anonymous chalking over the past couple weeks.

Despite the rats and Umbridge-esque headmaster and various beasts and too many Draco-like-dudes, I do love this place. As a senior, I am starting to feel just like I felt as I read the last few chapters of Harry Potter and the Deathly Hallows—a strange sense of palpable nostalgia for what will soon end. For the past three summers, I felt like Harry waiting at the Dursleys’, counting the days until I could be back at the Heights. I won’t have that this summer, and that saddens me. I know I ceaselessly critique this institution, but despite its faults, BC has inspired me to rise like a phoenix and set the world aflame, to become part of Dumbledore’s Army on and off campus—perhaps this is the greatest Harry Potter parallel of all.