On Saturday morning, Boston residents and poets gathered in the Commonwealth Salon at Boston Public Library to celebrate National Poetry Month. The event was hosted by the Boston National Poetry Month Festival, and was part of a week-long series of events open to the public. Viewers heard from leading poets and musicians in the Boston area, including Sam Cornish, Boston’s former Poet Laureate. Everyone was invited to sign up for the open mic performance.

“Welcome, welcome,” said Harris Gardner, Festival co-founder, as he stood greeting participants in front of the threshold of the salon, behind a table stacked high with books of poems for sale. In his right hand, he held a cup of coffee, and in his left, the sign-up sheet for open mic performances. A few drops of brown scattered the surface of the sheet. “I apologize for the coffee stains,” he told a woman as she considered whether or not to sign up. “But don’t be shy, participate! It will be fun, take my word for it.”

A little after 10 a.m., Gardner adjusted his beret, and took to the stage to introduce the first series of poets. The first to perform was Cheryl Buchanan, founder of Writers Without Margins, Inc., a nonprofit dedicated to promoting access to the literary arts throughout the Boston area. After spending more than a decade in the legal profession working on child sexual assault cases with the Archdiocese of Los Angeles, Buchanan left law to pursue her passion: poetry.

“The way I summarize what I used to do and what I do now is if you saw the movie Spotlight,” Buchanan said. “For a Boston crowd or at a Boston cocktail party thats my way of being able to condense the work I did for nearly a decade.”

She took out a folded up piece of paper, and paused. “A lot of my writing is actually an effort to pay tribute to the clients and witnesses that I worked for and with,” she said. Buchanan went on to read a poem titled, “25 Rules for Interviewing,” which detailed what she learned from the clients she served in L.A.

The next poets to take the stage were Zachary Alonzo and Marcel Harrison, two assistant facilitators from Writers Without Margins. Alonzo is a recovering heroin addict and convicted felon, recently released from state prison. Alonzo said poetry helped him overcome addiction, and that he plans to continue writing for the rest of his life.

Harrison is a recovering cocaine addict, who served 27 years in prison for robbery before being released on parole. He read a poem called “Don’t Just Survive,” which he wrote to cope with his past.

While most of the poets who took the stage were Boston natives, Sara Pirkle Hughes, an English professor at the University of Alabama, came to Boston just for the festival. The first poem she read was called, “Why We Couldn’t Stay,” which outlined the traumatizing memory of when she and her husband visited a chicken farm shortly after they got married. They went to the farm because the owner said they could live there for free if her husband cut the grass and she took care of the chickens, explained Pirkle Hughes with a laugh. “What happened next was horrifying,” she warned. “We didn’t know any better, we were young, poor, and innocent.”

The open mic event began a little after 11 a.m., and was hosted by Toni Bee, former Poet Populist of Cambridge. Ten poets performed, and topics ranged from melted ice cream to dirty socks. Martha Boss delivered a powerful performance about aging, and the beauty of fingernails, which she claimed never age, no matter how many wrinkles you get. “Take care of the ends of yourself,” she told the audience. “That’s what I tell my grandkids.”

The event lasted all day, until the library closed its doors for the night at 5 p.m. “Don’t worry,” Gardner told the remaining participants at the end of the event. “We’ll be back tomorrow and do it all over again.”

poetry boston public library national poetry month
Feeding the Body and Soul: Zambrero Emphasizes Social Impact
If You Ran the Boston Marathon, How Fast Would You Be? 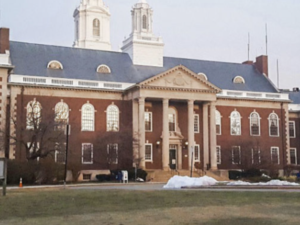