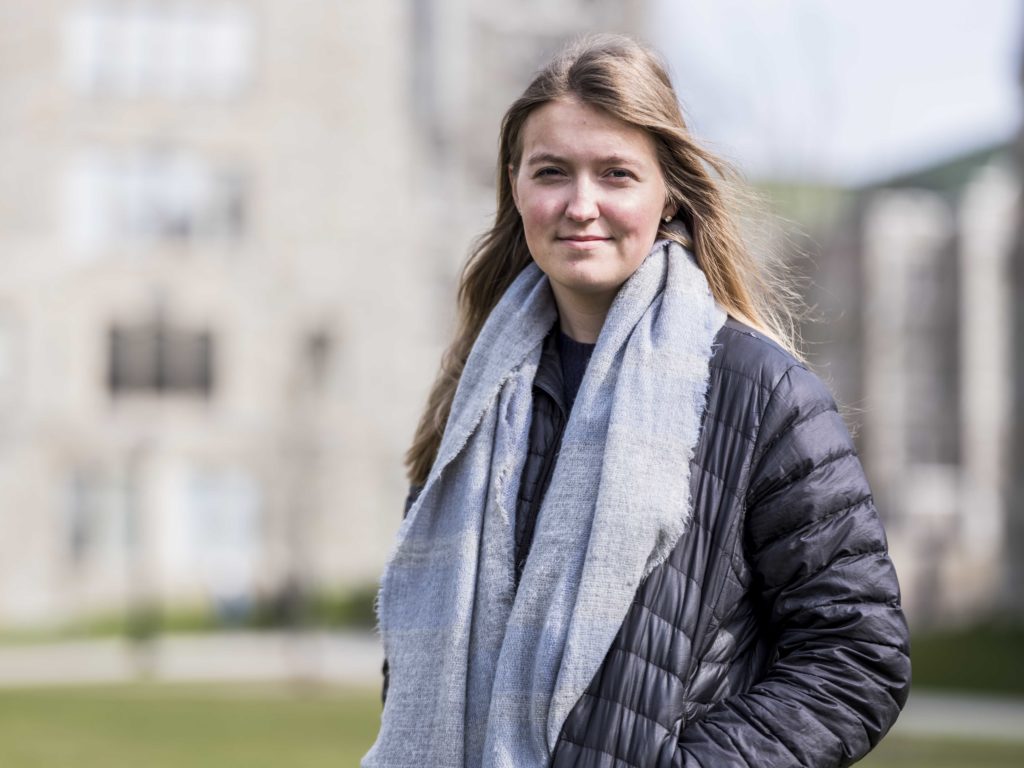 Carlson Given, MCAS ’20, and her sister, Tate Given, look exactly the same on the surface. Their blonde hair parts near the middle and gives way to their clear blue eyes. They share a birthday, clothes, and perhaps some twin-lepathy.

There are a lot of things that are similar about them, but there’s one distinct difference—Carlson can laugh without the residual pain of a brutal concussion radiating through her neurons.

During a ski trip their freshman year of high school, Tate endured a brutal head injury. She had to miss 18 months of school, and thus has only recently begun her freshman year of college at Trinity University in Connecticut.

“She wasn’t in school so she felt really cut off from people,” Carlson said.

The injury affected her whole life, and everyone in the Carlson family. Tate is back in school and doing better now, but she’s never alone. Every “hello” and “goodbye,” every meal, every new dress, every birthday, every Christmas, every eight hours of sleep, every waking moment—there’s a reluctant companion Tate just can’t seem to shake. Her name is headache.

“It was hard, I think, because she physically looked fine, but mentally she wasn’t all there,” Carlson said.

With her sister constantly in her mind, Carlson, who was on the rowing team freshman year, entered her Walsh eight-man. She walked into the dingy room and found two girls who were dead set on running the Boston Marathon—Bridget Hoffman, MCAS ’20, and Julianne Bourque, CSOM ’20

“Last year we made a pact with each other that we were going to run for a charity,” Bourque said.

Carlson didn’t know Hoffman and Bourque well—they had ended up in the same room because of mutual friends—but Carlson thought their plan was very cool and worth learning more about. She found that they weren’t just running the marathon, but doing it for others, as they are both raising money for the Dana-Farber Cancer Institute, a cancer research and treatment center.

“We’re not in it for ourselves,” Bourque said.

Dana-Farber is a cause which Hoffman and Bourque are extremely passionate about. On long runs, when the mind declares war on the body, Hoffman thinks not of quitting but of her father, who recently lost his battle to cancer. He gives her a reason for never raising a white flag while her muscles are screaming and her brain wants to be somewhere else.

Inspired by this, Carlson, who had only been roommates with Hoffman and Bourque for three or four weeks, decided to join them on their quest as soon as she found the right charity to run for. Though Hoffman and Bourque encouraged her to run for Dana Farber too, Carlson says she didn’t have enough of a connection with the organization. She wanted to do something for her sister and soon found the Gillian Reny Steppings Center for Trauma and Innovation, which was founded in 2014 by the Reny family to provide support for victims of trauma, specifically through promoting research and education on trauma and trauma care.

It’s a cause founded on sisterly love, just like Carlson’s marathon endeavor is. The young Gillian Reny was excitedly waiting at the finish line of the Boston Marathon for her sister, Danielle, was running on April 15, 2013, the day two homemade bombs were detonated– right next to Gillian.

She was rushed into the Brigham and Women’s Hospital trauma unit. For days, doctors doubted that they would be able to save her injured leg, but thanks to the their decisiveness and a few strokes of good luck, she did not have to amputate it. Carlson saw Gillian’s and her sister’s resilience in the face of tragedy as one and the same.

“I thought ‘oh, this is perfect,’” Carlson said.

After seeing the trouble her sister had after her injury, and all the lifestyle changes she was forced to make, Carlson is hyper-aware of the many burdens trauma victims carry, even years after their anguish. Tate’s concussion was horrifying for her, and all who love her.

Running a marathon is comparatively harder than doing other things, and a thing most people will never have the courage or discipline to attempt in their lives—it’s 26.2 miles of moving quickly when being still is a perfectly viable alternative. Carlson claims that she was by no means a runner before she started training.

“When I started back in September I was running maybe a lap or two around the Reservoir and dying,” Carlson said.

She keeps in mind that on the scale of hard things that one could potentially go through, having a healthy body and running down the street for a long amount of time is not the worst thing.

“So many other people have such big obstacles in their lives, it’s not a big deal for me to do this,” Carlson said.

She has currently raised $4,455 for charity, and Carlson has also gotten many positive things out of her training experience. Though both training and fundraising are a huge time commitment, she says that she has actually had a lot of fun, meeting all kinds of people and making new friends of all ages and occupations. She’s heard stories from them she’ll carry forever. She’s also sprinted through places she never would’ve ventured out to see on her own—like Wellesley.

“Without training for this marathon I wouldn’t have seen so much of Boston,” Carlson said. “I had no idea how much that was there.”

Carlson has gained two new best friends in her roommates, and probably a lot of social media clout Carlson that they centered a lot of their training around aesthetically pleasing, all-important food.

“We always designed our runs around a brunch place,” Bourque said.

Carlson’s friends helped make training fun. She enjoys running and all the adventures it brings her. She mostly loves doing it with other people, and found Christmas break difficult as the was running solo in the cold. Carlson values the support of the new community she has entered.

“I never really wanted to give up,” she said. “I guess I’ve been really determined.”

Because they have different start times, however, the three brunching, running musketeers may not get to do the actual race together, but they plan on trying to meet up somehow.

“We’re hoping we can find a way to find each other,” Hoffman said.

Carlson’s roommates both describe her as a hard worker, and as having an amazing attitude. They often see each other on the training routes even though they run for different teams and practice separately sometimes. Hoffman says that every time they pass each other, whether it be two or 10 miles into the run, Carlson’s face lights up, and her excitement to see her friends gives them the push they need to get going. She often shouts encouragement to them as she continues on her way.

“She’s always just got such a positive attitude about everything,” Bourque said. “We’re proud of everything she’s done … she’s putting in so much work.”

Bourque says that when they had to do their big 20-mile run, Carlson was the one who kept her going. Carlson presented the run in terms of the food they were going to eat after, reminding her friends of the calories that were to come at the finish line. Carlson has a joy about her when she talks about running and all of the pain that accompanies it.

“I already lost one toenail, and I’m going to lose more,” she said.

Though her consistently positive attitude may not be reflective of it, Carlson still approaches the marathon with the timidity and humility it deserves.

The enormity of the run looming before her is intimidating, but Carlson gets the support and encouragement she needs to push on from her roommates, her compatriots at the Stepping Strong Marathon Team, and of course, her twin sister who texts her with support and “good luck”s before every run.

Carlson, her sister, and those around her who knew her as a skier and rower may be surprised that she decided to run the marathon, but Carlson feeds off that shock and can’t wait for Monday.