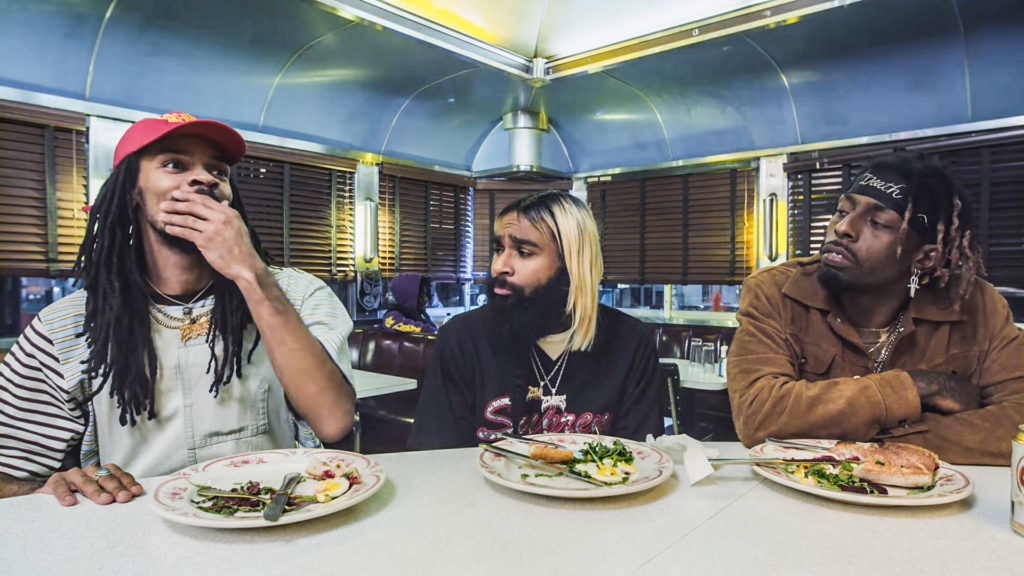 In an era of Soundcloud, Spotify, Bandcamp, and a variety of other music-sharing platforms, artists often find themselves seeking new ways to self-promote through rowdy or unusual antics. Rap trio Flatbush Zombies (composed of Meechy Darko, Erick Arc Elliott, and Zombie Juice) approaches and parodies just this very dilemma in their most recent music video, “Vacation (The Movie).”

As the title suggests, the video is more than just a montage of the rappers strolling the neighborhood while spitting bars into the camera—the Zombies take us into a bar in Flatbush, Brooklyn, where they discuss ideas for a music video that will earn hits on YouTube. Their back-and-forth is at first poignant and hilarious—Darko proposes “Vibranium condoms”—and provides an engaging meta-commentary to the actual music video for “Vacation,” which is shown in brief snippets. The conversation soon dissolves into a somewhat more serious rumination on each rapper’s musical career as the camera shifts to guest star Lin-Manuel Miranda, who criticizes the “Jeeps” and “Instagram models” that litter Elliot’s musical vision.

“You were next in the line of the great conscious rappers,” says Miranda, listing off names like Common and Mos Def.

With a change of heart, we see a different version of the video—where Elliot is stumbling naked through snow, hauntingly cooing lyrics that describe a deeply personal moral crisis. In contrast, Zombie Juice and Joey Bada$$ ride a yacht boarded with women gauzed in glue and glitter, their saturated saccharine get-ups bursting against the azure sky backdrop. Ice-T enters the bar in real time and tells Juice he’s the “flyest of the group”—a surprisingly lax summation of his character in comparison to Darko’s interview with actor John Leguizamo, who tells the crucifix-waving rapper that his projected “darkness” is just for show.

In the funniest bit of the video, Leguizamo asks Darko, “Ever seen an ex-con use his veins as dental floss?” Re-evaluating the authenticity of his stage persona, we leap in to a segment of a separate music video in which Darko sloshes around in a bathtub filled with blood, rapping over jangled piano chords that echo dissonantly. “I’m the darkest rhymer since DMX dropped that album with blood all over his body,” raps Darko. In the end, the three leave the diner, still wondering how they’re going to promote their album. “Put the hook at the end of the video,” says Darko—and in suite, the chorus for “Vacation” starts blaring over the cooly neon lit street scape.

lin-manuel miranda flatbush zombies vacation (the movie) john leguizamo joey bada$$
Will I Finish My Thesis?
Rogen’s ‘Blockers’ is the Perfect Mix of Heartfelt and Hilarious 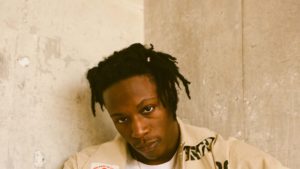