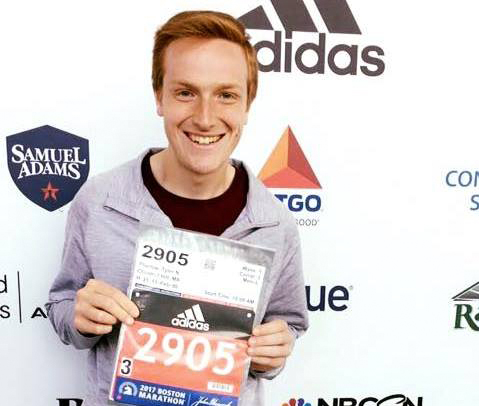 Serial Marathoner Looks For One More

Marathon runners are used to people being baffled by what they do. This is especially true when you run as fast and as frequently as senior Tyler Thurlow, CSON ’18, who ran his first marathon his freshman year and will be completing his seventh next Monday.

The Philadelphia native was never even on his high school track or cross country team. In fact, he only ever competed in organized running once for two and a half months in seventh grade, when his friend challenged him to. Now, he’s running marathons in under three hours.

When Thurlow was a junior in high school, he decided to give running a try as a way to lose weight. By the time he finished his senior year, he was completing 10-milers and had run the largest one in the country, the Blue Cross Broad Street Run, which takes place in his hometown. Naturally, when he decided to come to Boston College, it became a dream of his to run the Boston Marathon.

Thurlow’s dream ended up coming true, and he became one of the lucky few who gets to run Boston as their first marathon—as the race needs to be qualified for and only has limited spots open for charity runners—when in February 2015 the BC Campus School got a bid from an anonymous donor late in the marathon process. An email was sent out to the student body asking someone to run on the Campus School’s behalf, and Thurlow jumped at the chance.

“I ended up raising a significant amount of money for them in a span of a two-month period, which was probably the most stressful two months of my life,” he said. “I ended up running for the Campus School as a freshman, and … I just leapt at the opportunity to keep running marathons. And here I am.”

That Patriots Day morning, however, not only was it frigid in Hopkinton, Mass., but while Thurlow was waiting to start the race, it began pouring rain. Since he was running for charity, he was in the last group of people to leave in the race’s staggered start system. Thurlow finally took off at 11:15—by mile five, he was soaked.

“Running in wet clothes and wet shoes for the next 20 miles is probably one of the least fun activities I could have ever imagined,” he said. “But honestly I wouldn’t trade it for the world.”

“I think what sold me on it was the fact that I didn’t stop—you know, nothing got in my way that day,” he said. “And I got to run with 30,000 other superheroes that day, which was really cool, and they all stuck through it.”

“He has such a passion for it,” Matos said. “He always tells himself, I’m going to run this marathon—and he does it. And it’s so amazing that he does it and doesn’t even complain about it.”

According to Matos, Thurlow’s love and passion for running transfers over into his nursing in the way he cares and advocates for his patients. In addition to being a nursing student, Thurlow also has a lot on his plate as a nursing skills lab tutor, nursing assistant at Beth Israel Deaconess Medical Center, and Walsh RA—so he uses running as time for himself and as a way to manage the stresses in his life.

“It’s pretty incredible when you’re able to just run and forget about what’s happening—whatever you have to do that day or whatever you still have to get done,” he said. “You can just be you, and just be one with yourself.”

Since Thurlow ran for charity his first time around, after that race he set his sights on what he calls the “gold standard” for runners: running a Boston-qualifying marathon. After achieving that goal to run last year’s Boston Marathon, he now returns as a second-time qualifier.

While Thurlow says Boston has always been his favorite marathon to run, he points to New York as the one he wishes he had appreciated more—and also where he experienced an important marathon-runner rite of passage.

In the New York City Marathon, runners start on the Verrazano-Narrows Bridge that connects Staten Island to Brooklyn, where they have a remarkable view of what’s to come.

But, as some runners end up on the top level of the bridge and others on the lower level, there’s an important catch.

“People had always warned me to make sure I stayed in the corral that’s in on the top of the bridge, and I never really understood why,” he said. “Sure enough, as I am running … everyone who wasn’t able to get to the porta-potties at the start of the race is now peeing off the side of the bridge … and I was like ‘What is happening right now, this can’t be real,’ but it was actually happening … and I was like, ‘Yeah this is really gross—I’m really glad that I’m here and not beneath.’”

“Now I always make sure I’m on the top tier of any bridge I run on,” he said.

While the experience of running a marathon in New York City stands out in Thurlow’s mind, he says there’s nothing better than a marathon route that passes by the school he attends. Marathon running, he pointed out, is generally solitary: You run by yourself, and the people—usually your family—who’ve come to watch you only see you at one point. But when Thurlow runs the Boston Marathon, not only does everyone along the route recognize the school he dons on his BC shirt—which Thurlow always makes sure to wear—but BC students line the course, and all of his friends are concentrated in one place where they can cheer him on.

“Nothing can compare,” he said. “It’s incredible.”

Thurlow emphasized that the process of running the Boston Marathon is a long time in the making: Runners usually run their qualifying race around 12 months in advance. As Thurlow is in the male 18 to 39 age group, qualifying for Boston means running the 26.2 miles in under three hours and five minutes, which, as he pointed out, is “no easy feat.” Nevertheless, Thurlow pulled it off, with 10 minutes to spare, in Chicago in the fall of 2016, when he ran his personal best of two hours and 55 minutes.

In that vein, he urges BC students to keep in mind what the day is all about this upcoming Marathon Monday.

“There are 30,000 people who are waking up at 5:30 in the morning, 5:00 in the morning, to run 26.2 miles—and for a lot of them, it’s a dream,” he said. “Those 45-year-olds who have been trying to do this for 25 years—this is their shot at the premier marathon in the world. I think that’s my … one little soapbox moment when it comes to Marathon Monday … Appreciate all the runners that run by, and share your support.”

“I think that BC does end up losing a little bit of that aspect of what Marathon Monday is about,” he said. “It is literally a marathon, not a sprint.”