Home » Will I Finish My Thesis? 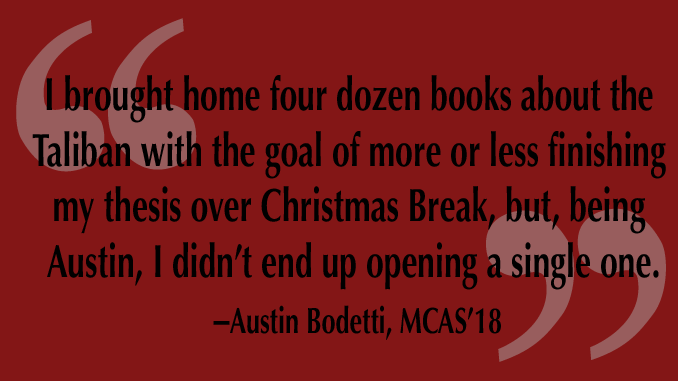 Will I Finish My Thesis?

Over the past few months, many of you have asked me, “Austin, why have your investigations for The Heights noticeably declined in quality since the legendary two-part Mattress Firm investigation of early 2018 (1 and 2), and, more importantly, how are you able to insert hyperlinks into speech?”

It all started back in spring 2017, when I had to pick a topic for my thesis. My junior-year youthful ambition prevented me from foreseeing the disaster that this thesis would become. “I’ll pick a topic that’s current but won’t quickly change on me while I’m writing my argument,” I announced to my imaginary friend, a fuschia cat named Walter, “assessing the potential for peace talks with the Taliban.”

Walter looked deeply unimpressed. “Why do I exist?” he asked.

“To add flavor to my column.”

“It will make sense to my readers.”

I decided to argue that the Taliban would never participate in peace talks with the United States. Why? It’s the Taliban. The argument would practically make itself.

The first few months of my senior year went well thesis-wise. My department, the Islamic civilization and societies program, required me to attend a seminar with deadlines every two weeks for sections of my thesis. By Christmas Break, I had four chapters of what I expected to become a nine-chapter composition, but this prediction assumed that I’d actually keep working on it when the seminar ended.

Everything changed when the Fire Nation attacked—I mean, when I became responsible for enforcing my own deadlines. Like most other college students, I lack any sense of self-discipline or urgency. I brought home four dozen books about the Taliban with the goal of more or less finishing my thesis over Christmas Break, but, being Austin, I didn’t end up opening a single one.

“At least I still have four months to work on this,” I told Walter when we returned to BC, my roommates wondering why I was talking to my own reflection.

“More time for you to sow your own destruction,” said Walter, who, being my imaginary friend, was an evil fuschia cat. I would discover, however, that the imaginary feline was right.

On Feb. 18, the Taliban penned a letter to “the American people” expressing a willingness to participate in peace talks with the United States, not a great sign for my thesis.

“This is good for Afghanistan but bad for my thesis,” I concluded. “Also, who writes letters anymore?” The Taliban. That’s who.

Finishing my thesis had just become that much more urgent. By then, Walter had left me in the middle of the night to embark on a quest to become a real cat. Stuck on my own, I reasoned that I would have to be creatively lazy.

The first step of my plan involved me cannibalizing two 15-page papers I had written in junior year, which were far better than anything a second-semester senior could compose. Next, I looked at my shelves full of over 100 Taliban books, which had likely made RAs extremely uncomfortable during room checks. “What do I do?” I shouted at my new imaginary friend, an onyx parakeet who then flew out the window that I had mistakenly left open.

Abandoned once again, I decided to open every book to a random page, get one Taliban fact, and return it to O’Neill, which had started sending me threatening emails about all the Arabic and Persian books that were two months overdue.

To the untrained eye, it now looks as though my thesis relies on a broad range of scholarly sources in several languages. To a reader of this column, though, it just looks like I’m extremely lazy.

My ingenious plan ran into a few hiccups, of course. In March, I got an undiagnosable throat infection that temporarily kept me from working on the thesis I probably wasn’t going to work on anyway. I was also a little skeptical of my Arabic and Persian sources, given that many used literal cardboard for covers and described the Taliban as “holy warriors.”

Still, I had to persist. To save time, I opted to skip one chapter altogether and combine another with my conclusion, which no one was going to read anyway because who reads a 100-page thesis?

All the while, I checked the news. The Taliban and the United States were making signs that they would approach the negotiating table. I changed my argument to an assessment of obstacles to peace talks with the Taliban, making my thesis less a position paper than a summary of the reasons that the Taliban sucks. Then again, I just needed my thesis to exist.

After I submit my thesis on April 17—in the process solving the mystery of whether I finish it because I’m the god of multitasking—you can expect columns detailing the origins of Rubinoff vodka and how much of your tuition BC spends on grass, assuming that Jack Dunn eventually answers my grass-themed emails. Until then, please proofread my thesis. Please.

academics student life bc thesis struggle can he do it? probably not oh well
Serial Marathoner Looks For One More
Flatbush Zombies Parody Rap Video Norms in “Vacation”