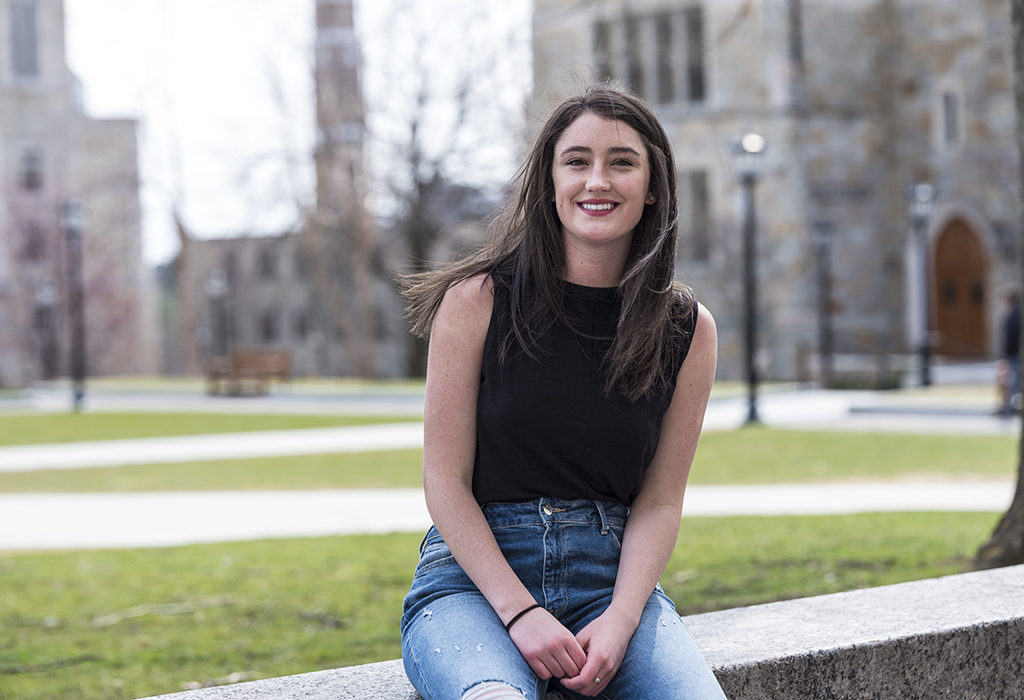 Figure Skater Strides for Her Stepmom

She chose her college with a coin toss and made a spur-of-the-moment decision to sign up for the Boston Marathon—but Lauren Healy, MCAS ’19, isn’t taking a chance on triumph.

Healy grew up in the quaint town of Littleton, Colo., surrounded by a myriad of animals including llamas, alpacas, and horses.

“In Colorado, in general, people are really outdoorsy, and so I grew up experiencing that and being really active and outside,” she said.

Healy’s family upheld this energetic mindset, spending their holidays a little differently than most. Rather than spending the Fourth of July eating ribs while donning red, white, and blue, they ran 5Ks, and Healy remembers this tradition spanning as far back as when she was about six-years-old. In high school, she continued her passion for exercise by joining the figure skating team.

Despite her love for Littleton, college decision season found Healy craving change. She narrowed it down to University of Michigan and Boston College. When choosing between them, she reverted to the unorthodox, yet tried-and-true, decision-making method of flipping a coin.

“People say if you flip a coin and you agree with it, it’s what you should do. The coin said BC, so here I am,” she said.

The selection she made proved to be the correct one, as Healy loves her time she’s spent as an Eagle on the Heights. She’s majoring in political science and plans on attending law school after graduation. In addition to participating in planning for EagleMUNC, BC’s high school model United Nations conference, Healy spends much of her time on the ice as a member of Boston College’s club figure skating team.

Of all her experiences at BC, Healy counts her two Marathon Monday’s as some of the most memorable. She remembers standing near White Mountain and El Pelon, clad in her BC gear, watching the runners go by.

“If you get to [mile] 21 you can get to [mile] 26, so I think BC’s in a really cool area, because you’ve seen people who are fighting for it,” she said. “You just cheer … I think the city really comes together.”

This past fall, Healy found that her desire to increase her physical activity with something in addition to figure skating coincided with a shocking and devastating loss. After being diagnosed with brain cancer and fighting a brutal fight, Healy’s stepmom passed away right before Thanksgiving.

“All of those emotions—not being able to do anything, and having somebody that you really care about just waste away was hard,” she said.

To cope, Healy turned to long-distance running. As her feet pummeled the pavement and the wind whistled through her hair, she felt the heavy weight of her emotions evaporate into the air.

“Running for me is a lot about healing and working things out … When you run, your body hurts, but your mind feels clear,” she said. “That’s my personal reason why I run. Whether it’s school or you’re fighting with your friends, or you’re just tired, or, it can be bigger things.”

As running grew to have a larger presence in Healy’s life, she found inspiration in her friend Charlie Butrico, MCAS ’18, who ran the Boston Marathon in 2017 on behalf of the Wellesley Education Foundation. He encouraged her to reach out to WEF Board member Cecilia Brooks, who said she’d love to have Healy run on behalf of the organization.

“I think that she’s a great asset and has the best personality to represent WEF because she’s got a lot of energy,” Brooks said.

The foundation relies on fundraising efforts to provides grants for public school educators in Wellesley to fill in the gaps that government funding can’t cover, such as science fairs, spelling bees, and school supplies—Healy has currently amassed almost $3,000.

“Her effort is very meaningful … there’s so many things we can fund with the money we raise,” Brooks said.

Even if Healy’s decision to participate in the race was spontaneous, given her lack of extensive experience—“It just kind of happened,” she said—there’s no denying that running the Boston Marathon is in her blood. A third-generation runner, Healy will follow in the footsteps of her mom, Krista Benner, who has qualified for the race five times, and her grandfather, Buck, who ran it twice.

“I honestly could not be more proud of her. I mean, there’s nothing that speaks to you more when you have a child that says ‘Mom, this is what I’m gonna do.’ And knowing that you share that with your dad, and running it yourself—to have your daughter do that is incredible,” Benner said.

When Healy told her mom she planned on running those strenuous 26 miles, she was a little surprised at first.

“[I was] completely taken aback. Lauren is not a runner, it’s never been her forte or passion. She’s a figure skater … [but] when she decided that this was what she was going to do, I just said, ‘Okay, let’s go. We’ll make it happen,’” Benner said.

For the past several months, Healy has embodied this can-do sentiment, rising every morning to her 5:30 a.m. alarm, pulling on her skates, and attending her two-hour skating practice until 8. After that, she’ll run for an hour and make it back with time to stretch and take a quick shower before going to her classes. To keep her body in peak physical condition, Healy gets lots of sleep, stays hydrated, and relies on a diet of lean proteins and iron such as spinach.

The training regime the marathon entails requires copious amounts of both dedication and discipline, an impressive feat that hasn’t gone unnoticed by Healy’s friends.

“As someone who would really just have to be held against their will to run a marathon, it’s awesome to see someone have the dedication to train … Sometimes I’ll see her leave for like, a 20 mile run, and then she’ll just come back and watch a movie with everyone,” Healy’s roommate, Veronica Agne, CSOM ’19, said.

Healy’s first month of practice took place in Littleton at an altitude of 6,000 feet, an introduction to training that was simultaneously arduous and rewarding.

This eased the transition back to Boston, and allowed Healy to begin increasing her distances upon her return to BC in the new year.

When running in Boston, Healy trains with her running partner Enzo Butrico, MCAS ’19, Charlie’s younger brother. Running for roughly an hour a day and longer on weekends, they run around the Res, exit near Mary Ann’s, then follow the T-lines for about 6 miles until they arrive at the Boston Common. From there, they have infinite possibilities—some days, they’ll run down to the river, and others will find themselves exploring the bustling metropolis. When running through the suburban areas, she and Enzo will play a game of “Would you live in this house?”

“A huge part of really long distance running is distracting yourself, finding cool things—that’s why I like to run through the city,” Healy said.

She’ll find her routes dotted with dogs and filled with families waiting on the sidelines with reinforcements such as water cups and pretzels. Upon sighting runners sporting Boston Marathon jackets, Healy feels a flutter of excitement, thinking, “You did it, that’ll be me!”

The Boston Marathon will be Healy’s first marathon—but she does have a half-marathon under her belt. Her sophomore year, she ran the Chilly Half Marathon in Newton with her mom. Held in a region of the suburb known as “The Newton Hills,” the race proved difficult as it combined Healy’s first time truly running with a taxing track. Though unpleasant, this hill training was necessary to help prepare her for miles 16 to 20 of the Boston Marathon, which feature three hills—with one of them being the infamous “Heartbreak Hill.” Many feel that this is the hardest stretch of the Boston Marathon.

In addition to cross-country, Healy took her training abroad on her recent Spring Break trip with friends to Portugal. She could train with the beautiful views of the tranquil ocean or the buzzing city, even seeing a castle on one of her runs. Since Portugal is set on a hill, Healy could escape a week of school, but much to her chagrin, not a week of hill training.

The weekend of her return from Portugal, however, Healy’s training took a turn for the worse when she strained her hamstring and scarcely ran the following week, missing two crucial long runs. As Benner noted, one of her biggest pieces of advice to her daughter was “You have to make the runs. You just have to run.”

“It was close enough to the race day and peak time for training … I was nervous I wouldn’t be able to do it,” she said. Pushing through the pain and doubt, Healy worked with BC’s club sports physical therapist, and through rehab and recovery, she soon got back on track.

When running through the city one day, Enzo Butrico asked Healy the question, “Who do you run for?” Two people immediately sprang to mind. Both passed away, and both huge influences in her life, her grandpa and her stepmom will be on her mind throughout the 26 miles. “I wish they could be there,” said Healy, in tears.

One person to cheer Healy on with unconditional love and support both on the day of the race and always is her mom.

“She is everything you would wish for as a daughter, as a person, as a human. She’s just incredible. She’s honest, she’s giving, she works so hard … I don’t think there’s enough I could say about her,” Benner said.