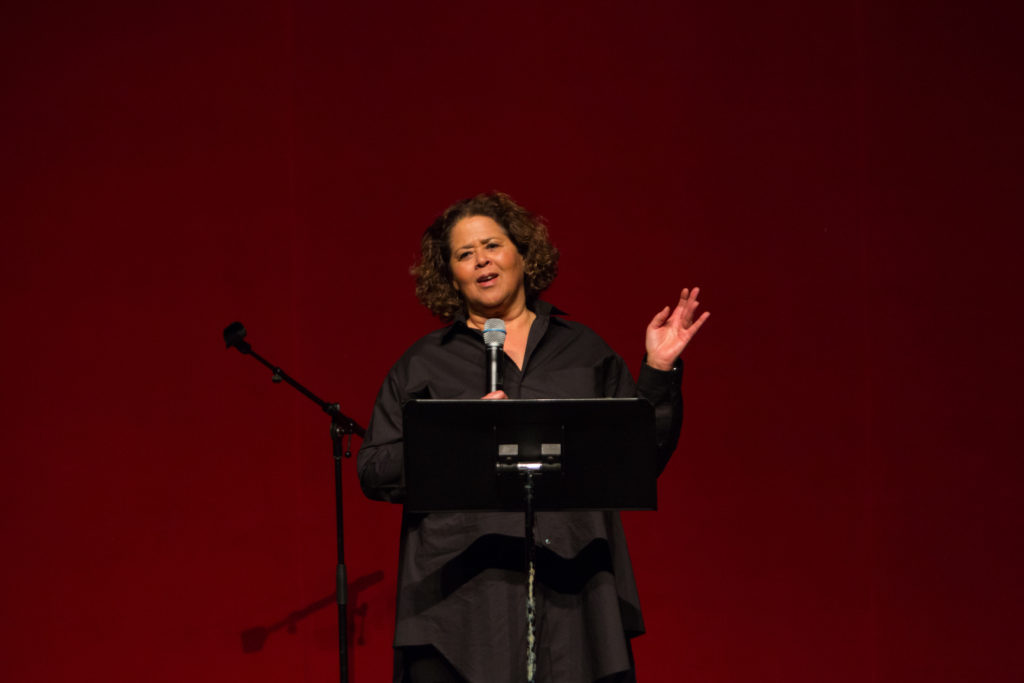 Actress, playwright, and New York University Tisch School of Arts professor Anna Deavere Smith took to the stage in Robsham Theater on Tuesday evening to perform excerpts from her most recent play, Notes from the Field: Doing Time in Education. Acting out her one-woman show, Smith adopted the persona of the people she interviewed as she traveled to investigate the school-to-prison pipeline.

She has received one of the most prestigious awards for the arts, the Dorothy and Lillian Gish Prize, as well as the National Humanities Medal. She has acted in The West Wing, Black-ish, and Madame Secretary, as well as written plays such as Fires in the Mirror and Twilight: Los Angeles.

Notes From The Field is the centerpiece of her larger undertaking, “The Prison Project,” which exposes how the lack of resources available to children in poverty acts as a gateway to the criminal justice system.

Smith introduced the concept of her latest play by explaining that students of color, students with disabilities, and LGBTQ+ students are disciplined more often than their counterparts, following a report from the School Discipline Consensus Project, conducted by the U.S. Departments of Education and Justice during the Obama administration. In turn, these children are more likely to be suspended or expelled, potentially leading to their placement in a detention center.

The first excerpt centered around Sherrilyn Ifill, president and director-counsel of the NAACP Legal Defense and Educational Fund. Ifill spoke about the United States’ role in investments—from the money invested in the population after World War II to create the white middle class to the current investment in expanding the criminal justice system. She examined the way that incarceration is intertwined with the education system, which Smith also delved into further later on.

Her next performance was a reading from an interview with Kevin Moore, the man who recorded the video of Baltimore resident Freddie Gray being arrested by police officers shortly before he died in police custody from a severe spinal injury. As she spoke, she adopted not only his tone but also his body language, moving her arms and expressing emotions of disbelief and disgust as she brought the encounter that he shared with her to life.

She returned to the topic of the school-to-prison pipeline with a fisherman from the Yurok Tribe in California. He recalled the troubles of his youth—by the time he turned eight-years-old, he had already been expelled from two schools.

As Smith went on, she spoke faster and faster until the audience almost couldn’t keep up with the turbulence of his education—or lack-thereof—until he stated that he was the first of his friends to be put in prison. At this point, he explained the change in his character. He, through Smith, described the ways in which prison took all of the caring out of him, until the thought of stabbing someone no longer brought about even an instant of hesitation.

Smith transitioned to the state of South Carolina, where a high school police officer, Deputy Ben Fields, wrestled ninth-grader, known as Shakara, to the ground. Smith alternated between the voice of Niya Kenny, the videographer, and Amanda Ripley, an investigative  journalist who reported on the case.

She outlined the order of events, which resulted in Kenny being arrested and transported to an adult detention center herself. This rapid chain of events was another example of the way in which some students have suddenly found themselves in prison—something that the next interviewee, a student concern specialist in North Charleston High School, believed to be the result of children’s “disrespect” for authority.

Smith then took a minute to share her experience at a school in Oakland, Calif. There, she sat in a room with about 40 girls and asked them to share who their role models were—the girls responded with household names like Oprah, Queen Latifah, and Beyoncé, as well as their mothers.

She thought back on this question, wondering why it appears that children are always asked to name individuals that they look up to. She suggested, instead, that they should be encouraged to look inward and find the power that resides within themselves.

Her final reading was that of the interview of Congressman John Lewis as he recounted the abuse he faced in Montgomery, Ala. in the 60’s. He shared the stories of the apologies he received 50 years later, one of which came from a young Montgomery police chief, who spoke on behalf of the officers who came before him. The other that came in 2009 from a Klansman who beat Lewis in 1961.

During this segment, Smith, performing in character as Lewis, called on the audience to sing “Amazing Grace,” as Lewis accepted the apologies from both men.

As she ended the evening, she received a standing ovation from the audience, followed by a question-and-answer session, during which she fielded questions pertaining to the difference in word choice between “Black” and “African American” and the prevalence of intersectionality in today’s world. At one point, she answered a question about her experience returning to her home of Baltimore, Md.

“I really felt this was my way of going back home.”