Things were going beautifully for Boston College softball. The Eagles had snapped a 28-game losing streak against No. 13 Florida State in the first game of the doubleheader, winning 1-0 behind Allyson Frei’s masterpiece, and held a 4-0 lead entering the sixth frame of the second game.

Jessica Dreswick seemed determined to match her counterpart’s performance, as she had yet to allow a hit and was cruising. Then, the wheels came off. The Seminoles spoiled a chance at BC winning the series on the first day, scoring five-straight runs to escape with the 5-4 win in the nightcap.

It was a tough pill to swallow for the Eagles (22-16, 9-4 Atlantic Coast), who were in firm position to win their first-ever series against a group that historically has dominated them. Still, it was a more than adequate showing against a talented FSU (35-8, 12-2) team as they saw their win streak peak at 13 games.

The loss in the second game was both a product of a meltdown inning and the inability to finish off chances. BC outhit the visitors, 12-3, but left 11 runners on base, while the sixth inning was a frustrating turn of events.

Trailing 4-0, the Seminoles loaded the bases with one out after a walk, a single, and a hit batsmen. Seminoles outfielder Zoe Casas grounded one back to Dreswick, who came home with it—but the ball got away from catcher Jordan Chimento and two runners crossed the plate. FSU’s Elizabeth Mason grounded one to Emme Martinez at third, and she too would come home with it, but to no avail—Chimento was called for obstruction, an infraction that frustrated Eagles head coach Ashley Obrest and prompted boos.

Now with a slim one-run lead and two in scoring position, Dreswick struck out a batter to get down to the final out. A win wasn’t in the cards, though, as Leslie Farris looped a sinking line drive into left field, bringing in two runs to hand the Seminoles their first lead of the series.

BC would get two chances to tie it up, but couldn’t. Chloe Sharabba roped a one-out triple in the bottom of the frame but was stranded, then two runners were left on base in the bottom of the seventh. It was a  rough sequence for the Eagles, as they had plenty to root for in the early going: Sharabba and Annie Murphy doubled back-to-back for the games first run, then Murphy added a two-run home run in the next inning. C.C. Cook also chipped in with a RBI single.

In the first game of the doubleheader, BC pulled out a slim 1-0 win despite the Seminoles being the odds-on favorites, especially in terms of history. FSU arrived in Brighton this weekend with a near-spotless ACC record and the conference lead in runs, doubles, triples, home runs. The Seminoles had won 37 of their last 38 conference games, a remarkable record, and several of those games at the expense of Frei—who was 0-6 all time against them.

The history didn’t matter, though. The redshirt junior spun a gem, allowing just two hits and working around four walks while striking out eight in a complete game shutout, winning 1-0.

She was equally matched by Seminoles starter Meghan King for much of the game, who entered with a slight edge in ERA. King kept the Eagles on their heels throughout, allowing just four hits and a walk while striking out nine. Yet, the decisive run, one that proved to be all Frei would need, came in the fourth inning.

After Martinez drew a walk and moved to second on a wild pitch, Carly Severini grounded a ball to third base. It kicked off Jessie Warren’s glove, then skipped off shortstop Cali Harrod’s as well. In the confusion, Martinez hesitated, then attempted to break for third—where she was promptly thrown out. The few groans emitted from the assembled crowd were well warranted, as the game had been one of inches and it seemed like the Eagles had just spoiled one of their first real chances at getting a runner 60 feet from home.

On King’s very next pitch, though, Lexi DiEmmanuele sent a fly ball to left field. FSU’s Casas appeared to be caught off guard, and stabbed at it as it floated over her head. It nicked her glove but she couldn’t pull it in, sending Severini off to the races. She scored from first without a throw, while DiEmmanuele slid into third, emphatically leaping up after.

Meanwhile, Frei was dealing. Each time she faced trouble, either she or her battery-mate in Chimento would get BC out of it. In the second, she coughed up a leadoff double—then responded by striking out the side. In the fourth, a leadoff single and a pinch runner set up Chimento to gun her down at second.

The next real chance for FSU came in the sixth. After getting an out on the first pitch, Frei grappled with her command. With Dreswick warming up in the bullpen down the left field line, Frei issued a one-out walk to Carsyn Gordon. After her next pitch was a ball as well, the pitching coach emerged from BC’s dugout to talk. Frei stayed in, though, and Chimento had her back.

Despite a pitch that one-hopped in the dirt, Chimento came up firing and got Gordon with a perfectly placed throw. After Frei got an inning-ending groundout, she looked at Chimento when the duo got into the huddle and her eyes widened, laughing at the quality of the throw.

In the seventh, with the crowd tense—people rocking back and forth, legs bouncing up and down—Frei returned to the circle. She issued a one-out walk, but bounced back to get a strikeout. With everybody ready to erupt, from both BC’s dugout to the fans standing on the concourse, Anna Shelnutt floated a fly ball to straightaway center field. Frei turned and watched as it slowly fell into DiEmmanuele’s glove, sparking a gleeful celebration to the left of the circle, where the star of the hour was wrapped up firmly in an embrace by Sharabba.

On March 18, BC watched as—despite Dreswick’s complete game effort—it was blanked by Duke in the series finale, swept out of its first ACC series in convincing fashion, and falling to six games under .500. A little under a month later, the Eagles are singing a different tune.

Sure, they squandered a four-run lead in the second game, but the fact remains: The Eagles opened a weekend series against one of the countries best teams with a split, impressed both on the mound and at the plate, and are solidifying their position as contenders to make a late-season run. 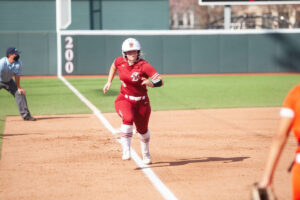